‘Allegiant’: Stepping outside their dystopia on dreary, action-filled path to a final film 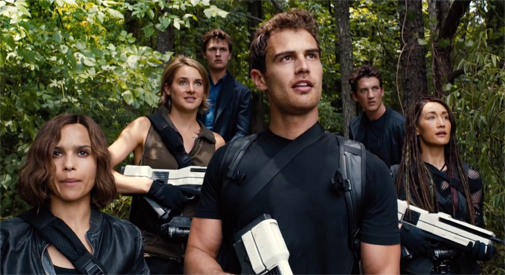 ‘Allegiant’: Stepping outside their dystopia on dreary, action-filled path to a final film

Never having picked up a book from the “Divergent” series, I’ve gone into each film relatively blind and have tended to be more forgiving of their missteps than others. Nonsensical though they might be, I was able to sit through the first two films, decently entertained and charmed by Shailene Woodley’s committed performance. But with “The Divergent Series: Allegiant – Part 1,” the final book of Veronica Roth’s series is split in two and the series has lost all momentum, playing more as a warped rehash of the previous “Insurgent” than as its own film. The idea of splitting these books into two is based on the thought that there is too much material to adequately fit in one film – but really it’s little more than a cash grab. (See “The Hobbit” trilogy, for example.) 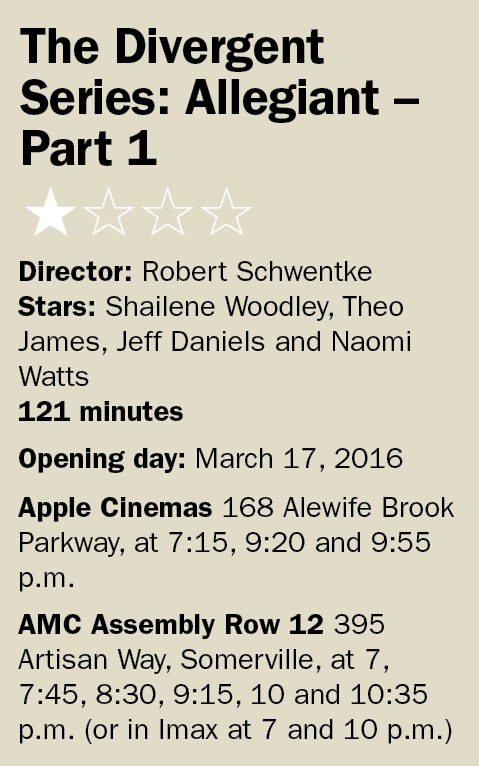 “Allegiant” commits the narrative sin of having its characters end the film as they began it, playing nothing more than a thinly structured steppingstone to the fourth and final film. Audiences leave the theater wondering at the point.

It goes as follows: Our usual youthful revolutionaries are back in the form of “special” Tris (Woodley), Jason Bourne lite Four (Theo James), Tris’ buffoonish brother Caleb (Ansel Elgort) and the backstabbing Peter (Miles Teller), who you’d think the group would have done away with by now. They’ve been invited to go outside the wall that guards Chicago (or what’s left of it) by the benevolent benefactor David (a smarmy Jeff Daniels), who tells Tris he wishes to use her genetic “purity” to help society’s future. He has no interest in those he considers “damaged,” including divergents.

The plot is unsurprisingly convoluted, and when it tries to clarify it ends up only making things muddier, sidestepping plot progression and character development for simple action. A character takes an action and explains why (or doesn’t) but we’re never allowed to see why they’d be making the decision in the first place. It’s perplexing to watch – the film will spend a substantial amount of time watching Tris shower but can’t give a moment to Evelyn (Naomi Watts) that helps showcase her motives against Johanna (Octavia Spencer). The film is based on guesswork, making the audience try to piece the picture together as it makes one ridiculous misstep after another.

The hero, Tris, is sidelined as the focus and hero’s journey is transferred to Four. And while James has an amiable, charming presence, his characterization up to this point has been somewhat void. We learn most about him by being told rather than shown.

As though to emphasize this, while CGI in film has never been bothersome to me, because it’s typically done with enough skill to avoid distracting, “Allegiant” waves its poorly rendered, cartoonish computer graphics effects in the audience’s faces. The fight sequences Four engages in, meanwhile, are superbly shot, all wired, kinetic energy. Shot often in close quarters, they highlight James’ physicality, skilled stunt work and some great choreography, giving the fighting a level of reality that delivers real impact. Tris and friends flying in beehive-like bubbles over physics-defying skyscrapers diminishes it.

“Divergent” was far from a perfect film, but it was fun, vibrant and playfully scored, and it played with allegorical themes of teenagers finding themselves and discovering who they are outside of society’s confines. By the end of “Allegiant” it’s turned into nothing more than a bleached-out, dreary film about mysterious political figures playing god with a civilization, something we’ve seen before and better in YA adaptations “The Hunger Games” and “The Maze Runner.” This tour of the borders of dystopia takes itself seriously, but the audience would prefer walking into something exciting and fresh instead.