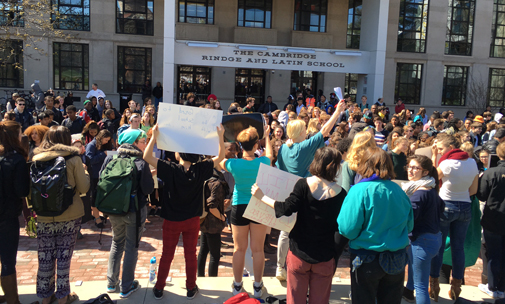 Students linger after the end of the school day Tuesday at Cambridge Rindge and Latin to participate in and watch a protest in recognition of Sexual Assault Awareness Month. (Photos: Jean Cummings)

“Any girl at Rindge on any given day can’t go 30 ft. down a hallway without some dude staring at your butt and whistling or being like ‘damn, girl,’” read one sign. “I’ve heard a male teacher describe a woman as ‘a B****,’” read another.

These were some of the two dozen signs held by Cambridge Rindge and Latin School students during a walkout Tuesday, staged to raise awareness during Sexual Assault Awareness Month. At least 150 students gathered in support as the protesters, holding hand-written signs with anonymous student comments, lined up outside the front entrance of the school. 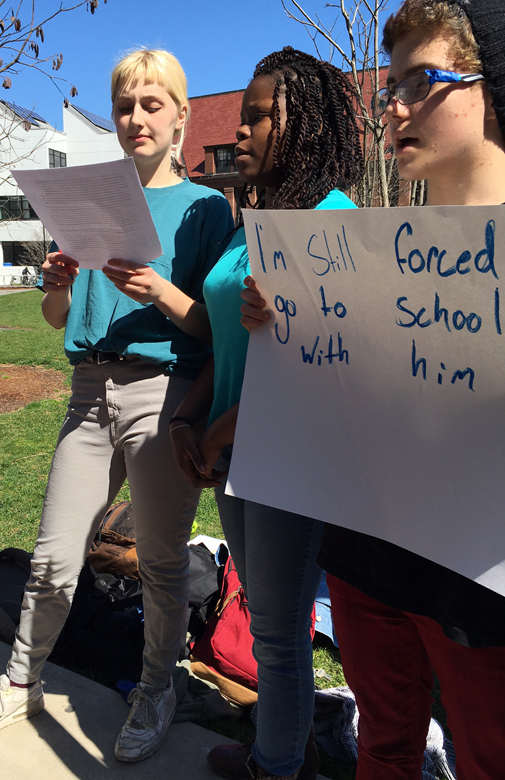 Klara Ingersoll, left, is founder and leader of the high school’s Club 1, the Feminist Club.

“We are doing this because we want some serious changes at our school,” said student Klara Ingersoll, who spearheaded the event as founder and leader of the high school’s Club 1, the Feminist Club, but also stressed that “the walkout is the result of other students who have been emphasizing sexual harassment this year” through work in clubs, classes and social media.

With male and female students lined up by her side along a low wall, holding poster boards bearing anonymous quotes collected from students, Ingersoll led a group reading of a letter her club plans to present to the administration after collecting signatures. Dozens of other students listened respectfully and sometimes repeated key phrases. The signs had quotes from students who felt harassed by fellow students and, in some cases, faculty.

“Dear Cambridge Rindge and Latin administration,” the letter began, “many CRLS students walked out to demonstrate peacefully and civilly how destructive sexual harassment and assault are to the educational process for countless CRLS students.” Their intent, they said, was “to raise awareness of the extent and seriousness of the issue at the school [and] to ask the folks in charge to change things.”

Specifically, Club 1’s letter asked for a heightened awareness of the issue through a “shift in school climate,” which begins with “calling it what it is – sexual harassment and assault. It is not just ‘incidences’ or ‘bullying.’”

The group requested “thorough and transparent” processes for making and addressing complaints and that all staff participate in required training. Members made specific requests about how complaints should be handled – including giving a complaining student the right to determine which staff can be “in the room” to discuss the situation, give input on the scheduling of meetings that result and on when “parents and police will be brought in.”

Some of the signs shown Tuesday, with testimony from anonymous CRLS students.

The walkout began at 2:15 p.m., 15 minutes before the end of the school day. The crowd stayed attentive and lingered well past school’s end, managing to hear the letter-reading even as the rest of the student body left the school. Students lined up to sign copies of the letter when Ingersoll finished reading.

Principal Damon Smith, who with Superintendent Jeffrey Young watched the walkout, said he welcomed the students working through these important issues. He will be meeting with the leadership of the movement, he said, and “looks forward to continuing the dialogue.”

Smith said the school takes every report of sexual assault and harassment seriously and was unaware of any specific incident that spurred the student action. Students can report issues to a trusted teacher or their dean, or directly to his office, he said.

Many of the sign holders said privately that the major issue revolved around student behavior and that there was a general “culture” of kids saying things without risk of being called out for it. Most said they knew of a teacher they would go to if they had a concern, although one female student said she would not go to a male teacher she liked very much because he himself had made “inappropriate” comments about her clothing. (He told her upon seeing her one summer that she should put “more clothing on,” she said.)