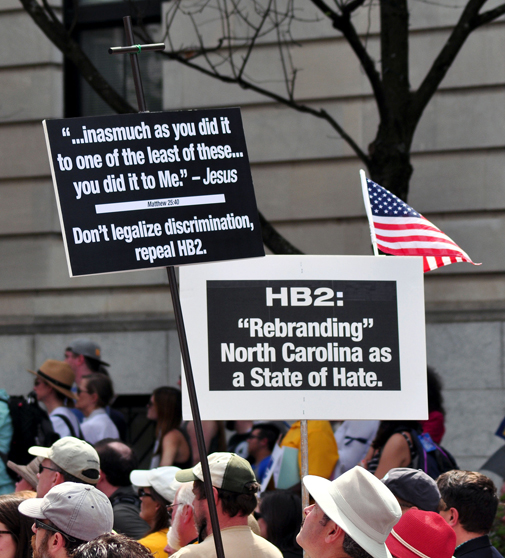 Cambridge’s stand against LGBTQ discrimination has been heard, but not adopted, by the National League of Cities. The 2,000-community organization is declining to move its 2017 conference from Charlotte, N.C., likely leaving Cambridge city councillors at home that week.

Having asked the city manager April 4 to ban all taxpayer-funded travel to North Carolina, councillors followed up Monday by adopting an order urging the League to move its annual conference – a response to an action last month by North Carolina’s state legislature called HB2, overriding an act by the Charlotte City Council allowing trans people to choose public restrooms based on their gender identity.

“To restrict our own travel is appropriate, but I also think it’s of greater important to say to the NLC, ‘not in our name’ – that we do not want our dues or our money or our patronage to go to a city that wants to discriminate against some or all of its citizens,” Mayor E. Denise Simmons said.

By letting Cambridge’s position be known, other cities and towns could follow, Simmons said, and the council adopted the order.

Clarence E. Anthony, chief executive and executive director of the National League of Cities, said Wednesday that several of the organization’s member cities have banned travel to North Carolina and asked whether the League would continue with its planned 2017 City Summit conference in Charlotte.

“The executive committee of our board of directors convened to discuss the issue and took a clear stand that NLC does not support HB2 and its preemption of cities’ rights. We stand with Charlotte – and all cities – in the fight for local control. That’s why NLC is not currently planning to move its conference,” Anthony said.

“Moving the 2017 NLC City Summit from Charlotte would do more to hurt the city than it would the state,” he said. “Charlotte’s City Council took a stand for the principle of local control and equality. NLC is taking a stand to support the City of Charlotte.”