Proposed changes to rules for restaurants may shake up alcohol ‘cap areas,’ finances 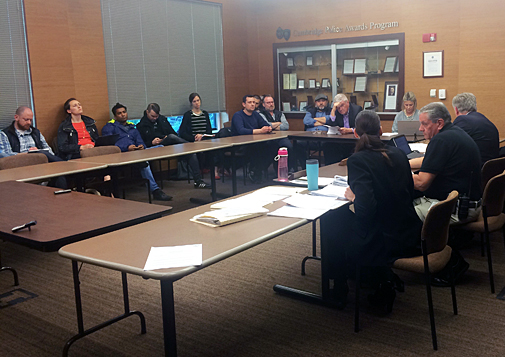 Proposed changes to rules for restaurants may shake up alcohol ‘cap areas,’ finances

A Monday meeting of the License Commission brought together various business interests to hear commissioners talk about proposed changes to rules and regulations. (Photo: Marc Levy)

Harvard Square and other parts of Cambridge could see a rapid end to decades-old policies capping how many restaurants can serve alcohol, as the city’s License Commission pursues a fast-moving, comprehensive review of its rules.

The changes wouldn’t result in a sudden explosion of restaurants serving alcohol, commissioners said. The effect would be far more significant for businesses who have had to negotiate the two categories of liquor pouring licenses available – “for value, transferable” licenses bought for sometimes hundreds of thousands of dollars that can be sold as a business shuts down, and the far less expensive “no value, nontransferable” licenses that disappear completely when a business closes.

It appears state law never allowed Cambridge to limit the value or transferability of liquor licenses, which would result in all licenses having some value. That essentially floods the market and lowers the value of the ones thought of as “for value, transferable” – what might have gone for $450,000 a decade ago is, by some business experts’ estimates, now worth around $10,000 to $20,000.

As recently as last month the commission told applicants that a cap policy was in place and restaurants within a cap zone would have to buy another restaurant’s existing “for value” alcohol-pouring license if they wanted one. On Wednesday, a restaurant manager in the final stages of buying one acknowledged being caught up in an expiring system with a questionable basis in law. “Obviously we’d like to not spend so much money to purchase one if we can,” said the manager, who feared that speaking openly on the issue would hurt his chances at regulators’ approval. “But Cambridge won’t issue anything. Basically I don’t have a choice.”

In the proposed rules, large sections – including the “cap” policy set in 1986 – are simply crossed out as the commission aims to update a document that hasn’t been looked at since 2008, bringing it into compliance with state law. In some cases, such as letting package stores open and sell alcohol on Sundays, it’s to catch up with changes in state law; in the case of the limits on restaurants with alcohol in Harvard and Central squares and some other areas, “the caps have not been observed,” according to the commission. “The commission has granted licenses beyond the cap … meant to be the exception, not the rule, but that has not been the practice. As such, there is no reason to continue having these ‘artificial caps.’”

“Cambridge is not subject to a quota,” the commission says.

Protests from restaurateurs, lawyers and city business associations may be softening the sharpest changes by the three-member commission, which got a new chairwoman in January in Nicole Murati Ferrer. At the first hearing of the proposed changes April 26, the commission proposed changes that would have had an immediate, devastating effect on the value of all licenses bought and sold between restaurants; at a Monday hearing, Murati Ferrer said she felt the best way to handle the change was that “once that business ends, the license ends – that’s it.”

The changes are still being mulled and subject to public comment, including at meetings to be held May 10 and May 24, and would go to the City Council for a vote before taking effect. The commission votes on them May 31.

That the commission is talking about these changes at all seemed to take the business community by surprise. There were a handful of people at the April 26 meeting, nearly all saying they were grasping to understand what was happening and why. Denise Jillson, executive director of the Harvard Square Business Association, said it concerned her that no other business association in the city was present – a result of poor public notice; one attendee complained he needed an attorney to explain what was proposed, as the provided document was filled with a jumble of strikethroughs and underlined added text with only a handful of formatting or reference notes off to the side.

When an attorney did sit before the commission to give his input, it was to wonder at the process and the minimal public notice that came before.

“There’s a policy change contained in here that is significant, and I don’t think there’s widespread understanding,” said attorney James Rafferty, a fixture before the commission for years while representing hundreds of clients in alcohol sales issues. “The last time the License Commission visited the question of the cap policy, it was a very different process. It was inclusive.” The previous process took a year and included the work of a task force with many business community members.

“If that policy is going to be significantly changed – and as near as I can tell, it’s being eliminated – it just seems to me the process would be better served if there were more outreach,” Rafferty said, referring to the cap policy. “I can’t find a narrative, I can’t find a policy rationale, set forth in writing or elsewhere via memo or anywhere else, that would allow me to understand the commission’s thinking.”

While Murati Ferrer presented the meeting as being to hear from the public what it thought of the proposed changes, Rafferty said it was “incumbent upon the commission to explain its thinking behind this significant policy change.”

The Monday meeting, by comparison, drew roughly 20 people, including representatives of the Central Square and East Cambridge business associations as well as the Chamber of Commerce. But it was held in an overheated room where the configuration of tables limited the number of seats. Latecomers stood for more than an hour and listened to the commissioners quietly discuss proposed changes in the order they appear in print, leaving the topics of quotas and caps toward the end. The audience seemed in misery, and several people left before the major issues were raised. There was no public comment taken.

Murati Ferrer was reluctant to talk about the changes outside the meeting as well, and gave only bland answers about the origins of the proposals. “The rules haven’t been changed since 2008. We’re just reviewing them,” she said.

A document explaining the proposed changes in plainer language was posted after Monday’s meeting.

The commission has also heard support for eliminating the caps. Attorney Kevin Crane, second only to Rafferty in terms of appearances before the commission, said that “from the start, it’s been bad policy” and that he had always believed “the CLC is fully capable of handling decisions on a case-by-case basis.”

Murati Ferrer has stressed that “the cap system doesn’t go away, even if the addendum is deleted,” as restaurateurs still have to show that their ability to serve alcoholic drinks is wanted by the public and serves a public need.