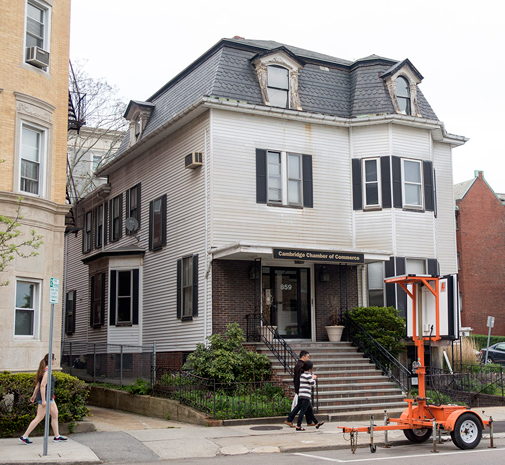 Location blocks from City Hall elicits $1.4 million as a start to process
By John Hawkinson

The Cambridge Chamber of Commerce moved out from its 859 Massachusetts Ave. offices in mid-May. (Photo: John Hawkinson)

The City Council approved a $1.4 million “friendly” eminent domain taking of 859 Massachusetts Ave. at Monday’s meeting. The building was home to the Cambridge Chamber of Commerce, which moved out in mid-May.

Eminent domain is usually thought of as a forceful taking of private property for the public good, and officials took time Monday to clarify that the Chamber is cooperating with the taking. “Many people in the public hear ‘eminent domain’ and think we have kicked the Chamber of Commerce out on the street,” councillor Jan Devereux said.

On the contrary, City Manager Richard C. Rossi told the council, reading from a handout.

The Chamber approached Rossi a number of months ago and “advised me that the Chamber intended to sell and wanted the city to be aware of it in case the city was interested, given its prime location,” he said.

The $1,363,875 price tag approved by the council is only the first of two payments. It is slightly more – 16 percent – than the current $1,173,200 assessed value of the property, according to the city’s assessors database, and represents the three-year average of assessed value plus 25 percent. The money will come from the city’s “free cash,” which was valued at $197 million a year ago, and which the city estimates to be at $150 million at the end of the current fiscal year, June 2016.

But the actual cost to acquire the property may be more, Rossi told the council. The city has obtained a confidential appraisal of its fair market value. In the event that the Chamber of Commerce believes it is owed fair market value, and possibly other moneys such as relocation expenses, Rossi said, the Chamber could threaten litigation that the city might then settle. The manager anticipates returning to the council “in the near future” to request an additional appropriation for such a settlement.

The property’s appeal is that it is in such close proximity to other municipal buildings: two blocks from City Hall and one block from the Michael Lombardi Municipal Building at 831 Massachusetts Ave.

For some time, councillors have expressed frustration at their limited meeting space for legislative functions and meetings with constituents, as well as the lack of office space for councillors aside from the mayor and vice-mayor. Seven council aides share a single office divided with cubicles.

But they have also urged the city to seek more space for affordable housing.

“Probably every member of the City Council at some time or another has come forward asking you to seek as many properties as feasible [that] you were pursuing anyway,” councillor Dennis Carlone said. “It should be applauded. Thank you for pursuing this so diligently.”

The taking comes after closed-door sessions Feb. 22 and May 23 in which the council and manager discussed the issue.

The intended use of the property is not yet clear; the order of taking specified it was “for municipal purposes, including but not limited to the creation of affordable housing and municipal office purposes,” although those uses may be in conflict.

The 859 Massachusetts Ave. property is part of a study the city is conducting for a renovation of municipal buildings, which was bid publicly and awarded to Cambridge-based HMFH Architects in early June. The study and its renovations are projected to run through 2020, according to the bid documents.