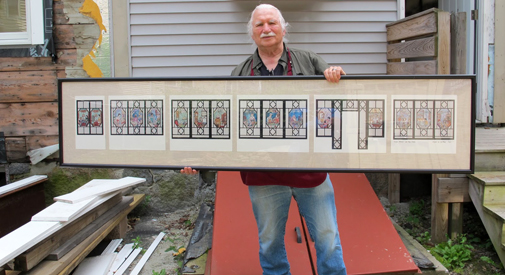 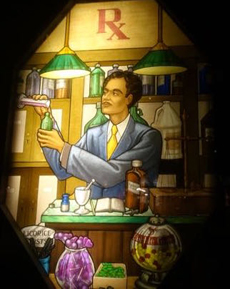 The stained glass windows at the Quest Diagnostics buildings in Central Square will be gone when the buildings are torn down to become the Mass+Main apartments (and ground-floor stores and other public amenities), and the developer is still figuring out what do with them, urban planner and former city councillor Sam Seidel says in a recent blog post.

“The Twining team is aware of the windows and have indicated that they will not be thrown out,” Seidel says – sure to be pleasing to Lyn Hovey, the artist who created them in the 1990s in his Concord Avenue studio. “Hovey was very clear that these windows are works of art and of value … he felt strongly they should not end up in a scrap heap somewhere.”

For people who pass by the long-closed biological testing labs and offices at 415-425 Massachusetts Ave. and wonder about the windows, Seidel runs through their history and explains their significance. His conversation with the artist results in good detail about the mission given Hovey by company founder Richard Fennell:

Fennell as patron put no restrictions on Hovey. The themes depicted in the glass would be Hovey’s to decide. So using his knowledge of the neighborhood that he had gathered from his years of living nearby, he set out to convey the variety of experience in Central Square, the local florist, the soda fountain. Hovey remembered the strong West Indian presence in the square at the time, and the stained glass also depicts the diversity of the multicultural community in Central. However, these are not actual places that existed. The come from Hovey’s imagination alone.