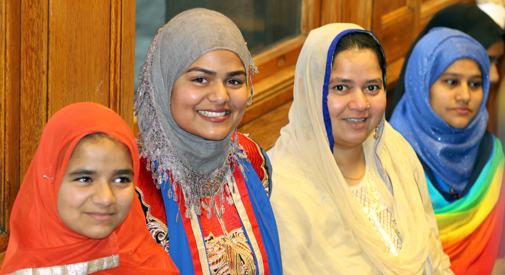 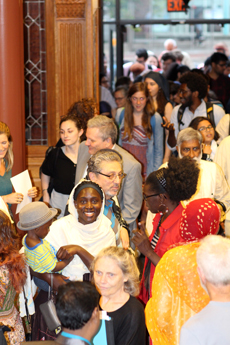 On a warm, slightly drizzly Tuesday last month, City Hall opened its doors and welcomed around 340 Muslims and non-Muslims to break their fast with organizer city councillor Nadeem Mazen, staff and volunteers. As a light rain started, the halls of the beautiful 127-year-old building soon filled with people. Children ducked through the crowds dodging colorful swirls of fabric, and every available inch was put to use in a scene and tradition becoming more and more a part of U.S. culture.

Mazen has worked for a year to align interests at City Hall directly with the diverse, welcoming community of Cambridge. During his speech – “I’ll keep it brief,” he assured the hungry crowd – he urged those present to return and take the opportunity to voice opinions at council meetings or volunteer for an advocacy group they supported. His words acted as a reminder that people can contribute civically in their communities every day, not just during election season.

The Immigrant Advocacy Group of Cambridge, an assembly of volunteers that operates with the help of Mazen and his staff, is one way residents can give back to their communities and encourage positive change. Founded in February to explore obtaining immigrant voting rights in municipal elections, the group has seen Cambridge enact the Commission on Immigrant Rights and Citizenship, due to start holding meetings in the fall. Members also work on other issues affecting the immigrant community, including trying to find ways to help foreign-born residents participate in council and School Committee elections and increasing access to Cambridge resources such as translation services, English as a Second Language classes and frequent multicultural events and celebrations. The group took a break from its regular meetings to mingle with the people filling Sullivan Chamber, where weekly council meetings are held, and to hear a speech by Ismail Fenni, imam of the Boston Islamic Society. By the time Fenni was finished speaking on the importance of Ramadan’s traditions as tools to practice and learn the virtues that make a complete person in the modern world, the rain had stopped, so prayers took place on the sloping front lawn.

Back inside, sundown’s approach shifted the crowd’s focus to two tables laden with food. Staff members handed out water and dates to people standing in line so they could break their fast exactly at sunset. 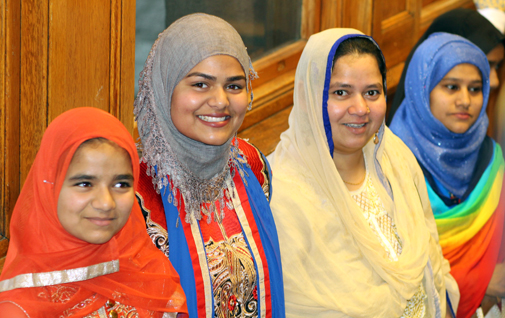 Participants at the June 28 event.

Ramadan is the perfect time to celebrate community. It is a holiday that teaches patience and tests the will, but also one that celebrates joining together to celebrate, feast and lean on each other. Everywhere at the June 28 event, people helped out those closest whether they knew them or not. Some attendees stepped out of line, delaying their own fast breaking, to help the staff serve food. The spread for the Ramadan meal called Iftar, put together by Boston’s Black Seed Café & Grill, included hummus, pita bread, rice pilaf, salad, chicken kebab and kanafeh, a layered cheese and dough pastry soaked in syrup.

Within 90 minutes everyone had been served, and a calm quiet persisted.

The event’s success could be measured by the empty serving dishes, but also by the vast diversity of those present. The crowd consisted of those who have lived in Cambridge for generations and those just beginning to build their lives in the city; students from every part of the world studying here, and those who will be studying elsewhere once summer ends. Mazen and the event’s volunteers hope the celebration can become tradition for the people of Cambridge, and that more members of the community will feel a reason to come to City Hall in Cambridge sometime soon.

Civic engagement can start with a spark, with one event you experience and become moved by. Hopefully more people in our local communities, Muslim and otherwise, see a reason to spend some time helping and working with others in the future.

To get involved with the Immigrant Advocacy Group of Cambridge, send email here.