Support is seen for business waste pickup by city, but 2012 studies found roadblocks 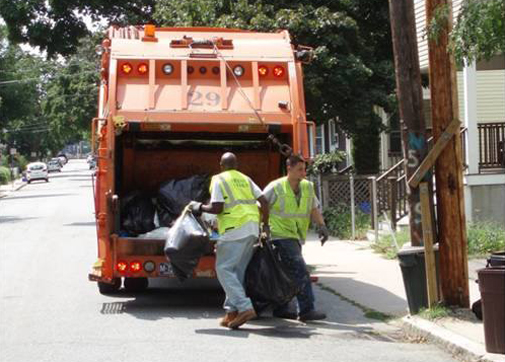 Support is seen for business waste pickup by city, but 2012 studies found roadblocks

City councillors are reviving calls to have city workers pick up trash and recycling from businesses, as they do from residences. (Photo: Department of Public Works)

Small businesses could see the city handling their trash and recycling pickup, a service already extended to residences, in a plan proposed Monday by city councillors. A similar proposal four years ago was knocked down by the city manager’s office as not being cost effective, but a tougher retail environment and more regulatory demands called for a new look, councillors said.

“These are small, local businesses that are paying the higher commercial tax rate to the city,” said councillor Tim Toomey, noting that in the past years the city had moved toward imposing a $15 minimum wage as well as rules on plastic bags and polystyrene containers. “We have to respect and assist those local businesses, because they just feel they’re being squeezed.”

While Toomey suggested that businesses could pay a small fee to the city for pickup, councillor Dennis Carlone wondered if mom-and-pop shop owners might be exempted from costs entirely, or at least pay on a progressive scale so the smallest businesses owners paid nothing. “We’d have to set the definition, but they shouldn’t pay anything if we’re trying to help truly small business – locally owned small shops,” Carlone said. “I’d be for letting their tax money pay for it.”

The move would benefit the environment as well, since forcing the city’s roughly 1,945 businesses to contract on their own for pickup brings noisy trucks trundling down residential streets at all hours, often from faraway communities. Toomey gave the example of a business that contracts its waste pickup with a company from Peabody, more than 20 miles to the north; even coming in at 2 a.m., that’s a 45-minute one-way drive.

“I’m excited to hear [the councillors are] tuned into it,” said Blackburn, whose constituents have told her that city pickup of trash and recycling would be “a lot more convenient, even if they had to pay a fee.”

The main issue “is that you have to find different companies. You try to be a good neighbor and a good citizen, and you have to have these separate trucks come down very narrow streets with lots of residences around,” she said.

The question will be how much has changed since September 2012, when reports from the Department of Public Works and City Manager’s Office found the impediments around picking up business waste too big to overcome. City workers already picked up 9,000 tons of recycling per year from residents and municipal buildings, and it was estimated that adding businesses would bump that up by 80 percent, adding more than $1 million in annual budget needs as well as a demand for two more trucks staffed by six new workers, and even more personnel to enforce recycling rules.

Expectations that recycling will help for itself through reclamation of aluminum and other goods are not reliable, either, according to the reports; with revenue per ton fluctuating from as low as negative $2.25 to as high as $27.13 within a year, there have been months the city has had to pay its recycling company rather than getting money back.

Still, Toomey said, he hoped for a new look at the issue, considering rising commercial rents and onrushing environmental change.

“I’m hoping the city manager will look at this in a new light,” Toomey said. “It’s time for something like this to happen.”