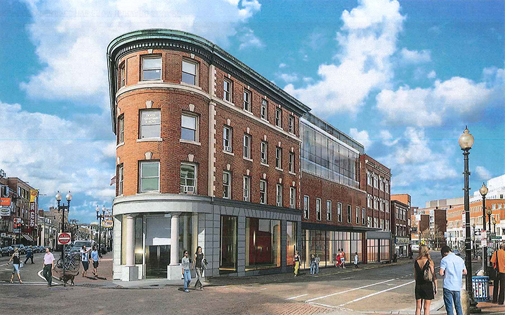 A rendering shows a proposed 5 JFK St. and connected buildings, as seen from the apex of JFK, left, and Brattle streets. (Image: Prellwitz Chilinski Associates)

Many people think of it as the Curious George Building. Or as Dewey, Cheetham & Howe, the “Car Talk” show production company with offices on the third floor.

The Abbot Building at 5 JFK St. is one of three connected buildings in Harvard Square where a proposed gut rehab could displace all of its retail and office tenants. And it’s not clear they’ll be able to afford to come back when it’s done, if they can find space to survive in the interim months.

Tenants at the landmark 5 JFK St. would be displaced in a plan to remake the block. (Animation: John Hawkinson)

The Historical Commission on Thursday will review plans to add two glassed-in stories to the space above Urban Outfitters at 9-11 JFK St., which is lower than the buildings on either side:  5 JFK and 18 Brattle St. The application seeks a certificate of historical appropriateness within the Harvard Square Conservation District, which is concerned primarily with encouraging “diversity in order to protect the distinctive characteristics of the district’s buildings and public spaces, and to enhance the livability and vitality of the district for its residents and all Cambridge residents, students, visitors and business people.”

The commission’s jurisdiction is over what is visible from the public way, and “does not extend to use,” said Charlie Sullivan, executive director of the commission.

The proposal from developer Equity One, which bought the building for $85 million in October, will gut the building for the renovation. In addition to Historical Commission approval, the proposal will require special permits from the Planning Board to accommodate height and parking, though it will likely be months before the project is ready for board review. No variances are expected, an attorney for the project said.

“We’re at least a year away from anything happening,” said John Cattonar, a vice president at Equity One. “The timeline itself is TBD, a lot because of the approval process.”

Although some have interpreted the lack of interior walls in the plans submitted to the Historical Commission as indicating one big tenant, “nothing indicates that,” Cattonar said. “What you’re seeing is what’s allowable in terms of zoning, with the maximum as-of-right area … to leave all options on the table.”

“We have a long view of it. We want to be active members of the Harvard Square community for a long time. Our first step is taking a look at the outside of the building,” he said. “Our view is we’re going to be stewards for the next hundred years. Hopefully we will do this one time and the right way.”

The current ground floor retail plan of the Abbott Building shows the Curious George shop space in purple, and also the proposed floor plan that replaces it with a large staircase and elevator. (Animation: John Hawkinson, based on images from Prellwitz Chilinski Associates).

Adam Hirsch owns the Curious George Store at the intersection of JFK and Brattle streets, the front door of Harvard Square. The plans show his store being replaced with an elevator and large staircase to the second floor.

“We understand that’s not going to be for at least year, but that’s not very long or far away in retail time,” said Hirsch, who’s been looking for a “Plan B” ever since the building sold. “You don’t have to be Wile E. Coyote to figure out if someone pays $85 million for a building, they’re going to do something with it.”

Hirsch estimated that relocation as a result of Equity One’s plans might cost him several hundred thousand dollars. “We’re trying to plan accordingly. [and] scrambling to figure out how to get that done,” he said. “We, of course, love our store. We love being where we are. We’ve loved being in Harvard Square. We feel we cater in a special way to the local market that comes and visits Harvard Square, and we just want to figure out how to stay in business. We’re a small mom and pop shop, we don’t have deep pockets. Doing another buildout is really really hard for us.”

Susan Miller-Havens, an artist with a studio on the third floor of 18 Brattle St., was critical of the developer’s plans. “It’s just big business coming in and blowing up the square. It’s going to be like the Chestnut Hill Shopping Mall,” she said. “It’s another indication of the end of the square as we’ve known it. They paid $85 million. They’ll displace all of us and have to raise the rent. So who is going to pay the rent? Not any of us!”

Denise Jillson, executive director of the Harvard Square Business Association, offered similar concerns from her office on the third floor of the building, overlooking Palmer Street: “As much as people like to say that Harvard Square is overrun with banks and chains, the reality is you have a pretty significant block right here, and the only chain is Urban Outfitters. Everybody else in this building is a small, locally owned independent,” she said.

“The reality is that in Harvard Square, over 70 percent of the businesses are still locally owned independents. Who can afford this? It’s certainly disconcerting,” Jillson said.

Hugh Russell, a 73-year-old architect who has served on the Planning Board for decades, has an office on the floor above Jillson’s. He says he’s puzzled by the project economics. “It’s going to cost them a considerable amount of money to completely gut rehab it and rebuild it,” he said, estimating $30 million for 60,000 square feet at $500 per square foot.

Retail, Russell said, could pay $200 to $300 per foot per year, “if they’re selling stuff that’s very expensive. There might be a few places [in the square] where the rents are approaching that. They’re probably very small,” he said. “That’s the biggest puzzle of this. What can they do to get those kinds of rents?”

The current proposal does not appear to contemplate a change of use of the upper floors from office to retail, as such a change would likely trigger the city’s extensive Article 19 project review space permit process. The project review process would give the Planning Board substantial say over the design of the building and the power to mandate significant conditions in exchange for allowing the development.

Russell said he thought the Historical Commission would likely view the 5 JFK St. building – the front corner of the triangle – as the most architecturally significant piece worthy of preservation, inside and outside. He suggested the brick façade of 18 Brattle St. atop such shops as Sweet cupcakes, Tealuxe and another Urban Outfitters entrance might not be worth saving, as preserving the façade during the rehab would be very challenging. “And for what? Arguably it’s the ugliest facade in Harvard Square.”

“I don’t have any particular big problem with them rebuilding this entire building,” Russell said. Referring to the glass-enclosed atrium, however, he said: “This is ugly and dreadful. One wonders what’s going to go behind it.” 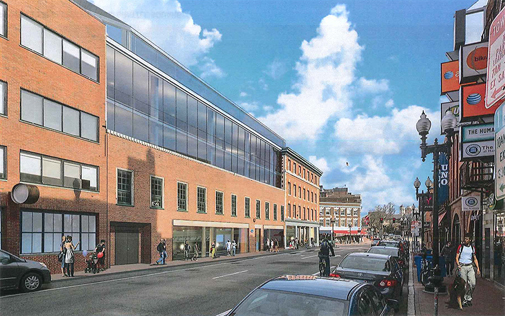 A rendering of a proposed glass atrium addition sits atop Urban Outfitters in this view from JFK Street. (Image: Prellwitz Chilinski Associates)

Tess Enright, who owns and operates Tess  & Carlos, a woman’s clothing boutique on the ground floor of 18 Brattle St., also had worries about the plan. “They’re outpricing everyone – no one can afford the rents,” she said. “I would like to stay in the square – I have to stay in the square. I’ve been here 21 years.”

“I just feel there definitely needs to be concessions made,” she said.

Enright suggested that Equity One might help to subsidize rent for small, owner-operated businesses, and also to work with other landlords to help their current tenants find space during the reconstruction. She heard rumors that rents would go up to $150 per square foot, consistent with Russell’s predictions. Enright said, though, that the proposed addition on top of the building did not bother her.

Jillson said that she had hosted a meeting for tenants of the three buildings with Equity One after the building was sold in October. But apparently many tenants didn’t find out. Enright didn’t know. Managers at Urban Outfitters and Tealuxe did not know. Nor did some others.

Psychiatrist Paul Cannistraro had an office in 5 JFK St. until last month, but just finished moving across the square to One Mifflin Place. “I didn’t even know this was all happening,” he said.

“I got real lucky. I couldn’t believe it. Literally a week after I moved out,” he said.