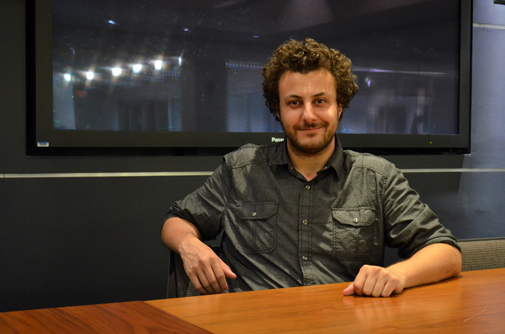 Drivers and bicyclists fighting a ticket for a moving violation are guaranteed to lose even if they win, thanks to a 2009 state law that instituted a $25 non-refundable fee to file an appeal – often as much as the ticket itself, or more. But the mayor of Cambridge and one fed-up resident are trying to make the system more fair.

In a policy order approved Monday by the City Council, Mayor E. Denise Simmons calls for the Legislature to undo a law that “seems designed to discourage people from contesting their tickets, and … appears to be punitive even to those who have broken no laws” and for the city to look at reimbursing residents who are punished by the law despite winning their case.

Update on Nov. 7, 2016: In a response to the City Council, the city’s acting city manager, Lisa Peterson, said the city had “no authority’ to reimburse filing fees imposed by the Registry of Motor Vehicles. But the council’s concerns had been forwarded to the city’s legislative delegation and state Legislature.

He posted an online petition Aug. 24 to “End the mandatory fee when drivers are found not responsible for a motor vehicle ticket,” and now has nearly two-thirds of the 200 signatures he wants to gather before sending it off to Gov. Charlie Baker and other state officials.

“Usually if I get upset about something, there’s already somebody else with more means, like a lawyer, doing something about it. But nothing has happened with this,” said Cohen shortly after collecting his 100th signature (and before learning of Simmons’ policy order). “I think the only solution is literally to change the law. I would like to see if I can fix something that seems so perfectly logical” – that is, that people who are found innocent shouldn’t lose money to show it, especially when they didn’t until seven years ago.

“It’s a moneymaker, and no one wants to take it out,” Cohen said.

The state generated $2.8 million in revenue from 112,835 hearings in the 2016 fiscal year, which ended June 30, said Erika Gully-Santiago, deputy public information officer at the state’s Supreme Judicial Court. The money goes into the state’s general fund.

As an indication of the effect of the fees, appeals against moving violations dropped by 10 percent in the year after the fee was implemented, The Boston Globe reported, quoting the clerk magistrate at Boston’s Municipal Court saying the money was vital to the court because “there’s really nothing left for us to cut” from its budget to keep operating.

The governor’s office declined to comment on the fee. It also had no comment when Cohen sought Baker’s support before launching his petition. 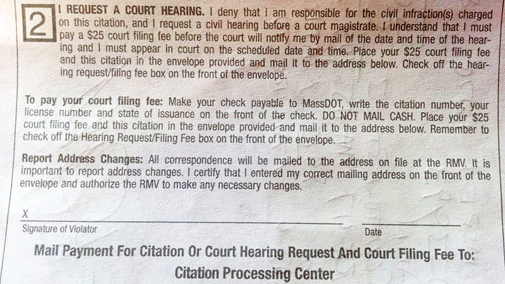 A ticket form calls for a $25 fee to be sent before a court date is assigned.

Cohen is a native of Dedham who created the app BlindTool, which helps the vision-impaired see by having a phone speak the names of objects as they are identified, and founded ShortScience.org, where academics can publish and read summaries of research papers for free – an answer of sorts to the kinds of issues with which Aaron Swartz wrestled before his prosecution and suicide. Cohen is a recent Ph.d. graduate in computer science at the University of Massachusetts at Boston.

“I got tickets when I was younger … tons of tickets that were dismissed. I appealed them all. That was pre-2009 when appealing tickets was free,” Cohen said. “I realized tickets are kind of this weird, nonsense thing where you get them kind of at random times and a lot of them were dismissed.”

But after a long run without being cited for a moving violation, Cohen was recently ticketed and planned to appeal again. “It was after this where it costs $25 to appeal it, non-refundable, and the cost of the ticket was $25,” Cohen said. “I took a day off of work anyway, went and appealed this ticket that cost $25 and they told me, ‘We already got your $25, so there’s no need to hold up this ticket.’ And I got really mad and I was like, ‘Well what about refunding this $25?’ And he was like, ‘It’s not going to happen.’”

Cases for and against

Being busy with work and finishing his degree, Cohen let the fight go and went back to work. But with his doctorate in hand, he suddenly had time to pursue his petition.

But Cohen has discovered some surprising opposition to his mission in conversations on Reddit, including the argument that the system represents a gentleman’s agreement: So long as the court gets to keep the fee, magistrates are happy to forgive a violation and not let insurance points accrue, adding to the cost of a driver’s insurance policy.

A Belmont man’s case against the fee failed in 2011. But on Monday, responding to the mayor’s call to correct the system, one resident noted during public comment that the Justice Department has said it’s wrong for government to rely on law enforcement fees for funding.

“We’ve seen this in Ferguson, Mo., and lots of other places,” Heather Hoffman said, “where people who are innocent still get tons of money taken out of their pockets.”