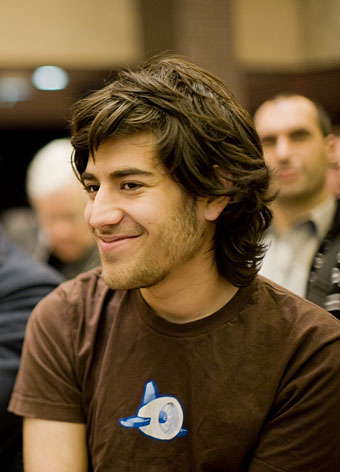 The suicide of Aaron Swartz after a federal prosecution on hacking charges continues to reverberate, with Sunday’s hijacking of two Massachusetts Institute of Technology sites for a memorial being just the start. The university is examining its role in the death, and a peaceful academic rebellion is continuing the work Swartz started.

Swartz, 26, considered a co-founder of the popular Reddit site, a “technology whiz kid” and recently a defendant on federal charges for downloading stories from an academic journal system for reposting, killed himself in a New York apartment. His body was discovered Friday.

The hacker collective Anonymous took down the institutes’ sites temporarily Sunday to replace them with a “call for this tragedy to be a basis for reform of computer crime laws, and the overzealous prosecutors who use them,” yet not blaming the institute for playing a role in Swartz hanging himself as pressure over the federal charges mounted. (Danah Boyd,  a visiting researcher at Harvard Law School and friend of Swartz’s, said the school “sheepishly” went along with a prosecution intent on making Swartz into “an example. And the reason they threw the book at him wasn’t to teach him a lesson, but to make a point to the entire Cambridge hacker community that they were p0wned. It was a threat that had nothing to do with justice and everything to do with a broader battle over systemic power.”)

“We tender apologies to the administrators at MIT for this temporary use of their websites. We understand that it is a time of soul-searching for all those within this great institution as much – perhaps for some involved even more so – than it is for the greater internet community. We do not consign blame or responsibility upon MIT for what has happened, but call for all those feel heavy-hearted in their proximity to this awful loss to acknowledge instead the responsibility they have – that we all have – to build and safeguard a future that would make Aaron proud,” the messages read in screen grabs and transcriptions posted by Gawker.

The institute’s president, L. Rafael Reif, later e-mailed a statement to members of the press, saying that while Swartz was not associated directly with MIT, he mourned “a gifted young man well known and admired by many in the MIT community” and praised his “creativity and idealism.”

Further, he called on Professor Hal Abelson to “lead a thorough analysis of MIT’s involvement from the time that we first perceived unusual activity on our network in fall 2010 up to the present. I have asked that this analysis describe the options MIT had and the decisions MIT made, in order to understand and to learn from the actions MIT took. I will share the report with the MIT community when I receive it,” Gawker reported.

Looking at the offense

A story Sunday in The Wall Street Journal describes Swartz’s downloading from JSTOR, the academic journal repository, as “a Robin Hood-like stunt” and talks in detail about prosecutors’ refusal to back down in the case, which could have resulted in Swartz getting 35 years in prison, to be followed by three years of supervised release, restitution, forfeiture and a fine of up to $1 million – harsh punishments for a case in which very little law was actually broken, according to a post by Alex Stamos, an expert witness for Swartz’s defense in a case set to go to trial in April.

“I know a criminal hack when I see it, and Aaron’s downloading of journal articles from an unlocked closet is not an offense worth 35 years in jail,” Stamos wrote, noting the openness of the university network Swartz used to download from JSTOR and the fact that the site allowed an unlimited number of downloads.

Stamos summed up the case as “an intelligent young man who found a loophole that would allow him to download a lot of documents quickly. This loophole was created intentionally by MIT and JSTOR, and was codified contractually in the piles of paperwork turned over during discovery.”

The Web is meanwhile teeming with reflections such as those by Brendan Greeley in Bloomberg Businessweek saying “Swartz wasn’t an anarchist. He came to believe that copyright law had been abused and was being used to close off what, by law, should be open. It’s hard to find fault with his logic, and there’s much to admire in a man who, rather than become a small god of the Valley, was willing to court punishment to prove a point.”

JSTOR seems to have agreed, at least in part. Three days before Swartz’s body was found the expensive, subscription-only academic journal site announced it would offer limited free access to its data – three items every two weeks. (Most of the work on the site was paid for with public funds, critics say, making its demands for payment for access to the papers questionable.)

One group of online activists have uploaded the mass of JSTOR documents to torrent site The Pirate Bay, according to Talking Points Memo, and another called the Archive Team, led by former Cantabrigian Jason Scott Sadofsky, has created an Aaron Swartz Memorial JSTOR Liberator that makes it easy for visitors to the site to download a public domain article without a subscription.

But perhaps the most enduring tribute to Swartz was the sudden, civil-rights style posting of academic papers to circumvent the restrictions put on their authors by their journals.

Proposed Saturday by neuroscientist Micah Allen on Reddit, the “guerrilla PDF uploading campaign in honor of [Swartz’s] fight for open access” took off quickly among people using the Twitter hashtag #pdftribute, and thousands of papers had reportedly been posted by Sunday afternoon. They are grouped at the hashtag scraper pdftribute.net.

“By standing together we show that the future of research publishing is freedom of information,” Allen wrote. “But tomorrow remember that we need to push through real copyright reform.”

On Monday, prosecutors formally dropped their charges against Swartz – routine after a defendant’s death, The Associated Press said.