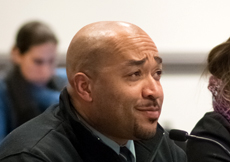 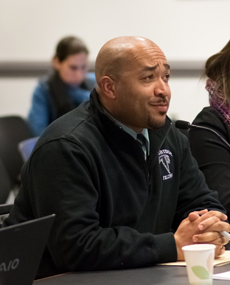 Damon Smith, principal of Cambridge Rindge and Latin School, has been part of a lengthy process of setting a districtwide student dress code. (Photo: Ceilidh Yurenka)

A district dress code policy was passed Tuesday by the School Committee, affirming language from a student-led process and without a controversial sentence added over the summer by an adult committee member. It brought to a close a motion introduced 14 months ago that appeared on five committee agendas, including the past three meetings.

Three Cambridge Rindge and Latin School students (including Charlotte Rosenblum, a senior who first raised concerns about the dress code and spearheaded the revision process), reiterated in public comment their desire to strike an order for all students to be “covered from mid-thigh to top of chest in non-see through material” because it resulted in “a more conservative dress code than we have had in a very long time” that sent a message contrary to the rest of the code, targeted almost exclusively female students and, critically, “makes a show of devaluing student activism” by fundamentally “undermining” their work at building consensus – a year of work with administration, staff and parents.

Immediately after the close of public comment, member Richard Harding moved to suspend the rules so high school principal Damon Smith could address the topic.

But member Manikka Bowman interjected, saying, “I was the person who brought this forward, and I want to be clear on the three reasons.” In addition to citing concerns by student committee members and a high school walkout on sexual harassment, she said, “I am a womanist. I am really passionate about the issues that impact girls,” she said, referring to language “we had lifted up” on bare midriffs, short shorts and sagging pants.

This may be the root of confusion: Bowman’s insertion of her sentence came at a June 7 meeting during discussion of the 61-page student Rights & Responsibilities Handbook, which includes the dress code – at the time, including the old language that the students had found so offensive and had been redrafting for nearly a year. Bowman’s motion replacing references to “midriffs, shorts shorts and saggy pants” with gender-neutral language by asking for coverage from “mid-thigh to top of chest.”

When the student-reworked code came to the Aug. 5 meeting, there was no reference to midriffs, short shorts or saggy pants – only Bowman’s sentence. But Bowman did not suggest striking the controversial addition.

“I read the write-up that came forth and I heard the students. I still have concern with that. Because if we are serious as a body about making sure we are equitable, I don’t want young women to bear the brunt of a dress code,” she said. “So I would move to put the language back the way it was, and then moving forward have a conversation about making sure that [we use] a gender-neutral tone.”

The last word was Smith’s:

“I have to be blunt and say that at the very start of the conversation [last fall], the students and I and the administration were very far apart. We have engaged in an process where we have tried to build consensus around the dress code … Over that time, I was significantly moved by their position and came to understand as they do some of the problems associated with the previous dress code and also, quite honestly, the problems with the new line inserted in the dress code [in the] summertime. At the end of the course of last year, I put together language that was written and shaped by the students and I agreed with. We wanted to pay particularly attention to making sure that folks from all backgrounds and statuses had protection, and eliminated some of the more problematic features … One of the most powerful things students talked about is the idea of being labeled a ‘distraction.’ … I just want our time to be more focused on teaching and learning and not focused on policing what people wear. I want to eliminate those conversations [between students and staff]. We are trying to become a school that has relationship at the core of what we do. I support the language that our students brought to you.”

Member Kathleen Kelly moved that the controversial sentence be struck. The revised language was passed unanimously, with Mayor E. Denise Simmons absent. The students, especially Rosenblum, also won plaudits from members Patty Nolan, Kelly and Fred Fantini for their strong “student voice” and what Fantini called “patience and perseverance” in seeing this through.