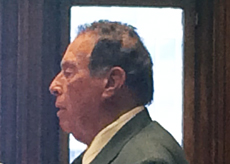 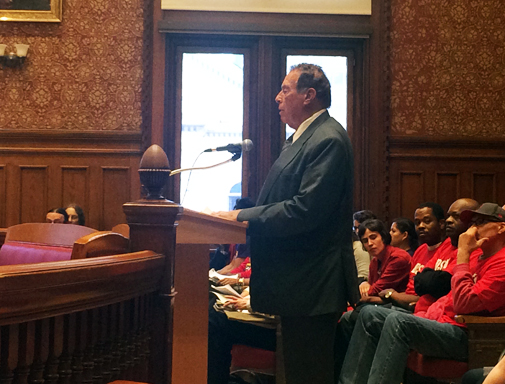 Despite hearing an apology, description of openness with development officials and report that a slow-moving legal case was due to be settled within three months, city councillors moved last week to seize the languishing Vail Court property near Central Square.

The 0.65-acre property at 139 Bishop Allen Drive, a block from Massachusetts Avenue and the heart of Central Square, will become affordable, senior or transitional housing, city officials have said. The council has freed up $3.7 million to give the owners in return for the eminent domain land taking – the fair-market value determined by an appraisal commissioned by the city.

The Abu-Zahra family and its Six-S Realty Trust had its own plans to transform the decaying parking lot and 24 apartment units, which have been boarded up for about a decade while family members squabbled over ownership and development rights.

“For a very long time, the case was not really pursued very aggressively or vigorously. It’s only been in the past several months, really, that there’s been a lot of activity on it,” attorney John Maciolek admitted while testifying for his client, Said Abu-Zahra, during public comment Sept. 26. He said Abu-Zahra had his own ideas about reviving the property for residential use that had been outlined to city planners in the spring, and that he would still “simply like an opportunity to conclude that litigation and try to redevelop the property on his own.”

The pace of development “may not be to everyone’s liking, but simply because it’s moving at a slow pace does not, to my way of thinking, provide a good reason for taking the property,” Maciolek told councillors. 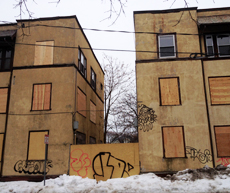 The boarded-up apartments of Vail Court have become a canvas for graffiti over the years. (Photo: Marc Levy)

Eminent domain proceedings are typically taken against blighted property, with the rationale that the land can be improved to better serve the public good. In his own public testimony, Abu-Zahra acknowledged that the city had a case – “With great apologies to the City of Cambridge management for the condition of the building that Vail Court is a blight on the neighborhood, it is also a blight on the owners of Vail Court” – but the ongoing poor condition of the property was because “our hands are tied” by the court case, which prevented anyone from applying for building permits until ownership was established. The units were boarded up and secured against entry in January, however, after a threat of fines and “further action” by the city’s Inspectional Services Department.

Seizing Vail Court has been discussed by the council for years, including a renewed push by Mayor E. Denise Simmons two years ago that led to the current action. Trustees were still “very surprised” to see the proposal arrive for a vote, Abu-Zahra said.

The votes enabling the land-taking – including freeing up the $3.7 million from the city’s “free cash” – passed 8-0-1, meaning eight councillors were in favor and none were opposed, though Nadeem Mazen opted to mark himself “present” instead of vote because his friendship with the Abu-Zahras could be seen as a conflict of interest. Over the past couple of years he has been an intermediary between the family and city when officials complained the Abu-Zahras were slow to respond to them, but his use of Vail Court parking for a campaign bus during that time raised eyebrows. “These are people I know and support and have grown up with, and for that reason I don’t think I’ll be able to render an impartial judgment,” Mazen said.

“That being said, I was all set to agree with the city had I thought they were misleading us in any way about being tied up in court. I was set to say, ‘Hey, it’s the right time to take this property – in fact, it probably was the right time a long time ago.’ But these are honest people who are trying to move through their issue and use their property appropriately,” Mazen said. “I’m surprised to see this come up close to the end of the year, when judgment [in court may be] rendered.”

At the time of the vote, Maciolek said Abu-Zahra could file a legal appeal and seek to block the land taking. As of Wednesday, that decision hadn’t been made, and Maciolek was unsure how quickly the city would act.