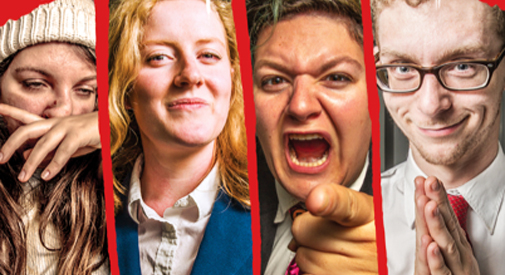 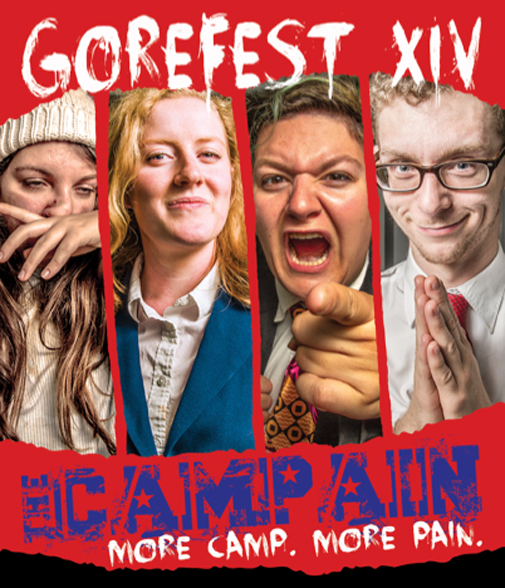 The combination of election season and Halloween season is best viewed – with a plastic smock to keep the blood off – at ImprovBoston, the Central Square comedy club. Its 14th annual GoreFest is turned over to the blood sport of politics, with the all-too-appropriate name “The Campain.”

In the club’s explanation of the show, which starts its run Oct. 27:

“GoreFest XIV: The Campain” brings more camp and more pain to an already excruciating presidential run. Now in its 14th year, the annual splatter musical [is] an election satire with original music, outlandish characters and a blood-soaked audience. While this election impacts everyone, “GoreFest XIV” is the only political show that will leave you covered in gore, laughing ’til it hurts and whistling a happy tune when it’s all over.

Each GoreFest is an original scripted and scored musical comedy that throws out enough fake blood that ponchos are recommended for audience members. Previous shows have included “Cirque du Slaughté,” “Macabr-et” and “Slaughterhouse on the Prairie,” and last year’s was a “GoreFest the Thirteenth” taking place at a summer camp.

“It’s an amazing, fun, ridiculous messy and gloriously absurd show to work on, and I know that it counts as a highlight in the career of many an ImprovBoston-ian,” said Josh Garneau, lead producer on the show.

There will be 13 performances of “GoreFest XIV: The Campain,” with book, lyrics and score by Nate Lopez, Bryan Smith, Dennis Hurley and Kara Gelormini, Steve Gilbane, Adam Brooks, Jeff Kimball and Mike Descoteaux. It is directed by Lopez. Tickets are $25 general admission. The performance schedule is here.

The club will also be running “Election! An Improvised Political Debate” in which improv comedians act as debaters, taking audience suggestion on a platform and using whatever tricks they can to win the audience vote. “It won’t be clean, it won’t be pretty, but it will be funny,” producers promise. The show takes place at 10 p.m. Fridays from Oct. 21 to Nov. 4. Tickets are $18 general admission.

Finally, Halloween stretches into next month with the 8 p.m. Nov. 2 show “Spooky Stories to Tell in the Blackout,” with comedians telling stories that are true, funny and a little scary, from near-death experiences to brushes with the supernatural. Scheduled storytellers include Kylie Alexander, Adam Finne, Kindra Lansburg, Tooky Kavanagh, Gary Petersen and Chris Player. Tickets are $10 general admission.