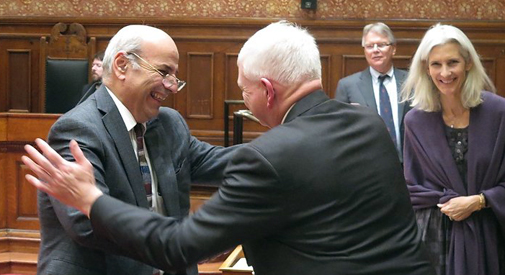 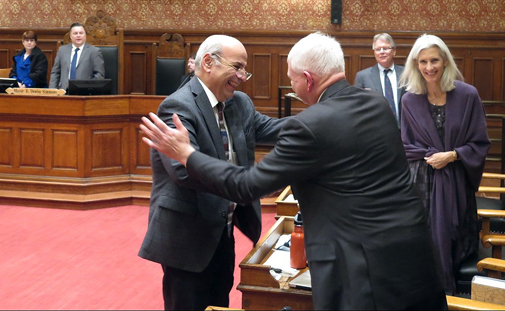 Cambridge officially has a new city manager in Louis A. DePasquale, with city councillors voting unanimously Monday to accept a four-year-plus contract that starts Nov. 14, when he takes the oath of office at 9:30 a.m at City Hall.

The contract ends Jan. 8, 2021, with starting pay of $292,500, set to increase 2.5 percent each year, totaling around $1.5 million over the entire four years and a month. Starting pay is down from a potential $330,000, which was what the just-retired Richard C. Rossi earned in the role after a similarly long tenure in city government. 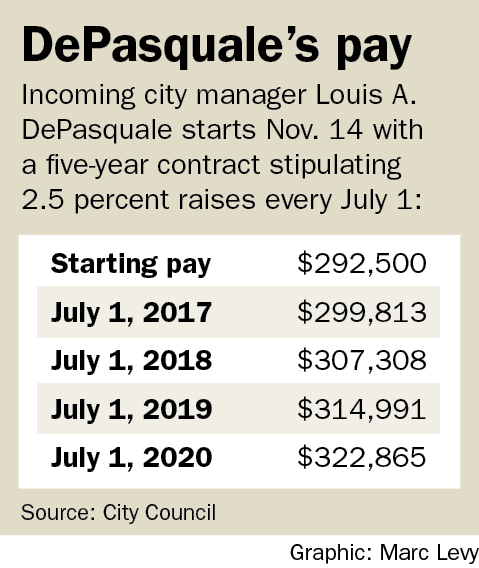 “In setting the salary,” the contract says, “the City Council recognizes Mr. DePasquale’s unique and invaluable experience and familiarity with the city’s operations and needs that Mr. DePasquale has acquired in his more than 40 years of employment with the city, including his 14 years of service as the assistant city manager for fiscal affairs and 20 years as budget director.”

But the contract is actually a savings for the city and something to be proud of in terms of aligning city manager benefits with those of other city workers, said councillor David Maher, who helped lead negotiations. “With the reduction of some retirement benefits and salary adjustments, this is about a 20 percent to 25 percent savings from the last city manager,” Maher said.

Being a savvier, more aggressive contract negotiator was called for by councillor Nadeem Mazen at the time of DePasquale’s appointment.

The longer term is also a shift from tradition, as three-year terms had been the norm in contracts for Healy, who retired in 2013, and for Rossi’s single term. It had also been standard for the superintendent of schools, but Kenneth Salim arrived this summer to fill that position with a four-year commitment.

If the city intends to continue DePasquale’s employment beyond 2021, it must signal so on or before Sept. 14, 2020, according to the contract.

It was hammered out in a series of closed-door sessions over the past few weeks between the council’s attorney, John Foskett of Deutsch, Williams, Brooks, DeRensis & Holland, and DePasquale’s attorney, Charles M. Campo from Clark, Hunt, Ahern & Emory.

It comes with use of a city car (with insurance, maintenance, repairs and gas paid by the city) and all sorts of electronic devices (“it is understood that some moderate personal use will be permitted”) and a $250,000 life insurance policy.

DePasquale’s also entitled to 25 working days of vacation per contract year, and can carry over up to five days of unused time from one contract year to the next or be compensated for up to 15 unused days each year – a deal that doesn’t affect accumulated vacation time from his past roles. If he retires or is fired, he can be compensated for all his accumulated unused vacation, personal, compensatory and administrative leave time.

There’s also an indemnification clause that the city will protect him from any legal ramifications of his work, which is also standard but went missing from Healy’s contracts for some five years due to what was called a “clerical error.”

DePasquale, 62, is a Cambridge native who rose in the ranks at City Hall over 41 years, serving most recently as the city’s assistant city manager for fiscal affairs since 2002. Before that, he was the city’s budget director, and has worked in other capacities in the city’s budget and treasury departments. He is a graduate of Boston State College and Northeastern University.

He is a popular and pleasant fixture in Cambridge who has long been credited by city managers for his hard work and contribution to the city’s long run of brilliant finances – including a 17-year streak of top ratings from each of the nation’s three major credit rating agencies. Cambridge is one of only about three dozen communities nationwide whose finances won this three-part stamp of approval in 2016.

The selection process put him up against two other candidates in early September: Paul J. Fetherston, an assistant city manager from Asheville, N.C., and Robert “Jay” Ash Jr., the state’s secretary for housing and economic development. But Ash withdrew his candidacy, leaving the council to choose between DePasquale and Fetherston, and on Sept. 29 they went unanimously with the hometown choice.