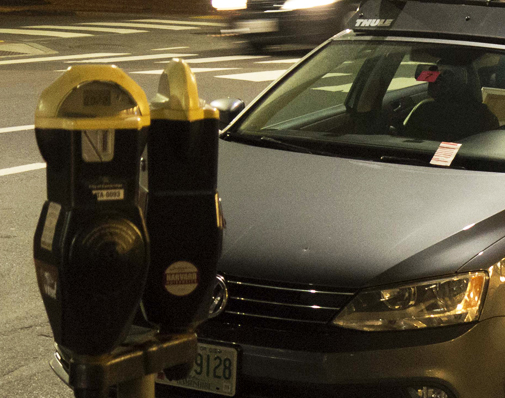 Changes will be citywide by summer, using same system as Boston
By John Hawkinson 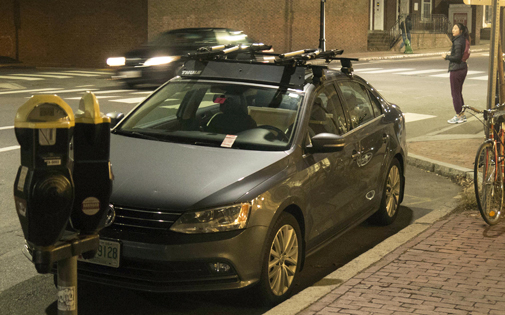 Changes are coming Monday to Harvard Square parking metering and ticketing rules, and to other parts of the city by summer. (Photo: John Hawkinson)

After years of delay and requests from the City Council, Cambridge will roll out parking payments via smartphone app in Harvard Square on Monday as a pilot program, and expects to expand citywide by summer 2017. Parking meters aren’t changing, and drivers can still pay with quarters; payments through the app will cost an extra 35 cents.

But with the rollout comes a change in the city’s “overtime” rule, in which a ticket is issued if a car stays in the same space beyond a meter’s maximum. 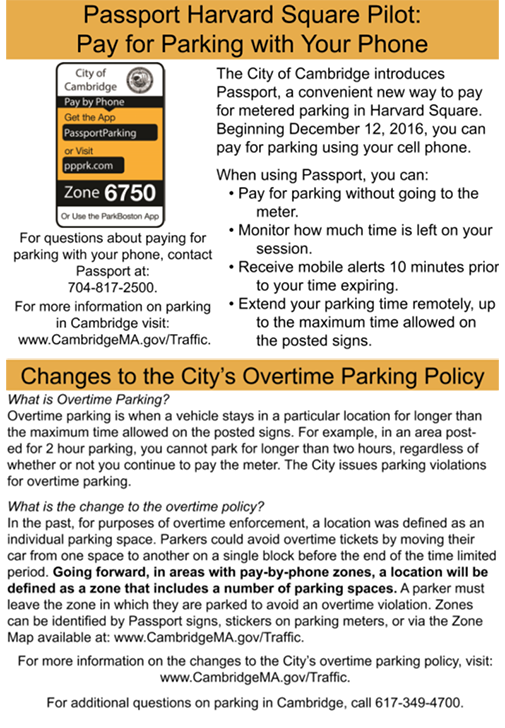 Some drivers “shuffle” spaces to avoid overtime tickets. Starting Monday, they will have to move between zones, not just between spaces, to avoid an overtime charge in the Harvard Square area.

Zones vary in size, but are around three blocks long. Any time there is change in the meter rules, such as from two-hour parking to 30-minute parking, there is a new zone.

New street signs are expected to go up this weekend, and postcards announcing the change were distributed on cars in Harvard Square starting Thursday.

“Because we do not want potential pay-by-phone users to be confused and attempt to pay with the application prior to the system going live, we have not been widely discussing or publicizing pay-by-phone prior to this launch,” Joseph Barr, director of Traffic, Parking & Transportation, wrote the City Council on Dec. 1.

If people are used to being able to “play the game” of shuffling spaces between co-workers every two hours, they won’t be able to do that anymore – or it will be more difficult, Barr said. The intent of the rule is to promote space turnover and ensure that meters are available for customers of local businesses and restaurants, he said.

“This is a change we’ve been wanting to make,” Barr said, acknowledging that the change would upset some people. “Although doing pay-by-phone didn’t absolutely force our hand, it’s a lot more straightforward to do pay-by-phone by zone rather than by individual meter.”

Most of the people who shuffle spaces, Barr said, are contractors and local employees. “And, we’ll see what happens when we go to Central Square,” he said, “but I think some people who work for the municipal government.”

Normally parking regulations changed need to published in advance, such as when meters were extended to 8 p.m. from 6 p.m., and the overtime rule is no different. The overtime rule says: “No person shall park a vehicle in any such parking meter space for a consecutive period of time longer than that limited period of time for which parking is lawfully permitted in the parking meter zone in which such meter is located.” 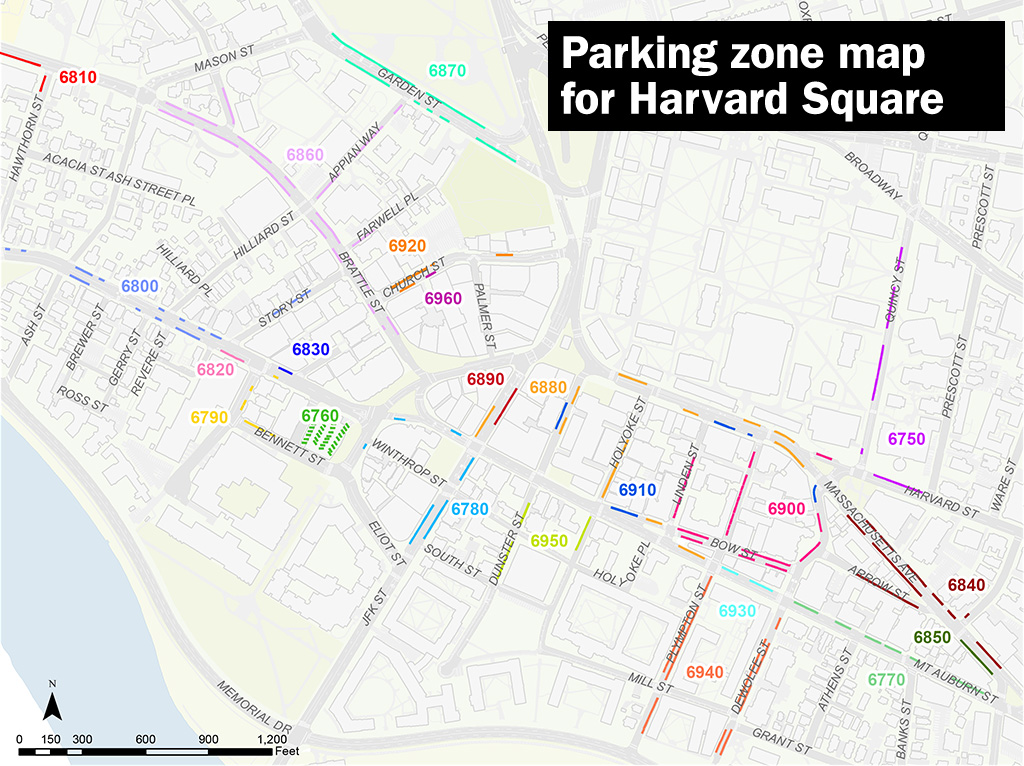 After exceeding their time limit in a spot, drivers will be required to switch to a new zone, indicated in different colors on the above map.

Despite the language referring to a “parking meter space,” Barr said his department “interpreted that as meaning that the limit applied for the entire zone … I think we’re within our legal rights to interpret the way we are.”

Tom Stohlman, who lives just west of Harvard Square outside the pilot boundary, said “They’re changing the interpretation of the regulation without public notice? That’s a bad mistake. It’s going to make a lot of people angry – it’s a recipe for disaster.”

Barr said he didn’t disagree that it “probably would be helpful to clarify the regulation just to be very clear about it, so it doesn’t come back to haunt us.” He said a change to the regulation should probably happen.

A few hours later, Barr decided to implement a grace period: “After our discussion about the initial deployment period, I tend to agree that it would make sense to do some period of warnings. So we are working on creating a separate postcard that enforcement officers can hand out for the first couple of days that explains the policy and tells people who would otherwise have received an overtime ticket.”

Drivers in Harvard Square on Thursday were surprised to hear about the changes. One said he threw away the postcard on his windshield without reading it, but usually he moves his car between Linden and Plympton streets in the evenings, one block away from each other. Under the new system, Linden and Plympton are in the same zone, so he’ll have to park several blocks further away.

“It’s gonna be real tough,” said an MBTA bus worker. But “the city is the city,” said another longtime employee in the square who shuffles his car, sounding resigned to the changes.

The council began pushing for pay-by-app with a policy order in 2014, and staff gave an initial report in January 2015. The current rollout came comes just a few weeks after the council asked for another update, on Nov. 21. Barr said much of the delay came from Xerox, which is responsible for the mobile ticket-writing computers used by enforcement officers and found the changes “extremely challenging.”

The city’s smartphone parking payment app is called Passport, the same system used by Boston. Drivers can download the PassportParking Mobile Pay app from the Apple App Store for iPhones or the Google Play Store for Android devices, or go to https://ppprk.com. (Boston has a custom app from the same vendor, “ParkBoston,” which should work as well.)

To use the app, drivers will enter a four-digit zone number posted at the parking space along with their license plate number, which the app can remember. It requires a credit card, and charges an extra 35 cent fee for each payment.

App users will be able to monitor how much time is left before moving their car, to receive alerts that their parking is about to expire.

In the rare case where a driver did not pay the maximum time at first and wants to extend within the meter’s time limit (two hours in much of Harvard Square, but four hours in the Eliot Street lot, and 30 minutes in some places), the app will allow that also. But not more than the posted time limit on the meter.

Users of the app will also be less likely to get overtime tickets – the app won’t allow you to pay twice in the same zone over the limit, Barr said.