As parents seek more junior kindergarten, four kids get to keep access given in mistake 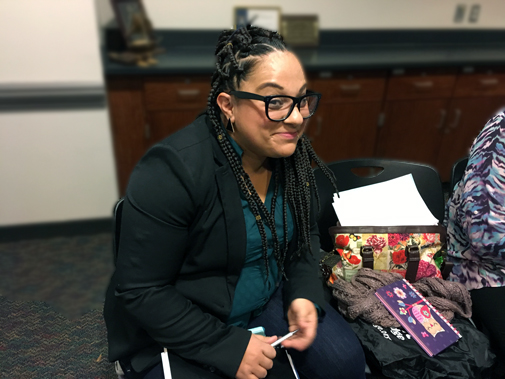 As parents seek more junior kindergarten, four kids get to keep access given in mistake

Tatiana Cruz, parent of a 4-year-old at the Fletcher Maynard Academy, reacts Dec. 6 to a School Committee vote to allow her child remaining in a junior kindergarten class. (Photos: Jean Cummings)

An unusual request by four families to not have their children sent back to preschool after 10 weeks of successful junior kindergarten classes has highlighted the district’s ongoing tensions over age-tested access to the program.

Shani Ellis and Tatiana Cruz, parents at the Fletcher Maynard Academy, spoke during public comment at a Dec. 6 meeting of the School Committee about the unusual circumstances they face: Each had a child in a preschool class there who was not old enough for junior kindergarten under district rules that a child must be 4 years old by March 31 to be eligible for junior kindergarten. But a few weeks into the school year, they were approached by Principal Robin Harris and teachers who suggested that their children and two others should move to junior kindergarten. Each child had already completed one year in the preschool and was deemed “ready to move up” in October.

The move went well. “It was a smooth and developmentally appropriate transition for them,” wrote four teachers in a statement, noting that the children “demonstrated maturity” in a “thoughtful, slow transition” led by staff. The children are now “thriving,” according to the teachers and families.

But on Nov. 22 the families were told that the four children would have to return to preschool – evidently because district administrators somehow learned of the arrangement and insisted the students could not continue in JK without committee action. On Dec. 6, members voted unanimously to allow a one-time exception and allow the children to stay in their new classroom.

The relief on Ellis’ and Cruz’s faces was palpable.

The principal, who was seated next to the parents but did not comment at the meeting, said afterward that – faced with an unusual situation of a large preschool class with a majority of young 3-year-olds (including some still not toilet trained), and a much smaller class of junior kindergarten right down the hall, led by a seasoned teacher and teaching assistant – she had made a mistake. “In hindsight, I should never have done this,” she said. “This is all on me, and I will never, never do it again.”

Asked whether the policy should be changed, she said that “this is not the right time.”

Committee members also have voted not to pursue a policy change, even while acknowledging the issue’s importance to many families in the district, despite two attempts in the past month by member Emily Dexter.

The vote for a one-time exception was the result of a motion by Kathleen Kelly. The issue was already on the agenda with a motion by Dexter that the Fletcher Maynard classroom should be considered a “pilot program” to see if younger 4-year-olds (that is, born after March 31) could be included successfully in junior kindergarten classes.

Committee members never got to Dexter’s motion because, for at least the fourth time this year, another member issued a last-minute motion to pre-empt a motion by Dexter.

And, as usual, it was member Patty Nolan who pointed out that “there is already a motion on the agenda addressing this issue,” and pleaded that the committee “should be working cooperatively” and not imposing dueling motions that say much the same thing.

“I just wanted a short motion,” Kelly said, “and I wanted to make it very clear to the families that we want to resolve this tonight.” With the suggestion of vice chairman Fred Fantini – seemingly aware of Kelly’s motion when he called on her after public comment – Dexter put her own motion “on file,” essentially removing it.

This issue harkened back to a Nov. 1 motion by Dexter to create a pilot program for expanding access to JK for children born between April 1 and Aug. 31. Alerting members that there are currently about 70 vacant junior kindergarten seats, she suggested a “very small pilot program” to allow in some 4-year-olds this spring semester. In the previous year, there were about 100 empty seats.

This motion, preceded by public comment from five parents asking for passage, had considerably more discussion and was voted down, with only Dexter voting in favor. Though members acknowledged that the long-standing policy on 4-year-olds was deeply flawed, they disagreed with the motion. Many members referred to the November 2015 Early Childhood Task Force Report as a more appropriate blueprint for resolving the issue, although it focuses almost exclusively on pre-junior kindergarten services.

“It is not in the best interest” of the schools to change an enrollment policy midyear, said Salim, without considering the “challenges of the ranges of academic and development needs of the children and the disruption of established routines and cultures in the classroom.”

This Salim quote about avoiding classroom interruptions was invoked by Cruz at the later meeting. “Given this position,” she wrote, “How could Dr. Salim and other school officials believe it is in the best interest of [my child and her three classmates] to uproot them from the JK classroom?” 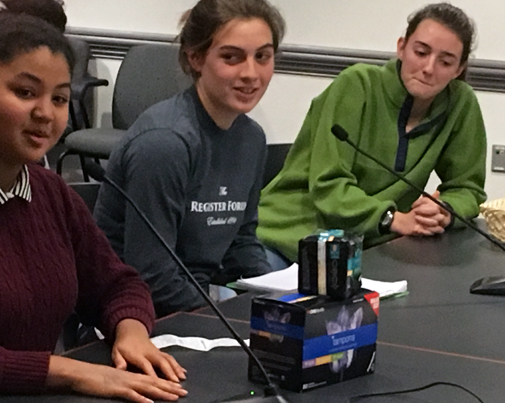 One change to Controlled Choice, the complex system that allocates children to schools, was passed – a recommendation to end the cap on kindergarten-age students assigned to each classroom during January’s lottery. The cap was imposed a few years ago to improve equity across income, using whether a student got free or reduced-cost lunches as a metric. In practice, Nolan and Maloney said, the change allows an odd and undesirable outcome: A family who has chosen a school as their first choice for kindergarten is kept out by the cap; a family making it a second choice for junior kindergarten gets in.

“It happened at least 25 times last year,” Maloney said. Families who are not allowed to be in the JK lottery because of their child’s birthday “already feel they have a strike against them,” making it a second blow to find out a JK student got in instead – and “impossible to explain,” in Nolan’s words.

Dexter was alone in voting against the motion, saying analysis and simulations by Maloney suggested the change would favor paid-lunch families – something Maloney denied.

Members voted unanimously to advance a pilot project for free female sanitary hygiene products at Cambridge Rindge and Latin School this academic year, with plans to roll out to other schools within the next two years. The plan was spearheaded by member Manikka Bowman and high school students Sophie Harrington and Pascal Beckert-McGirr.

A motion by Dexter asking comprehensive information on JK through third-grade class sizes was referred to subcommittee, with Nolan and Harding noting that much of it is typically provided during budget discussions.

In addition to the passing of draft guidelines and meeting schedules for creating a budget, members passed without comment a motion by Harding to ask the superintendent and athletic department staff to prepare information on sports, coaches and student athletes. Members also approved a motion to allow principals to recategorize $700,000 of current funds within their schools to better meet their needs. They also approved the receipt of $1,200 in miscellaneous revenues and donations, $62,000 in state funds to support early literacy intervention for at-risk first graders, $50,000 in federal funds for special-education teacher training, $2,666 in private donations to fund artwork in the memory of former student Josey Herrington and $10,000 from Nellie Mae to support “kindergarten quality enhancement through the provision of professional development in JK and K writing and storytelling/storyacting.”

Members approved contracts of $273,000 for CRLS replacement laptops, $30,000 for security hardware and firewall upgrade, $37,000 for vocational student transportation, $121,000 to East End House for out-of-school services and $50,000 for food services. (The name of the vendor on that contract – the Fantini Baking Co. – led Fantini to file a form saying he has no relationship with the company, and to leave the room for the vote.)