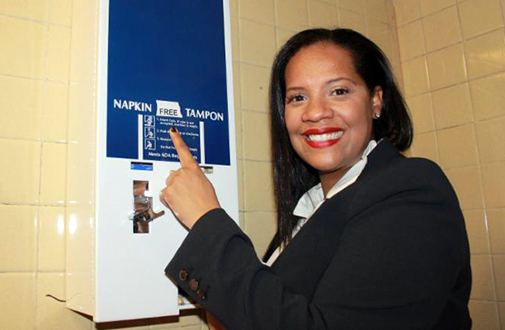 Hundreds of thousands of dollars? Expense looks at least halved
By Jean Cummings

The district is close to piloting ways to provide free sanitary products for girls in the city’s public schools, though not without bureaucratic hurdles.

Manikka Bowman, chairwoman of the School Committee’s Buildings and Grounds Subcommittee, raised the issue last spring after having read that New York City councilors voted to provide feminine hygiene products for all public schools, prisons and homeless shelters. She asked Jim Maloney, the schools’ chief operating officer, to put a price on the effort.

Coincidentally, CRLS junior Sophie Harrington was assigned this fall to develop a project she cared deeply about, and chose access to free sanitary products. It’s bothered her how much time it takes for a student who needs a tampon or pad to find one and get back to class, she said. Students must go to the school nurse or dean’s office to get supplies, then to a restroom.

“It takes a girl 15 minutes to do this, for something that should take three or four,” she said, and CRLS students have only a couple of minutes between classes. “The issue currently is where [these products] are. They are hidden away in backs of closets and drawers.”

She collected 520 signatures from high school students for a petition calling for easier access.

In an Oct. 5 subcommittee meeting, Maloney presented early estimates that providing products and waste liners for all school buildings would cost $278,703 annually and an additional $92,728 to provide dispensers in each girls’, ladies’ or unisex bathroom – estimates in part informed by assumptions gathered by city staff as they consider supplying all city bathrooms, he said.

At Tuesday’s subcommittee meeting, Maloney returned with a revised annual estimate: $145,728, almost half the original. He did not give a new cost for providing dispensers, but found “good news” that 29 existing dispensers at the high school would not need replacing.

This figure estimated the number of school buildings’ female staff members and students in the third grade or above and assumed the use of two products for four days per month for each person at 60 cents per product. (Maloney noted that the figures do not include “waste” or “loss” – students taking “more than they need.” He added that there should be an “education component” for students about use and abuse.)

“This can’t happen overnight” because of procurement issues and installation or adjustment of dispensing machines, he said, not to budgetary needs.

“I don’t know where this money would come from,” Maloney said. “We have no money in this year’s budget for this. [It all] comes from education money in the end.”

Harrington, along with a dozen other students, came to the most recent subcommittee meeting.

Junior Juliette Lowe Fleury argued that the real need is emergency provisions, and the projected eight products per person each month was off the mark. “Students generally don’t want to use school supplies,” Fleury said. “It’s only in an emergency situation that you don’t use your own” – the kind of emergency situation that drives you to ask the male secretary of your dean for a menstrual pad.

Patricia Harrington, one of two parents present in support, thought the cost per unit was way too high. Most drugstores sell at closer to 20 cents each, she said, and that is before a bulk discount. She also pointed out that the school is already supplying products, but they are tucked away out of reach.

Students also tried to disabuse the notion of “loss” or “waste.” “You don’t see people [alarmed about waste of] toilet paper or paper towels or face soap,” Sophie Harrington said, pointing to an equity issue. “You wouldn’t charge a boy for toilet paper. I don’t think it’s fair to ask a girl to pay for basic bodily functions.”

She also clearly thought the issue was getting more complicated than it needed to be. Brown University and other colleges have begun pilots to make products available, Harrington said, and frustrated students have “already set up baskets in two CRLS girls’ bathrooms with products, [which] has been working well.”

“If we can get a small group of students going into bathrooms and putting in 20 pads and tampons each day,” she suggested, “we can see what the usage is.” She offered to have students fundraise to provide the supplies.

“I appreciate that offer,” Maloney interjected, “but if we are going to do a pilot, it needs to mimic as close as possible what would happen in the end.” District dispensers are not programmed to offer the products for free and most bathrooms don’t have tables for the products, he said.

Subcommittee members urged a test at the high school, which would inform how best to roll out an upper school and elementary school program. “I don’t want to wait until next year,” said Nolan, though she wanted input from staff.

Bowman, though confirming that she wanted to move forward at the high school level quickly, was heading toward scheduling another subcommittee meeting in January to work more on “what a pilot program might look like.”

But Fantini wanted a motion at next week’s committee meeting toward a working meeting with students, staff and high school and upper school principals. “I’m hearing it’s not so much a cost issue as an accessibility and respect issue,” he said. “I think we should get some meetings and get it rolling.”

Bowman agreed to crafting the motion. “I’ll follow up with Sophie about creating a working group,” she said. “I’ll also work with Jim [Maloney] about the upper and elementary schools. I want the model to be done right. There are things we can do in the short term as well as think strategically for the long term.”