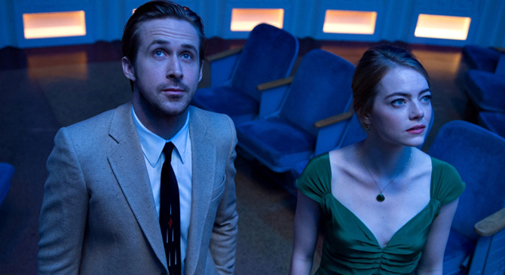 The last time I was bowled over by a musical was back in 2002, when “Chicago” cleaned up at the Academy Awards. Going back from there to the leg-shaking mastery of Fred Astaire in the 1930s and 1940s, there’s not a lot in between – “Grease” (1978), “Hair” (1979) and “The Umbrellas of Cherbourg” (1964) – to give a kick about. But now Damien Chazelle, the Harvard-educated directorial wunderkind who made banging a drum such a vicious game of egos in “Whiplash” (2014), the increasingly rare genre staple gets a slick revisionist redress that takes bold chances and wins on most counts. 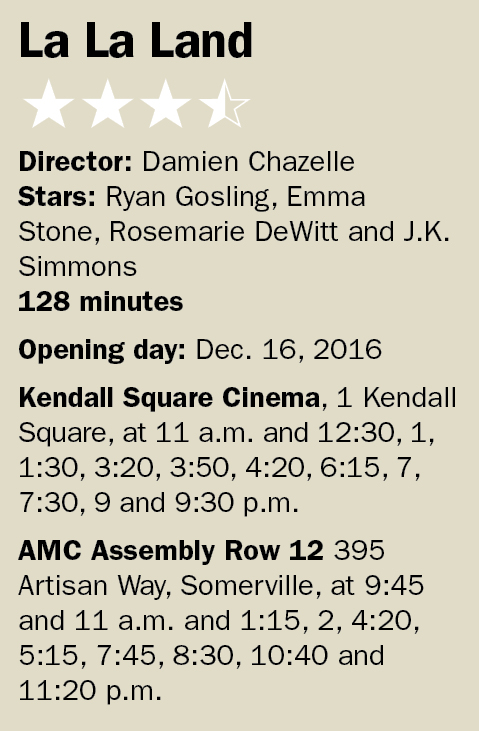 Not much can prepare you for what goes on in “La La Land.” The film begins with a somber traffic jam as the camera slowly pulls through the gully between inert cars. The feeling of gridlock dread is overpowering, akin to Jean-Luc Godard’s new wave classic, “Weekend” (1967), but as we settle in through the car window of one calm young woman in a sheer yellow dress, she begins to sing a wistful song in a soft, low key. Two minutes later the highway is abuzz in dance and a choral song (a kick-up-your-heels tune called “Another Day in the Sun”) in a long shot that’s more audacious than the opening of Robert Altman’s “The Player” (1992). Hard to believe, but true; there are so many performers and stunts going on that the difficulty of a song-length take must have been off the charts. Consider just the parkour guy gliding smoothly across the hoods of cars with a half-pike twist over a jersey barrier, flying in and out of frame so seamlessly you’ll wonder how exhausted he was at the end of the shoot – and how it would be humanly possible to maintain such a wide “oh happy day” smile. The retake quotient must have been high, and the result is astonishing.

“La La Land” is a romance, as so many Astaire and Ginger Rogers offerings were, but the love songs don’t start immediately. At the end of that traffic snarl, as the cars begin to move, there’s a mini road rage moment where Sebastian (Ryan Gosling), a jazz pianist full of righteous idealism and short on cash, leans on the horn to stir Mia (Emma Stone) from her acting hopeful daydream. The two bump into each other again – literally – at a jazz club where Sebastian’s newly fired for playing “real jazz” – by J.K. Simmons, in fact, Chazelle’s hard-assed heavy in “Whiplash.” Finally, at a party where he’s slumming it in an ’80s retro band, Mia puts in a request for A Flock of Seagulls’ “I Ran” and it’s love at third sight. They move in together and grapple with their youthful dreams. Mia quits her job as a barista on the Warner Brothers lot to write and produce a one-woman play, while Sebastian holds his nose and teams up with former bandmate Keith (John Legend) who’s added synth and pop vocals to make jazz more commercially viable. It’s a good gig, too; the group plays sold-out venues, but that means Sebastian’s always on the road. The stress and strain of that on their relationship is fairly predictable, but how Chazelle moves with it as he plays with time and bittersweet emotions, is anything but.

Sebastian and Mia’s intertwined journey of desire and hope is genuine and universal, and Chazelle’s slick eruptions into song, with two likable stars who sing and dance themselves, underscore that sentiment smoothly, even if never on a scale comparable to the opener.

The film’s overall romantic dreaminess is best encapsulated in a middle scene where the early dating pair go to see “A Rebel Without A Cause.” For reasons I’ll leave unsaid, they never get to the end of the movie. Instead they hop in a car and reenact the that film’s famous Griffith Observatory scene to a degree, then fall into an old Hollywood sound stage moment and float up to the stars. Chazelle himself shoots for the stars, and while he doesn’t always get there, there’s magic in every frame – scrumptiously shot by Linus Sandgren, who’s framed a slew of David O’Russell projects. If there’s one thing about “La La Land,” it’s deeply derivative yet wholly original, an odd mix that will keep audiences on their toes.