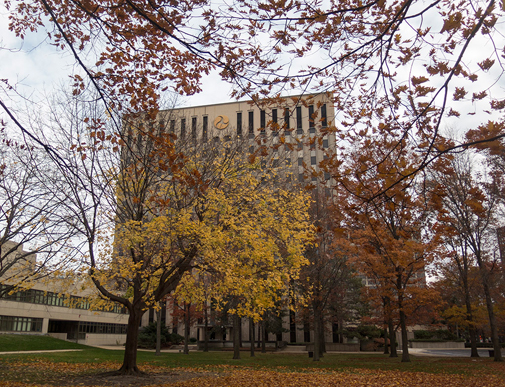 Deal comes just under the wire, in final days of Obama administration
By John Hawkinson

The Massachusetts Institute of Technology will pay $750 million for the 14-acre Volpe parcel in Kendall Square. (Photo: John Hawkinson)

The Massachusetts Institute of Technology will pay $750 million to gain the rights to redevelop the Volpe Center 14-acre land parcel in Kendall Square, MIT and the U.S. General Services Administration announced this morning. The parcel is the last major undeveloped area in Kendall, and the timing of the agreement reflects a concerted push to finish the deal in the last days of the Obama administration after a multi-year procurement process to select a bidder.

The institute’s first task is a new building for the Department of Transportation; the cost will be subtracted from the $750 million, and MIT will pay the difference to the government after completion. The building will be designed by Skidmore, Owings & Merrill, an 80-year-old international architectural firm that completed the new Los Angeles federal courthouse last year.

“It felt obvious to us that we should pursue this unique opportunity to work with the city and our Cambridge neighbors to help shape the future of the Kendall Square neighborhood,” Reif said in an email to the MIT community.

“It’s been a marathon project, but we have made it to the top of Heartbreak Hill,” said Robert Zarnetske, the General Services Administration’s New England head, in a statement. Zarnetske said that although there is a long way to go, for him “the finish line is in sight”: a new transportation research building, estimated to be complete in four to five years.

But for the institute, the process will be a lot longer as it works with the city in the years ahead on a final zoning package and development of the site. A similar process on Main Street took years to negotiate, broke ground last year and could take a decade to complete.

The institute will kick off that process with a pair of community meetings Feb. 9, one at noon and one at 6 p.m.

Its redevelopment of Volpe is an “investment,” said Israel Ruiz, MIT’s executive vice president and treasurer. The transaction will increase the institute’s investment property ownership in Cambridge to about 102 acres from 92 acres – all taxable because it’s used for commercial purposes; last year the institute paid $45 million in property taxes.

Steve Marsh, head of real estate for the MIT Investment Management Co., said that since there was no design for the new transportation building yet, there was no good estimate of how much of the $750 million would cover its cost. Marsh said an estimate provided to the government was “not a very helpful number.”

In late 2015, HR&A Advisors did a study for the Cambridge Redevelopment Authority that estimated the land value of the Volpe parcel at $283 million. But that number was “intentionally designed to be a conservative investment,” said Tom Evans, executive director of the authority.

“It was also designed to think about it from the perspective of a traditional development entity like a [real estate investment trust] that would be thinking as a horizontal developer with certain exit strategies and so forth. MIT is a different type of development entity, much more of a long-term hold and more patient capital than a lot of other developers. That’s probably part of the difference,” Evans said. “They just operate on a different time horizon.”

Marsh said that Skidmore, Owings & Merrill was selected from a shortlist that included Goody Clancy & Associates, as well as Elkus Manfredi, which has designed several buildings in the Kendall Square area.  Marsh said there were no design concepts or images available, but that the company was selected based on work it had done, including “quite a bit” for the government. The company also built seven buildings along Vassar Street on MIT’s campus from 1957 through 1972.

“They have not done work recently at MIT,” Marsh said. “This is a new opportunity to reintroduce ourselves to SOM.”

Iram Farooq, Cambridge’s head planner, said the company was “a very well-respected architect, and we look forward to working with them. If it transpires in an ideal way, for the city, it won’t be a completely separate element that the city is not engaged in at all.”

Evans said he had worked with the company in San Francisco: “They definitely know their stuff.”

The institute has created a 10-member committee to advise on plans and zoning for the site, led by former faculty chairman and  aeronautics and astronautics professor Steven R. Hall, according to Karen Gleason, MIT’s associate provost. Gleason said the committee would include herself, one undergraduate and one graduate student, representatives of all of five of the institute’s schools, and faculty experts from architecture and urban planning. A preliminary list of members includes architecture professors Hashim Sarkis and James Wescoat, and urban planning professor P. Christopher Zegras.

GSA declined to release additional details on the finances, asking reporters to file Freedom of Information Act requests for copies of the agreement.