Still no call on mayor attending inaugural, but office says her constituents split on idea 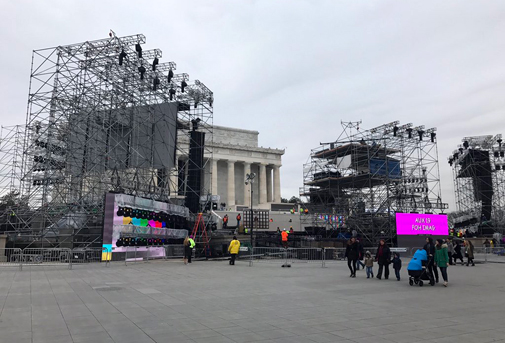 Still no call on mayor attending inaugural, but office says her constituents split on idea

Preparation is under way in Washington, D.C., for Friday’s inauguration for the presidency of Donald Trump.

Already in the nation’s Capitol for an annual U.S. Conference of Mayors gathering, Mayor E. Denise Simmons still has not decided whether she will attend Friday’s presidential inauguration of Donald Trump, mayoral chief of staff Neal Alpert said Wednesday.

Since it was reported Thursday that Simmons had been invited and was considering going, constituents have reached out “in equal measure” saying her reasons for attending are “fantastic” or saying her presence “would normalize this and we disagree.”

Simmons is an unlikely attendee for the inauguration of Trump as president, after a national campaign and transition that embraced, and was embraced by, white supremacists and anti-gay activists. She was the nation’s first black, openly lesbian mayor when first elected in 2008, and leads a notoriously progressive community that has opted to remain a sanctuary city for undocumented immigrants in defiance of a threat by Trump to strip such cities of federal funding.

The reason given at the time by Alpert was that her attendance “really depends what her workload is like when she gets into Washington” – a casual approach at odds with that of U.S. Rep. Katherine Clark, of Massachusetts’ 5th Congressional District, who is one of more than 50 Democratic politicians who have publicly opted out of going to the inauguration.

Clark said she reached her decision “after discussions with hundreds of my constituents” not to let her presence “normalize” Trump’s approach to governing. On Monday, as Clark spoke at a Martin Luther King Jr. Day event in Cambridge, an audience member yelled out “thanks for boycotting the inauguration,” followed by audience applause.

This week I am in Washington, D.C., for the annual U.S. Conference of Mayors. I was also invited to attend the presidential inauguration. As someone who strongly believes in the American ideals of freedom, equality, justice and the dignity of all the people in this great, diverse country, I am the furthest thing from a Donald Trump supporter. That said, there are legitimate reasons why I have contemplated attending this week’s inaugural: to protest, to bear witness to history and simply to stand tall and be a visible reminder to Mr. Trump and his supporters that people like me – and the people I represent – aren’t going into hiding for the next four years. We will not be cowed into submission, we will not be silent and we will not be invisible. We will be right there, proudly and vociferously standing up to any attempts to tear down so much of what makes this country great. Whether or not I attend, and it is unclear whether my schedule will permit it, I want my position to be crystal clear: Those of us who have fought to expand civil rights and liberties, who have fought for women’s rights and LGBTQ rights and for access to affordable health coverage, and who have viewed the Obama presidency as a momentous era in our nation’s history, are not going anywhere. We will be working our hearts out these next four years, and the people of Cambridge will be leading the charge.