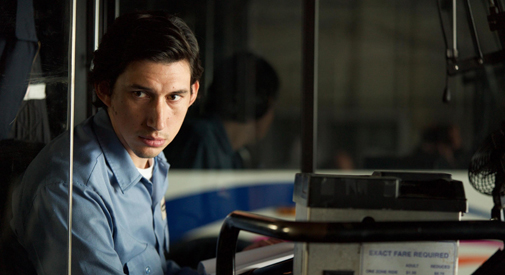 There’s a quirky poetic flow to “Paterson” as in nearly every Jim Jarmusch film, seeping outward in languorous yet artful movements, and while “Paterson” is tightly coddled, it’s also one of the director’s more earthy and accessible efforts – something akin to the universality of a Frost poem, possessing the ability to sate on many levels while appealing to a diverse audience. And poetry is the operative word, as the film revolves around an aspiring poet by the name of Paterson (Adam Driver, finally in this film and “Silence” able to step out to the fore) who by day guides a boxy bus around the city of (you guessed it) Paterson, N.J. 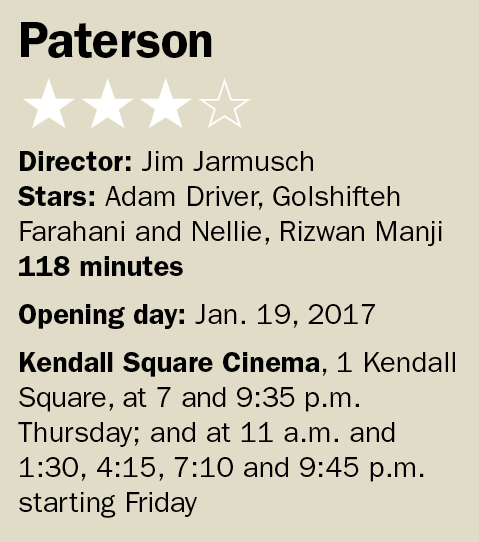 The beauty of Driver’s performance is the quiet, soulful humanity imbued in the character. Paterson doesn’t drive his bus with contempt for the menial job or harbor any grand delusions of his higher mission as an artist – he’s not that arrogant douche! Quite the opposite. Poetry, we learn early on, is a passion that fills a hole in Paterson’s life, but he writes and observes quietly; Jarmusch, as the penning poet sits in his bus at the station waiting for the signal to hit the roads, superimposes the scrawlings onscreen with Driver in his purposeful drawl doing the narrative voiceovers. The poems are works by the poet Ron Padgett; the recurring “Love Poem” has a great talky line about matches: “Currently our favorite brand is the Ohio Blue Tip.” (If you’ve ever read Nicholson Baker, this will call to mind the mundane yet plumbing ditherings of “A Box of Matches.”)

Not much really happens in “Paterson,” though there is a slight, surreal crescendo toward the end, but what drives the film beyond Driver’s solid anchoring is Jarmusch’s idiosyncratic eye and the potpourri of personality that inhabits Paterson (the city). That’s especially so at Paterson’s home, where his partner and muse Laura (Golshifteh Farahani, channeling the playfully alluring foreign ingenue that Maria de Medeiros brought so vivaciously to life as Butch’s girlfriend Fabienne in “Pulp Fiction”) undertakes a different art project each day, mostly turning whatever it is she touches (curtains, cupcakes or a random wall in the small ranch home) into a black-and-white tiled mosaic, and the racially integrated bar where a pantheon of Paterson’s famous are hung as photos above the till. There’s an early mention of Rubin “Hurricane” Carter and the Bob Dylan ballad that rings a bit off-tone, but the recursive reference to doctor and poet William Carlos Williams – who practiced medicine near Paterson during the first half of the last century and wrote an anthology titled for and about the town (containing several letters of fellow New Jersey poet Allen Ginsberg) – as Paterson’s idol and inspiration is a smartly baked layer of lyric genius that subtly yields background about the man and the town of the same name.

Besides Farahani’s whimsical free spirit, the film’s big scene-stealer is a jowly bulldog named Marvin (actually a female dog named Nellie, who was sadly put down recently) who doesn’t quite like sharing Laura or a home with Paterson and, as a result, adds an ongoing alpha male struggle that plays out in devilishly surprising strokes. Also, down at the watering hole hangs Everett (William Jackson Harper), a jealous jilted ex-boyfriend who, while something of an Urkel-lite nerd replete with Clark Kent glasses, also possesses a wildly mercurial emotional temperament that bears a varying degree of tension each time he sidles up to Paterson at the bar top.

The cinematography by Frederic Elmes, who started out doing “Eraserhead” with David Lynch and has partnered with Jarmusch on several projects, captures the town in somber, reflective ways that mirror Paterson’s words and Williams’ observations. The film as a whole never flags in tenor, pace or mood. It’s the same focused, yet free-styled approach that has borne delight and revelation in Jarmusch’s works from the kooky-cousin dark comedy, “Stranger Than Paradise” (1984) to the bitingly blasé vampire chronicle, “Only Lovers Left Alive” (2013). Personally I’ve always been partial to “Mystery Train” (1989) and “Broken Flowers” (2005), while the pop of “Dead Man” (1995) has always eluded me, no matter how riveted I am by its gorgeous composition. Beyond arty quirk, which Jarmusch seemingly has a patent on, the defining stamp on any of the indie auteur’s endeavors has always been their immeasurable depth of intimacy and fullness of character. They’re immersive experiences that engross from the inside out. “Paterson” is an exemplar in that regard, plumbing the passion for meter and the banality of the everyday while tapping into the rhythm and flow of the human condition.