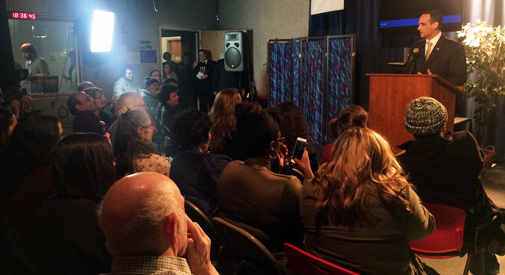 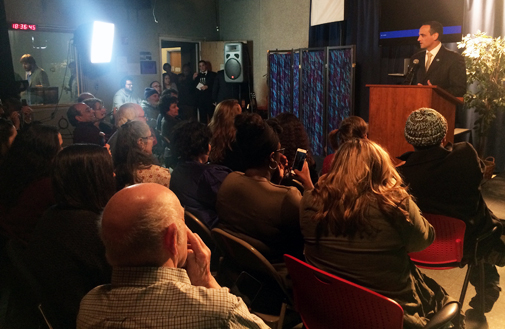 It wasn’t just awards handed out Thursday at the “ASCATdemy Awards.” There was news as well: Somerville Community Access Television is rebranding to be the Somerville Media Center, reflecting the fact that not just television is made in its Union Square headquarters.

Though cable access television has been the mission since SCATV’s founding in 1983, online content and Boston Free Radio – also served up via the Web, but consumed primarily as audio – has become too big too ignore in the mission, said center leaders such as executive director Brian Zipp and Joe Lynch, a board member representative and ubiquitous face of the station.

The name change was announced Thursday from the awards stage, before the formal handing out of the “Prospies” by Lynch and Ken McIntyre, whose anarchic “Heavy Leather Topless Dance Party” show has distant origins on a Cambridge channel.

Update on March 28, 2017: A video explaining the change has been posted:

Cambridge Community Television is in a similar situation, and a change of name could happen there as well to reflect the new, broader mix of media made there, said Susan Fleischmann, executive director.

“The name Cambridge Community Television has been recognized and respected for the past 29 years – however, it does not reflect the full breadth and scope of the opportunities we offer the community,” Fleischmann said Tuesday. “The board of directors of CCTV is engaged in a strategic planning process to determine our path for the next period of time, and it is possible that a name change will be one result of that process.”