Mayor decided on ‘better use for her time’ than Trump inaugural, stayed for march

Mayor decided on ‘better use for her time’ than Trump inaugural, stayed for march 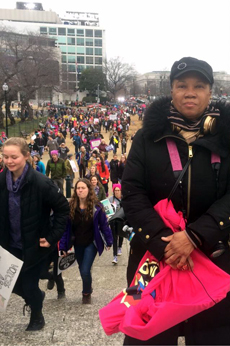 She didn’t go after all.

Mayor E. Denise Simmons, who spent more than a week on the fence about attending Donald Trump’s presidential inauguration ceremony in Washington, D.C., on Jan. 20, said Tuesday that she attended a National League of Cities open house event instead.

“She thought it would be a better use of her time,” mayoral chief of staff Neal Alpert said Tuesday, speaking for Simmons.

The National League of Cities confirmed it held an open house that day as an alternative to the inaugural. The tone at the meeting, where municipal officials discussed issues they might face under President Trump, was “somber but defiant,” Alpert said.

Trump, who made it into office by virtue of Electoral College votes but fell short of Democrat Hillary Clinton by nearly 2.9 million in the popular vote, has long seized on the size of crowds he could attract to rallies as a sign of his popularity and legislative mandate. But his inaugural drew about one-third the crowd of Barack Obama’s inaugural in 2009, according to experts.

The Women’s Marches that followed Jan. 21 in reaction to Trump’s election are now being called potentially the biggest day of demonstrations in U.S. history, having drawn an estimated 4.2 million people nationwide.

Simmons took part in the Washington, D.C., march, she said on Facebook. “I saw so much positivity in D.C. today, and I will absolutely be taking that back to Cambridge with me,” she wrote.

Her statement included the information she did not attend the inaugural but had been “nevertheless inspired by our leaders like Hillary Clinton and Elizabeth Warren, who showed up as the loyal opposition for the peaceful transfer of power,” as well as by members of Massachusetts’ Congressional delegation who decided not to attend. Despite the presence of the Facebook statement, neither the mayor nor any member of her staff – she has five full-time and one part-time staffers, Alpert said Tuesday – were able to answer questions about the inaugural or point to the Facebook statement while Alpert was out of the office. A query sent by email Monday night and followed up every successive day went unanswered until Alpert was asked again this week.

Before the inauguration, Alpert had said Jan. 12 that her attendance “really depends what her workload is like when she gets into Washington,” when she would be in Washington, D.C., for the annual United States Conference of Mayors on Jan. 17-19. Five days later, she said via social media that while the “furthest thing from a Donald Trump supporter … there are legitimate reasons why I have contemplated attending this week’s inaugural: to protest, to bear witness to history and simply to stand tall and be a visible reminder to Mr. Trump and his supporters that people like me – and the people I represent – aren’t going into hiding for the next four years. We will not be cowed into submission, we will not be silent and we will not be invisible.”

Alpert said her constituents had been split roughly evenly on whether she should attend the inaugural. Afterward, one thanked Simmons on Facebook for her “transparency as you publicly struggled with the decision.”

“In the coming months and years, having leaders who will truly wrestle with issues instead of always having an easy answer will be ever more important,” said Becki Norris, an educator at a Cambridge charter school.