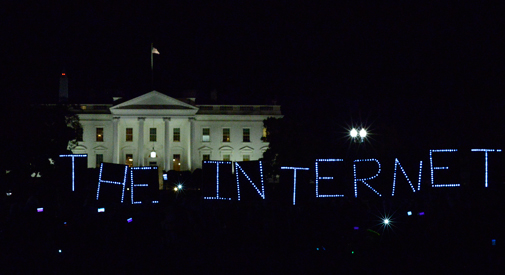 Activists hold a vigil at the White House in 2014, when the Obama administration wound up upholding net neutrality policies that are at risk again. (Photo: Stephen Melkisethian)

Net neutrality. Net neutrality is the principle that Internet service providers must treat all network traffic equally. Telecommunications companies oppose this because they see revenue opportunities in selling “fast lanes” and a chance to favor their own services. Pai agrees, and believes, without foundation, net neutrality to be one of the many needless pieces of regulation that is impeding innovation.

Corporate consolidation. The Obama administration failed an early test, allowing the merger of Comcast and NBC/Universal, but did negotiate concessions regarding digital inclusion and network neutrality. Early indications were that more substantive objections were going to be raised to a pending merger of AT&T and TimeWarner. While candidate Trump denounced this merger as a symptom of a broken, rigged system, as president he has now said that he has not “seen any of the facts” regarding the merger. The prospect of a Republican administration opposing mergers seems dim, at best.

These Obama policy initiatives were not the work of radical media activists. They were, instead, the considered proposals of a self-described rabid capitalist – Wheeler, who had spent his career in and representing the telecommunications industry, but came to believe industry was suffering a market failure. He felt that, to restore balance and competition, the government needed, as a last resort, to exercise its regulatory powers.

Make no mistake. In the world of telecommunications policy, the Republicans’ agenda is as extreme as their immigration, women’s health and environment policies. They see removing regulatory power from the FCC entirely as achievable, allowing unbridled corporate power over the technologies vital to our daily lives and to our democracy.

While telecommunication policy is thought of as national, in reality, it’s a matter of whose cables and services reach every home. That decision is a very local one. A free, fair, open and affordable Internet for Cambridge is within grasp. All Cambridge needs to do is build one.

By building its own network, Cambridge can ensure that its infrastructure reflects its values and the needs of its residents, not the values and needs of Comcast and Verizon.

A municipal broadband network can  – and should – be neutral, treating all data traffic equally. By building its own network, Cambridge can control the economics. Cambridge could leverage its wealth and provide broadband regardless of an individual’s ability to pay. By being a network provider, Cambridge would contribute to a diversity of providers and bulwark against corporate concentration. Lastly, Cambridge doesn’t need the revenue that would come from selling personal data and can provide the strongest possible privacy protections.

We should remember, and take seriously, what candidate Trump said about freedom of speech and the Internet:

Just as Cambridge has pledged to remain a sanctuary city to protect its residents and its values, Cambridge can take steps to protect free speech and a free and open Internet. It can build its own broadband network. This is what resistance looks like.

The author is a member of, but not speaking for, the Cambridge Broadband Task Force. A version of this essay appeared on his Medium page.