Schools, city offices will close for snowfall of up to 12 inches expected for Thursday 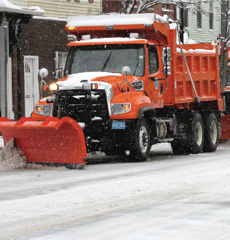 Schools, city offices will close for snowfall of up to 12 inches expected for Thursday

A city truck plows during a previous snowstorm. Plows will be out Thursday dealing with expected snowfall of up to 12 inches, city officials say. (Photo: Department of Public Works)

With up to a foot of snow predicted for Thursday, the city has called a snow emergency – closing services and putting a parking ban into effect as of 7 a.m. to facilitate plowing.

At 8:10 p.m., it was announced public schools would be closed, and the city’s Snow Center website flipped its municipal offices and libraries into the “closed” categories as well.

Thursday’s storm is the biggest so far this season, with the National Weather Service saying it was likely Cambridge would be seeing 8 to 12 inches of snow – and potentially as much as 13. The service said to expect at least 5 inches. It is all but certain to push this year’s snowfall past the total for the winter of 2015-16.

The parking ban means vehicles left on streets with “No Parking during a Snow Emergency” signs will be ticketed and towed until the ban is lifted. Residents losing street parking get a free alternative at some garage facilities (cars would be accepted beginning at 8 p.m. Wednesday). A list and map of prohibited streets off-street parking options is on Snow Center.