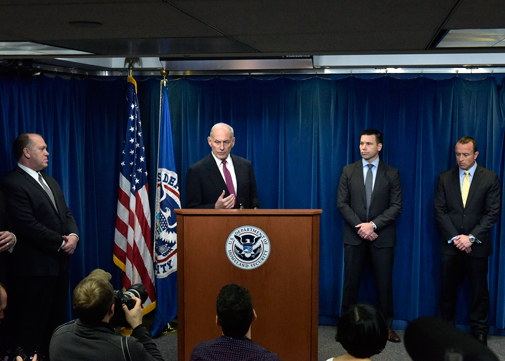 As Trump vows to step up deportation of undocumented immigrants, the Cambridge Housing Authority is required to report the citizenship status of all members of households that get federal housing aid to the U.S. Department of Housing and Urban Development, executive director Michael Johnston told CHA commissioners at a meeting Feb. 8. That means the federal government already has the names and addresses of the small number of undocumented immigrants who live in public housing here or get rent assistance from the local agency, he said.

Current federal rules allow undocumented immigrants to live in federally subsidized housing as long as at least one member of the household is a citizen or has papers to be here legally, such as a green card. As of now, 49 of the 6,780 households in Cambridge public housing or using rent certificates are “mixed,” with both citizens or legal residents, and undocumented immigrants, Johnston said. Those “mixed” families generally are penalized by paying an extra 10 percent rent.

Johnston also discussed a draft executive order, which has not been signed by Trump, that targets for deportation immigrants who get federal aid within five years of arriving in the United States, even if they have proper papers. The draft was leaked to several news organizations last month. Almost 10 percent of the adults, children and seniors in CHA public housing or voucher programs – 1,210 out of 12,837 – hold green cards, Johnston said. The authority doesn’t know when they emigrated.

The draft covered any benefit that is based on income, assets or need. But that definition “may not include public housing and vouchers,” Johnston said. And CHA counsel Susan Cohen cautioned that the order, if it is ever issued, might be different from the draft, and might be challenged in court.

Immigration experts quoted in news reports said the prohibition against immigrants becoming a “public charge” within five years of arriving has been the law for years, but was rarely enforced.

Asked for details about whether the draft executive order might include housing assistance, Cohen said the draft order referred to two federal laws designed to keep immigrants from depending on public dollars after they enter the country. One, the Immigration and Nationality Act, passed in 1952, explicitly included housing assistance in the definition of public benefits. But the regulation carrying it out excluded housing aid.

The draft executive order would begin the process of defining what makes an immigrant a “public charge,” and could end up including housing aid, Cohen said.

CHA commissioners Victoria Bergland, who represents tenants on the board, and Naomie Stephen expressed concern and outrage at the draft order and at the president’s threat to bar federal funds for “sanctuary cities” that don’t cooperate with immigration officers seeking to hold immigrants who are arrested.

“It’s ridiculous,” Stephen said. She suggested that the board take a position opposing Trump on sanctuary cities; no other commissioners joined her.

Cohen said the agency would “not necessarily be covered” by the sanctuary city policy because the authority is not part of Cambridge city government. “If it happens we would have to see how that plays out,” she said.

Messages and phone calls seeking comment were sent to the Alliance of Cambridge Tenants, Cambridge and Somerville Legal Services and Emmanuel “Manny” Lusardi, an aide to vice-mayor Marc McGovern who deals with issues affecting immigrants. Lusardi said McGovern’s office “is looking into how CHA and the City Council can protect any and all immigrants, including undocumented immigrant residents of public housing. Policies need to be addressed and possibly enacted at the City Council level to protect an already anxious, vulnerable, but innocent community.”

Cambridge’s agency is converting the last of its state developments, Jefferson Park State, to the federal program and rebuilding the dilapidated project. Only federally funded public housing can participate in the Rental Assistance Demonstration program, which is enabling CHA to repair and modernize all its deteriorating public housing.