A mayoral email account goes on unread for a year, affecting pretty much no one (update) 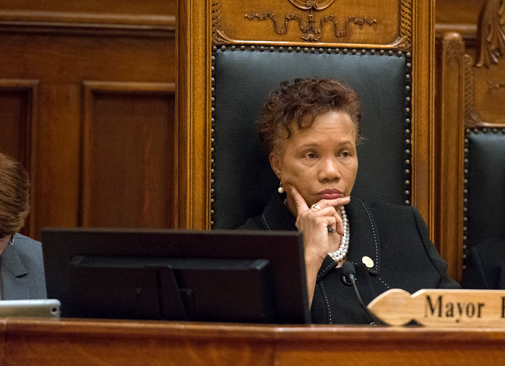 A mayoral email account goes on unread for a year, affecting pretty much no one (update)

Even when Mayor E. Denise looks at her computer, she doesn’t see email to [email protected] (Photo: Ceilidh Yurenka)

Since Mayor E. Denise Simmons took office last year, 768 megabytes of email in 6,162 items was sent to [email protected], but nobody was reading it. It just collected unread.

When Simmons took office, the email address was removed from the mayor’s Web page, although it remained in countless city publications and in the address books of citizens and other correspondents.

The mayor’s personal email, [email protected], was being read, as was email sent to the City Council as a group, which includes the mayor, according to Neal Alpert, chief of staff to Simmons.

The “vast majority” of emails sent to the [email protected] address were also copied to Simmons’ personal email or to the City Council, and so were “seen and responded to in a timely and appropriate manner,” Alpert said, after reviewing the last year of unread emails.

Of the remainder, they were mostly junk mail, Alpert said.

There were “maybe five” emails sent by this reporter, a “handful” from the MBTA and another “handful” from “different organizations” inviting the mayor to events, Alpert said.

City councillor and former mayor David Maher said that the emails continued to go to him, and he noticed it in early 2016 and brought it “to someone’s attention,” but nothing changed. Maher noted that many of the emails were copied to the council, so it did not seem odd that he was receiving them, and “at a certain point I quite honestly figured that I was just receiving duplicates of the email and never gave it a second thought.”

Chief Information Officer Mary Hart said that as of last week, email to the [email protected] address no longer goes to Maher, and now goes to Simmons. Alpert said he planned on reminding the Information Technology department at the end of the year so the same problem does not occur for whomever is mayor in 2018.

This reporter became aware of the problem when the mayor’s office did not respond to a routine public records request within the allotted time, and did not respond to a follow-up inquiry; an appeal was filed. Massachusetts Supervisor of Records Rebecca Murray wrote Feb. 13 that Cambridge informed her that the address was “out of service”; though at the time it continued to forward to Maher.

Mail sent to the [email protected] address goes to the mayor; the eight other city councillors; assistants to the council Mary Horgan and Sandra Albano; and some but not all of the councillors’ aides.

This post was updated Feb. 24, 2017, to correct a statement that Mayor E. Denise Simmons decided not to use the [email protected] email address and had it removed from the mayor’s Web page. Chief of Staff Neal Alpert clarifies that, instead, the Mayor’s Office was not aware using it was an option, and its removal was not intentional on the mayor’s part.