From the City of Cambridge, March 23, 2017: The city is sponsoring a free household hazardous waste collection day from 9 a.m. to 1 p.m Oct. 17 in the Field Street Parking Lot at Danehy Park, 99 Sherman St., in the Avon Hill neighborhood just east of Fresh Pond. This event is for Cambridge residents, and proof of residency is required to drop off materials.

Due to work in the area, Birch Street will be switched to a one-way street in the opposite direction (from Concord Avenue toward Field Street) from 7:30 a.m. to 1 p.m. that day to facilitate residents accessing the Field Street Lot for the drop off event. 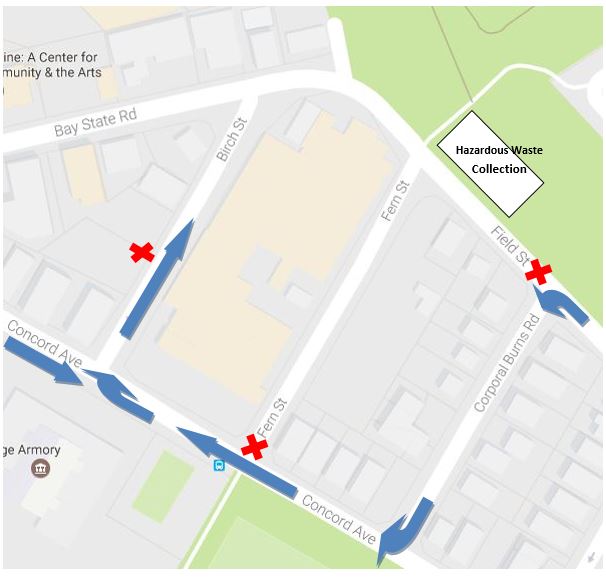 Accepted items include: batteries (vehicle and non-alkaline); car fluids including antifreeze, brake, engine degreaser and transmission; car tires (a maximum of four per household); chemicals including cleaners, glues, removers and those used for photography and in swimming pools; fluorescent light bulbs; mercury items including thermometers and thermostats; paints, both oil-based and latex; poisons such as insecticides, pesticides and weed killers; prescription medicines (which are also accepted year-round by Cambridge police); propane cylinders (20 pounds or less only); and waste fuels including antifreeze, gasoline, kerosene, Sterno and motor oil. (Motor oil is also accepted year-round at the city’s Department of Public Works.)

Items that will not be accepted include: alkaline batteries; ammunition, fireworks and explosives (which should go to the city’s Fire Department); asbestos; bleach or ammonia; commercial and industrial waste; construction debris; empty aerosol cans; fire extinguishers; compressed gas cylinders; infectious or biological waste; radioactive waste; smoke detectors; and syringes (which should go to the city’s Health Department).

Proper disposal of household chemicals helps protect public health and the environment. For information, call the Public Works Department at (617) 349-4800 or click here.