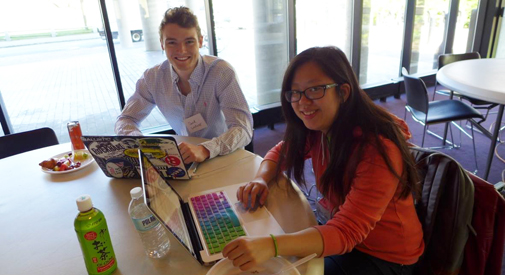 Members of a International Space Apps Challenge Boston team work together in 2016 in Kendall Square.

Back in the 1960s, President John F. Kennedy wanted NASA to be built in Kendall Square, but plans changed when Lyndon Johnson took office. This weekend, Kendall Square gets another taste of what that responsibility might have felt like at the fourth annual International Space Apps Challenge Boston.

The mass, collaborative hackathon focused on space exploration – led by the National Aeronautics and Space Administration – takes place over 48 hours in cities around the world. Last year’s event drew more than 12,500 participants from 162 locations globally, including 13 Boston teams made up of 40 participants. This year, the number of locations has jumped to 200.

Eight of those were so-called “mix teams” that combined Cambridge-area residents with participants in Tokyo, many of them from Tokyo University. It’s a unique aspect of the Kendall Square hackathon location, according to Binnovative, an organizer of the event.

There are five challenge categories this year that will lead to the creation of software, hardware, data visualization and citizen science solutions from NASA data by coders, scientists, designers, storytellers, makers, builders, technologists and others who just happen to love space and the Earth. The categories include:

Ideate and Create, to design new ways to experience Earth Science data and technologies (Example: Create crew-friendly designs for a habitat and multi-use furniture for isolation studies on Earth researching the environmental and human dimensions of life on another planet.)

Our Ecological Neighborhood, to study ecological systems and generate solutions to understand life on Earth better. (Example: Develop a tool to trace invasive species in your neighborhood over time.)

Warning! Danger Ahead, to help monitor natural disasters and phenomena associated with health risks and assess their effects on life and property. (Example: Map severe weather conditions with the presence of local atmospheric aerosols to identify potential connections.)

The Earth and Us, to combine NASA data with sociological and economic information and generate new perspectives on human-environment interactions. (Example: Map the life cycle of a favorite food, then create its most environmentally sustainable version.)

The hackathon takes place starting at 9 a.m. Saturday and ending at 4 p.m. Sunday at the Cambridge Innovation Center, 1 Broadway, Kendall Square. The event is free – and caffeine is provided. Information is here.