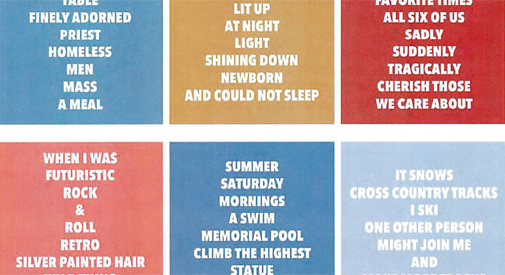 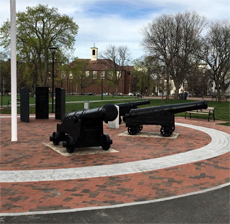 A panorama of Cambridge Common since a $6 million renovation was posted April 17 by Quinton Zondervan. Click to view in Facebook.

May flowers aren’t the only thing coming up in Cambridge Common this spring – public art is too. Approval at Monday’s City Council meeting to hang banners was among the final details to pin down for an installation coming in mid-May.

The application, which had already received approval from the Cambridge Historical Commission and the city’s Electrical Department, passed with no discussion.

The project, “We Were Here – Memories of the Cambridge Common,” was conceptualized by a local artist, Kelly Sherman.

The installation consists of 17 banners that will hang from lampposts along the Common’s paths. The square, primary-colored flags feature a spare design with white, capitalized texts. The short, poetic writings are distilled from interviews Sherman conducted over the past year with people who had memories of the Common.

“When I was futuristic rock & roll retro silver-painted hair wild thing teenager,” reads one memory of time on the Common. “Summer Saturday mornings, a swim, Memorial Pool, climb the highest statue, eat lunch,” is another. 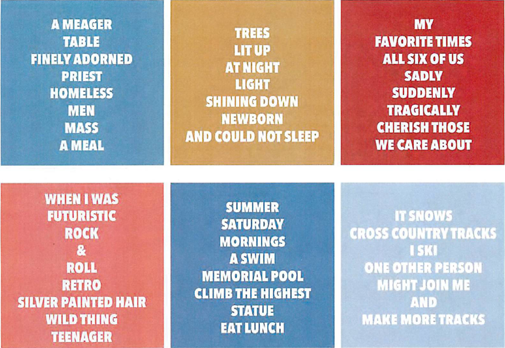 Some of Kelly Sherman’s “We Were Here” to go up in Cambridge Common from mid-May through September.

Out of context, the banners might be confusing. But “We Were Here” is part of a larger public art initiative titled “Common Exchange,” designed to showcase the park’s recently completed renovations and to “celebrate the notion of connectivity and pathway making,” according to Dina Deitsch, curator of the project and a member of the Public Art Commission. Deitsch spoke in support of the application during the public comment portion of Monday’s meeting.

The opening event for Common Exchange will be from 3 to 6 p.m. May 13, and installations and performances will continue through Sept. 30. Common Exchange will feature the work of 10 artists. Other projects include Carmen Papalia’s “Blind Field Shuttle,” in which the artist leads vision-less walking tours of the park, “exploring access and trust in public space”; and Paul Ramirez Jonas’ “Publicar,” which replaces the Common’s impermeable monuments with cork message boards embedded in two boulders, where passers-by can leave messages and “invert the hierarchy of the traditional monument.” Allison Smith will lead “Common Goods” Colonial-era crafting workshops that explore issues of historic import “and the capacity of objects to effect and reflect change.” 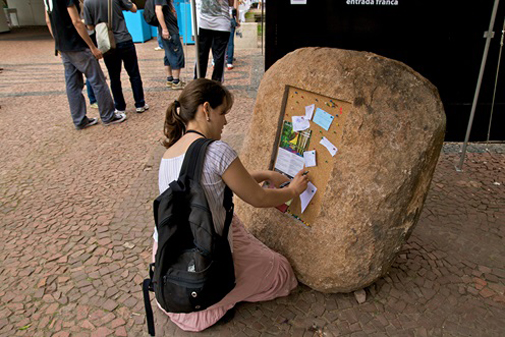 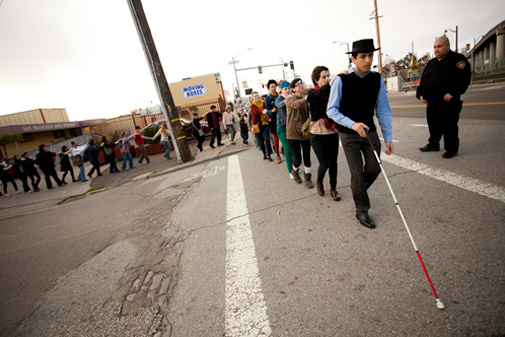 Cambridge Common underwent renovations from June 2014 to June 2016. The $6 million renovation project redid all of the pathways in the space, rehabilitated features of the Common including the playing field, entry gate, fence and cannons, and added bicycle racks, benches, lights and more than 120 trees. The project extended across the street to Flagstaff Park, which was enlarged and given a new path to facilitate travel between Harvard Square and Massachusetts Avenue.

The Common, a National Historic Landmark with ties to the Revolutionary War, is a well-trafficked site. According to a brochure from the reopening of the Common in 2016, more than 10,000 people pass through daily.

In a letter from the Cambridge Arts Council to city councillors regarding the project, Lillian Hsu, director of public art and exhibitions, wrote that the banner project “highlights the rich stories from ordinary citizens who have contributed to the civic use of a historical and important public space at the heart of the city.”

A companion exhibition for “We Were Here” is on view at Gallery 344, on the second floor of City Hall Annex, 344 Broadway, Mid-Cambridge. Deitsch encouraged residents to visit the exhibition and contribute their own memories of the Common to the project.