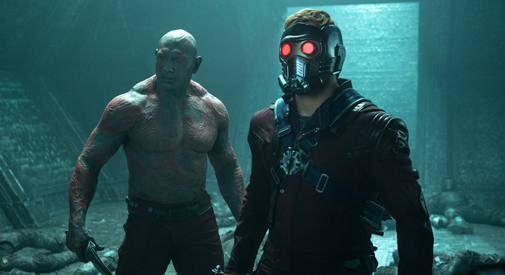 The saying goes that you can’t bottle lightning twice, but director James Gunn has done his damnedest to try. While it’s hard to say if Gunn & Co. managed to capture the exact essence and spirit of the colorful and bombastic first film, it’s simple, rather, to say that he captured something greater. Emotionally vast, enriching structurally and hell-bent on being a feast for the eyes, “Guardians of the Galaxy Vol. 2” is a joyful ode to the simplest, most emotive ingredients of cinema. 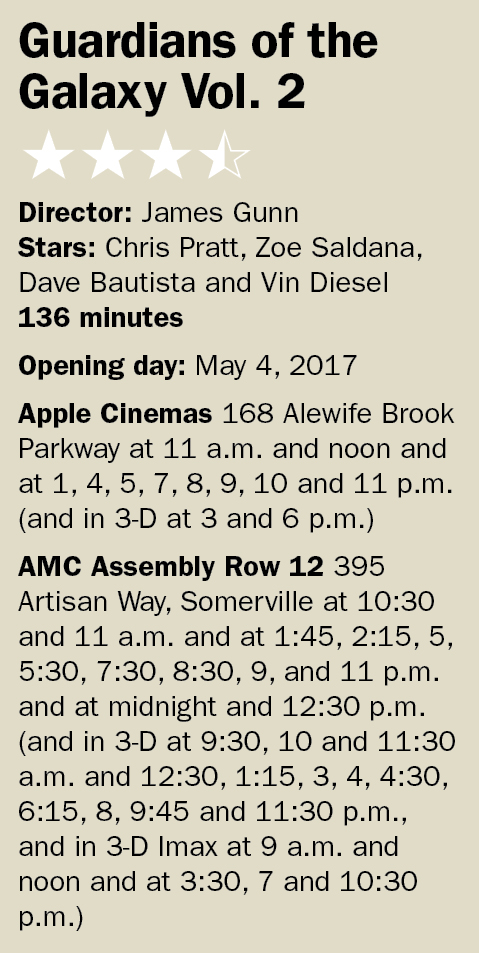 Following the events of the first film, the newly anointed Guardians have been hired to protect a pricy item. But once they find themselves in the crosshairs of their employers, they end up crash landed with Ego (Kurt Russell – perfect casting) who says he’s Peter’s (Chris Pratt) long-lost father. As is always the case, things are not as they seem, and once Ego’s motives begin to unravel, the Guardians must find a way to save the galaxy once more.

If the colorful scenery and brilliantly designed visuals were a main draw in the first film, they’re heightened in the sequel, with Gunn and cinematographer Henry Braham going off the rails in terms of sheer ambition. Possessing intergalactic designs that wow, the designers take the hyperactivity of the first film and make it explosive. Yondu and Nebula are more vivid this time, the blues a stark contrast to the darker backgrounds; aliens spew neon-green goop; and Ego’s semi-sentient planet is a living, breathing acid trip. Despite managing to separate itself from the rest of the Marvel universe, it also has the uncanny likelihood of being the most visually accurate to its origins – each scene could be a frame in the comic book.

The flaws are minor, with the only major quibble being that the father-and-son drama has been done time and again – not just in cinema, but even in other Marvel films. You don’t meet a hero without daddy issues. This is nearly rectified in the way they deal with it, but it could have been further remedied had a similar amount of time been spent on the sister issues of Gamora and Nebula. Drax (Dave Bautista), arguably the MVP of the first film, is perhaps another weaker link of the sequel. Bautista’s character remains charmingly oblivious, but the writers too obviously noted the enthusiasm for the character and dialed him and his humor up to 10.

The rest of the characters fare much better, with Karen Gillan as Nebula and Michael Rooker as Yondu being given significantly more to do as the more morally gray characters in the series. Bradley Cooper continues to deliver such a fine vocal performance as Rocket that it’s easy to forget just who is voicing the character, adding uncanny layers to a performance; we can’t help but wonder how on earth we came to care so deeply about a gun-toting, talking “trash bandit” (in Quill’s words). Zoe Saldana imbues Gamora with just the right note of vulnerability for a machine of a character, sharing a palpable chemistry with  Pratt. He, in turn, isn’t the funnyman any more, but he and Gunn are such a strong pair (say, in comparison to Pratt and Colin Trevorrow, his director in “Jurassic World”) because Gunn understands Pratt’s innate likability. On top of that, Pratt gets to play to more serious and heartfelt moments that deepen the character.

Perhaps the cast’s greatest asset is camaraderie. There’s little doubt these unlikely heroes truly do hold a great affection for one another, raising the stakes whenever one seems in danger. It’s easy to sit back and let a film such as “Guardians” become mindless eye candy, a numbing treatment for those who just want to watch things explode in beautiful colors on screen. Instead, regardless of some natural, narrative bloat that comes with being the second film in a trilogy, “Guardians” is both a visually engrossing and heartfelt film.

Superhero fatigue has become a tired but reasonable complaint, especially as each studio and franchise try to ape Marvel’s success, but this “Guardians” sequel is a reminder of why a superhero film can be such an engaging experience. Beyond the all-consuming marketing and the arrested development nature of these franchises, the greatest gift they offer is a much-needed escapism; it’s the reason we go to the cinema. There’s a need to be transported and “Guardians,” perhaps more than any Marvel movie of late, manages that. The story of the family you choose rather than the one you’re born into rings genuine, as does the fraught nature of those ties and what it means to love and care for someone, warts and all . There’s thematic potency to the story; it just so happens to take place in outer space with pinball-whirling aesthetics, bubblegum vibrancy, a talking raccoon and killer soundtrack.

“Guardians of the Galaxy Vol. 2” taps into that childlike glee that comes with sitting in a dark movie theater, ready to see favorite characters travel worlds and fight off aliens. It’s a giddiness that allows for the audience to turn off the background noise for two hours and keenly wait for the heroes on screen to save the day.