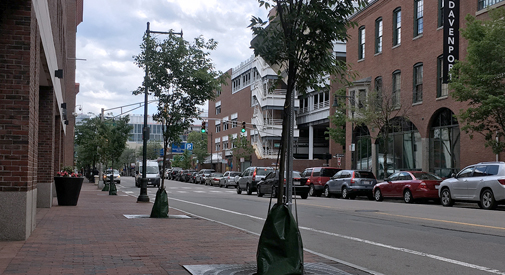 The city has planted more than 1,200 trees, and it’s those saplings needing the most care, city forestry officials say. (Photo: Adopt a Tree Program)

Last year’s drought was hard on most everything green, including the city’s street trees. Their health has been left to the mercy of Mother Nature, a few kind souls and a smattering of small care programs such as the city’s Tree Ambassador Water by Bike Program.

To better care for trees and to engage the Cambridge community – green thumb not required – the Public Works Department has launched an Adopt a Tree Program through which people can claim one of the city’s 19,000 trees after a search via interactive map. (Of those, 12,500 are on public streets and available for adoption.)

The program was launched as part of Arbor Week on April 24, and so far a little more than 40 trees have been adopted. “I hope the Adopt a Tree program gains momentum as it becomes better known,” city councillor Jan Devereux said. “We take our public street trees for granted at our own peril. Climate changes puts both people and trees at risk – we need them to protect us, and vice versa.”

Quinton Zondervan, president of Green Cambridge, said the program will show its value if this summer is like last summer.

“Last year’s drought was terrible, and if anything like that happens again we will need this army of volunteers to save our trees,” Zondervan said. With the Adopt a Tree program, “other people can see that their neighbors care about the trees and are committed to taking care of them.”

Over the past three years, the city has planted more than 1,200 trees, and it’s those saplings Coppinger calls the most vulnerable and needing the most care. With a population of some  110,402 people, getting 12,500 trees watered – when most are trees right outside the front door – shouldn’t be so hard.

For information, go to the city’s Adopt a Tree page.