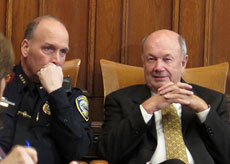 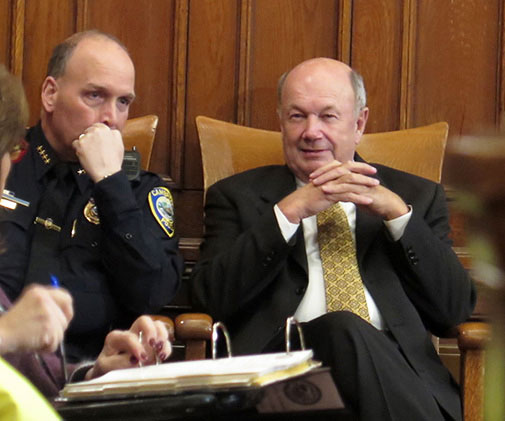 The city manager has selected the finalists for Cambridge police commissioner, but is keeping them under wraps and refusing to disclose them, at least for now.

Longtime Cambridge Police Commissioner Robert C. Haas retired in May 2016, and was replaced by Superintendent Christopher J. Burke, who retired in December. Brent B. Larrabee, an outsider recommended by Haas, came in as acting commissioner for 2017. Larrabee had been chief of police in East Haven, Conn.

“The application process ended on April 9; there were 36 submissions,” Larrabee told the council at a May 2 budget hearing. By April 26 that number was “culled down” for a round of interviews May 8 and 9, he said.

“First-round interviews are complete and I have selected final candidates,” City Manager Louis A. DePasquale told the City Council in an email June 1, which was disclosed Monday. “Final interviews will take place in a few weeks and, in the interest of protecting [the] confidentiality of the candidates, I am waiting until several days prior to the interviews to release the finalists’ names publicly.”

DePasquale did not explain what needed to be protected about the candidates.

Under Massachusetts law, the names of final candidates are a matter of public record. Candidates from earlier screening rounds are generally held confidential to avoid affecting the current jobs of those candidates.

Delaying the release of their names would appear to limit the public’s ability to research the candidates before the final selection, without benefiting the candidates. DePasquale also did not respond to questions about the rationale or timeframe.

But Glowa’s response late Tuesday afternoon was unhelpful: “Because this is an ongoing search, we have no comment at this time. We will inform you when we have updated information that we intend to share with the public.”

The city’s human resources director, Sheila Keady Rawson, has not responded to questions about the size of the finalist pool, sent repeatedly throughout May. Rawson said Tuesday she would be responding soon.

The city will hold a “a ‘forum’ at which each candidate [will] give his view in response to a prepared question,” DePasquale told the council in the June email, implying that all candidates are male.

“This forum will not be open to the public, I will be inviting the City Council and many members of the public and administration to ensure we get a range of opinions and feedback,” DePasquale said in that email.

DePasquale has not explained how the City Council, a public body subject to the Open Meeting Law, can be invited to a private meeting whose subject is “public business within its jurisdiction.” Nor is there any explanation of why the meeting would be private, even if permitted under the law.

The forum is tentatively scheduled for Tuesday, June 20, and councillors confirmed it was on their calendars for 6 p.m. DePasquale is expected to miss a private training session with the Planning Board also scheduled for that date, also not open to the public.

DePasquale and Glowa did not respond to questions about whether the forum would be open to the press.

There will be “candidate interviews with key stakeholders” in the days after the forum, DePasquale also told the council.

Cambridge has a Police Review and Advisory Board charged by ordinance with the review of police policies, practices and procedures. Ann Coyne, its chairwoman, declined to comment on the search. Brian Corr, executive director of the review board, was traveling this week and did not respond to email.

Continuing the theme of opaqueness, just before Monday night’s council meeting, DePasquale requested the council hold a private “executive session in order to conduct a confidential strategy session in preparation for negotiations with nonunion personnel.”

It is not clear whether this meeting was related to the police commissioner search.

“Generally, a public body must identify the specific non-union personnel or collective bargaining unit with which it is negotiating … A public body may withhold the identity of the non-union personnel or bargaining unit if publicly disclosing that information would compromise the purpose for which the executive session was called. While we generally defer to public bodies’ assessment of whether the inclusion of such details would compromise the purpose for an executive session, a public body must be able to demonstrate a reasonable basis for that claim if challenged.”

Because the item was not on the agenda, it could only be discussed if it had not been “reasonably anticipated” before 5:30 p.m. June 8.

Councillors pressed DePasquale before the secret meeting, asking why no more information could be publicly revealed.

“I would say that I took this long and hard to figure out the best way to have this discussion, I talked to the city solicitor all weekend,” DePasquale told Craig Kelley. “This is the only way I feel I can have this discussion with the council, and I think it is important that I have it.”

Nadeem Mazen, alluding to the commissioner search, said there was “an upcoming hire that everyone’s expecting,” and asked if DePasquale could publicly reveal whether the private meeting concerned it.

In response, DePasquale said it was “unusual.”

Asked directly outside of the meeting whether the closed-door session related to the commissioner search, DePasquale said he couldn’t say.

After the private meeting, most councillors seemed to agree the secrecy was justified. “I believe it was appropriate,” Mazen said. “Unusual situation.”

Kelley, an attorney, disagreed, saying while he deferred to the city solicitor, he did not know why the department name or some other limited information could not be given.