MIT acts to change dorm counterculture, but community isn’t going without a fight 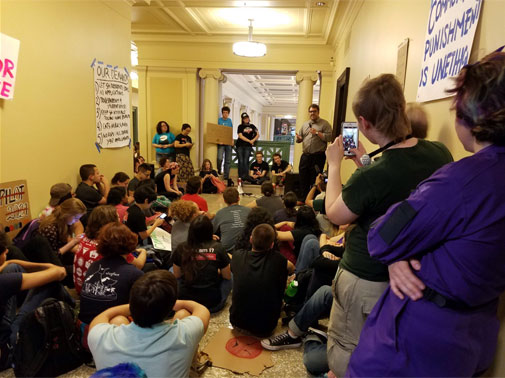 MIT acts to change dorm counterculture, but community isn’t going without a fight

State Rep. Mike Connolly speaks Friday in support of a student sit-in against changes to the Senior House dorm at the Massachusetts Institute of Technology. (Photo: Mike Connolly)

The Senior House dorm known to generations of Massachusetts Institute of Technology students has art everywhere, cats roaming the halls and an eclectic assortment of students who may be low-income, first-generation, black, Asian or Latinx or LGBTQI. Its residents will tell you that – despite winning a Laya and Jerome B. Wiesner Student Art Award in 2013 for the omnipresent murals, dating back to the 1990s and including a recent work by famed artist Shantell Martin – what the 100-year-old dorm is actually most famous for is the way residents support each other.

“I’ve been super depressed in my life – I’m not right now – but whenever I was I could just walk into the lounge and tell my friends, and they would just hug me,” said Abraham Quintero, a Senior House resident who graduated this year. “It’s that sense of community. It’s a classical building, but there’s such a countercultural element on the inside. The contrast is just amazing, and it’s exactly what Senior House is about.”

After decades as the quintessentially quirky east campus dorm at MIT, Senior House was targeted two years ago by Chancellor Cynthia Barnhart, citing low four-year graduation rates and a culture of illegal drug use. Without student input but with controversy over what, if anything, data about those issues showed, Barnhart denied first-year students the choice of Senior House, added mental health support staff and led a committee dedicated to a “Turnaround” plan. 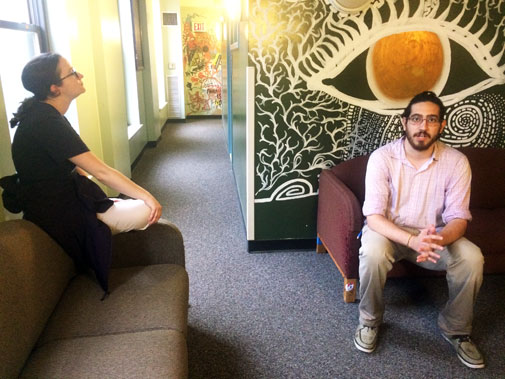 In April, Barnhart – without specifying what happened – said the house was on probation and canceled the Steer Roast party held at Senior House annually for more than five decades. Barnhart doubled down on the changes last week, citing “findings that serious and unsafe behaviors and activities occurred in the house during the Turnaround.”

The announced plan for next year essentially scours Senior House and inserts a completely new culture, relocating current residents and reintroducing a potentially larger percentage of first-year students. Called Pilot 2021, the fresh start emphasizes career exploration with faculty; a cook-for-yourself approach complete with meal kits; and wellness with “in-residence fitness sessions, discounts on group exercise and personal training, and a limited number of reserved spots for popular extreme physical education classes that grant points toward your physical education requirement.” The cats are gone – the only pets permitted are fish.

In an institute thread on Reddit cited on Quartz, an alum calls the plan gentrification and whitewashing. “The new mission statement reads like something from a beauty-product pyramid scheme website. MIT is taking its most racially/sexually/socioeconomically diverse and accepting community and turning it into a yuppie dorm for rich kids,” the alum writes.

The change reflects a broader trend. After failing to find a way to preserve a deteriorating structure, in 2015 the institute demolished Bexley Hall, another undergraduate dorm known for its alternative culture (and identified sometimes as being “just a stoned throw” from the marbled Massachusetts Avenue entrance to the institute’s famed Infinite Corridor). Some people in dialogue on Reddit reported being dismayed to see Senior House dismantled because it was the factor that enticed them to attend MIT instead of Caltech – where administrators have been similarly cracking down on college counterculture. Even more broadly, Cambridge and especially Harvard Square face ongoing conflict over charges of gentrification, while one city over, the Crafts House dorm at Tufts University has faced Senior House-style administrator pressures of its own.

Mel Andrews, a rising senior at Tufts, said there were good outcomes from administrative efforts to tame Crafts House, but only because an intense “self-domestication process” helped retain its spirit. She said she recognized some questionable motivations and tactics in MIT’s actions against Senior House, where she’s been an occasional visitor.

“Crafts House was not good for the Tufts University image in the same way Senior House is not good for the Massachusetts Institute of Technology image, in the eyes of the administration, for a number of reasons – they’ve both been alternative spaces that want to create a sense of community and a sense of success and a sense of identity that, if it does not directly oppose or conflict with the overall university, is at least distinctive,” Andrews said. Students in both houses “can take longer to graduate, their GPAs may not look as good. They may go on to become artists … But the administration has causality there really inverted. They’re trying to purge them from the campus as a means to eliminating the problem of who is underachieving within the university, and that’s not the issue.”

Instead, she said, the university is eliminating communities that serve as safeguards, and end up leaving those students “hanging out to dry, and turning the situation for these students much worse.” 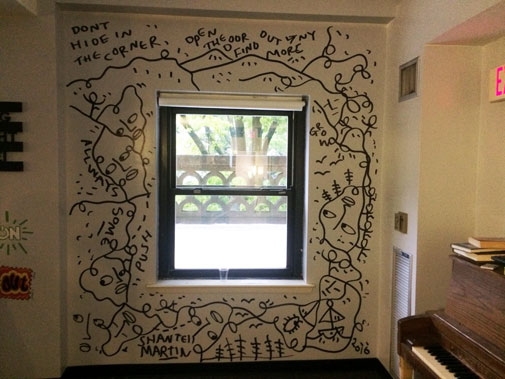 Senior House residents worry that the dorm’s murals, including one by artist Shantell Martin, might be painted over. (Photo: Marc Levy)

One of those formal safeguards is the graduate resident tutor, but at Senior House, the GRTs have been asked to reapply for positions there just like residents. Britni Crocker, a doctoral candidate who chose Senior House for her GRT placement in a “mutual matching process” and said she’s been stunned by residents’ sensitivity toward each other and their sense of community, did not go as far as Andrews in her speculation – but said the administration’s decisions were troubling.

Quintero, though, who was moved to tears Friday in contemplating changes to the dorm that nurtured him for the past year, recounted a story from his graduation ceremony that he believed captured a wider, cultural problem that’s just seen most dramatically in actions against Senior House. At the ceremony, institute President L. Rafael Reif greeted speaker Tim Cook, the chief executive of Apple, by asking students to take out their Apple devices and wave them.

“Disgusting,” Quintero said. But Reif also employed an extended metaphor about “the release of a mind-blowing new product … that people are willing to pay a tremendous amount for,” and one Apple doesn’t have: the MIT graduate.

“They’re turning this place into a factory for the tech companies, for the corporate world, and stomping out individuality,” Quintero said. 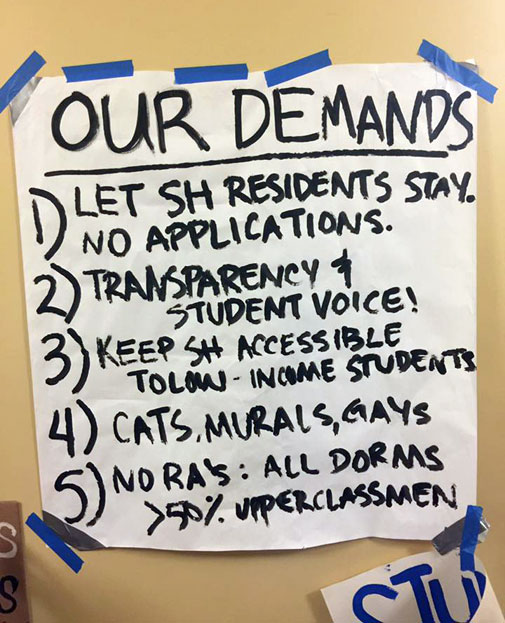 Students and alumni are protesting, starting with a sit-in Friday that drew state Rep. Mike Connolly to participate, and Crocker said more actions are planned. There was to be a community meeting Sunday to set things in motion.

While residents and alums expect the worst – including for the house’s many murals to be painted over, which is why former resident Paula Countouris has been taking high-res images of the art before the building is cleared for the summer – they continue to hope Barnhart will reverse Pilot 2021 and allow back all students who want to return to Senior House. Instead of dismantling the culture, they want only the residents guilty of “serious and unsafe behaviors and activities” removed.

“Maybe some individuals in the house have made mistakes. But MIT has a process to deal with breaking of rules,” Quintero said. “Those who have [Committee on Discipline] processes, maybe those are people who shouldn’t be let back in – if they’re found guilty.”

“But the administration has just started a witch hunt against the whole community,” he said.

Barnhart and the MIT news office was emailed for comment Friday after the sit-in. In an email Monday morning, Kimberly Allen, director of media relations for the institute, said:

The chancellor’s concern is the well-being and safety of MIT students and their residential communities, and that concern has guided our actions. As was shared with students about the decision regarding the next steps for this residence, which comes after nearly a year of engagement involving students, faculty, staff and alumni: “We believe that significant change is needed and have made our decision based on our concern and care for present and future residents of the house.”

This story was updated June 19, 2017, to add a statement from the MIT administration and to correct the timeline of events to reflect that some actions in regard to Senior House were announced in April.