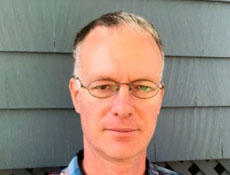 The body of an Arlington man was found near the town line shared with Cambridge, said the town’s police chief, Frederick Ryan.

The discovery came Saturday after “an exhaustive search” by Arlington, Cambridge and state police and Northeastern Massachusetts Law Enforcement Council search and rescue teams, Ryan said. The search began Friday with concerns the man, Patrick Beagan, 45, was depressed and could harm himself.

Beagan had’t been seen since Thursday. His car was found at the Alewife MBTA station on Friday. A body tentatively identified as Beagan’s was discovered Saturday morning. Police said the death does not appear to be suspicious, and there is no reason to believe the public is in any danger.

The Office of the Chief Medical Examiner will make positive identification, and Middlesex District Attorney Marian Ryan’s Office is leading a follow-up investigation.

Beagan worked in Cambridge from 2005 through last year, first at the Art Technology Group and then at Oracle.