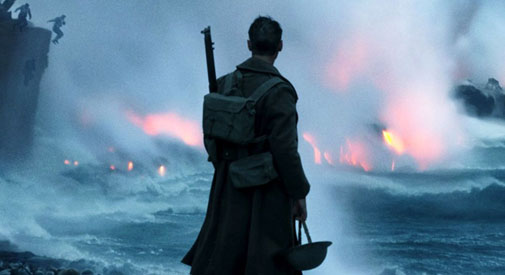 Triumph is simply survival in Christopher Nolan’s latest, blistering film, “Dunkirk,” which follows World War II Allied soldiers from Belgium, the British Empire, Canada and France as they’re surrounded by the German army and await evacuation during a fierce battle. The film centers on characters in three different narratives in the sky, on the sea and on the beach, where they’re pushed to the ocean and unable to retreat, awaiting rescue as targets for the enemy. With an interwoven script that intersects when you least expect it, the film is a mighty example of storytelling and the power of atmosphere.

Nolan, a director who’s known for his big, operatic science fiction – from the “Dark Knight” trilogy to the mind-bending “Inception” and the divisive “Interstellar” – has been often described as a “cold” director, one more interested in the way plots intersect and time can be maneuvered than in characters and their motives. There’s truth to this, but the chill audiences feel can be chalked up to the sheer, technical prowess of his achievements. With “Dunkirk” Nolan does away entirely with that criticism with a film that is stunning on all technical platforms while delivering a story that packs an emotional wallop. It’s muted and hard to detect while in the midst of a sensory overload, but the heart is there – pounding from anxiety and terror, but there – and providing a welcome backbone to a film that without it might have been far too excruciating to enjoy.

It’s one of the director’s shortest films and his most verbally silent, a film where speaking is taken over by the the sound of gunfire, crashing waves and the omnipresent sense of a clock ticking down until doomsday, aided by a Hans Zimmer score that emulates the sounds of that ticking clock. From the first, ear-shattering bullet, we’re warned of the maximal nature of the film and the state of anxiety it’s going to to impart from the minute we land on the beach. The horror of the soldiers is often heard, rather than seen, as Nolan refuses to exploit bloodshed and carnage for the sake of it. Rather, we hear a terrified scream, out of eyesight but with full understanding of what’s happened. We are kept in confined spaces with soldiers as lights in Red Cross ships are kicked out and water consumes them, blind and deaf to the world as it tilts. It’s a truly visceral experience, and we’re left holding our breath and ducking our heads as bullets ricochet off ships and explosions come inches from killing main characters.

It’s some of the director’s most impeccably shot work, in line with “Inception,” “Interstellar” and “The Dark Knight,” with cinematography by Hoyte van Hoytema creating a sense of claustrophobia even in wide open spaces. There’s a desperation to how everyone is depicted – no longer fighting an enemy on land but instead fighting the elements, the bullets that comes from above while they’re exposed and the irony of how home, on a clear day, can be seen on the horizon, leading some men to think they could simply swim across (with tragic results).

The cast is made up of some of Britain’s finest working actors, with Mark Rylance, Tom Hardy and Kenneth Branagh taking up pivotal roles – and with Hardy reminding everyone just how expressive his eyes can be as a Royal Air Force Pilot whose face is largely obscured. Newcomers include our lead of sorts, Fionn Whitehead, a British army private, the eyes and ears of the film, the audience surrogate, speaking little but leaving an impression due to the stark nature of his youth. Harry Styles makes his film debut as the charismatic Alex, holding his own again the other newcomers and proving a natural in front of the camera.

Refusing to ever name the “enemy,” the film worries itself instead with small acts of heroism and the spirit of the English who ferried small fishing boats across the ocean to France facing unknown dangers to rescue their doomed young men. It focuses on the silent camaraderie built between soldiers who are desperate to make a hasty escape, or a fighter pilot who persists against time, enemy gunfire and chance to pull off last-minute saves. It’s a war movie without the typical trappings of such, making sure that beyond all else, rather than being about the war it’s about those who fought in it and what happens when they’re left adrift. The film has the good sense to be deeply wrenching without drowning in tragedy, allowing just the slightest bits of hope and pride sneak in.

No matter the talent of the actors, cinematographer or composer, the star of “Dunkirk” is undoubtedly Nolan’s work as director. From the sweeping aerial shots that will make you dizzy with anticipation and awe to the manner in which we watch a lone sailor cross the sea to do his part for his country and young men sent off to fight for it – that mere dot on the horizon – to the haunted faces that line the beaches, all hurrying to line up for a rescue that may never come (and, when it does, could put them in greater peril). It’s a film that is so largely about defeat that when the moments of triumph come, they feel far greater for the audience than for the characters, whose young shoulders still carry the weight of the loss that led them to that beach. It’s a somber, sometimes painful film to watch. Nolan focuses on the harrowing nature of the event with small moments, such as shell-shocked soldiers being unable to hold in their fear, or how desperation to survive can lead to moments of uncharacteristic inhumanity and selfishness, or how one man’s act of heroism may save many but is ultimately a sacrifice. It’s those ideas mixed with the sheer beauty of the film that make it one of the year’s finest, and unquestionably Nolan’s finest and most powerful work to date.