‘Detroit’: Bigelow jumps right into a riot both historical, painfully on point for U.S. 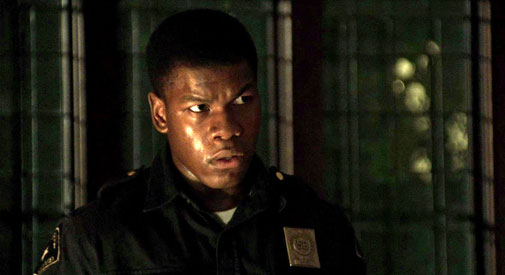 ‘Detroit’: Bigelow jumps right into a riot both historical, painfully on point for U.S.

The long hot summer of 1967 marked a defining moment in U.S. history. Out west a music festival sparked the “Summer of Love,” while across the rest of the country race riots ignited in the street – most explosively in Detroit, where the National Guard was rolled in and a curfew imposed. Such is the backdrop for Kathryn Bigelow’s searing dramatization of “Detroit,” a city steeped in chaos, terror and unadulterated racism. 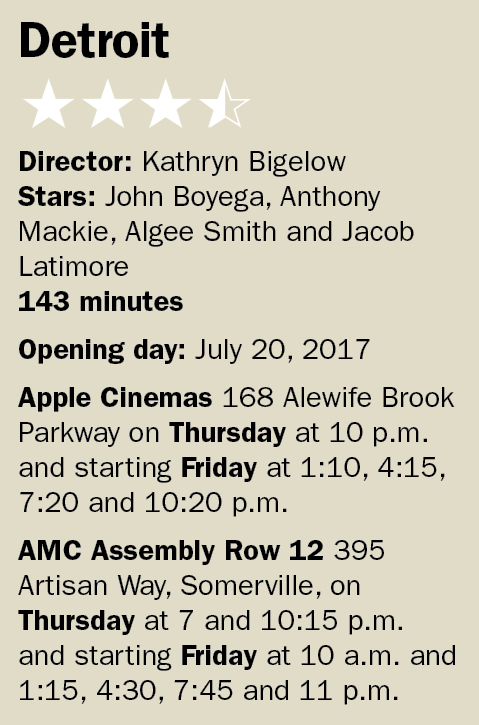 The movie makes no big pretensions – even in title – as it wades into the mayhem with a journalistic eye. Right from the start you’re dropped into a street stampede, storefronts are aflame and a line of police hold fast trying to maintain order and stem looters. It’s so immediate and on the spot you feel almost as if you’re embedded on a war mission, which might be more intentional than not as screenwriter Mark Boal, who collaborated with Bigelow on the harrowing Iraq War drama “The Hurt Locker” (for which they both raked in Oscar gold) and “Zero Dark Thirty” actually did embed with U.S. forces in Iraq. Even more to the film’s point, what was going on in Detroit at the time was a war not unlike the one we face now. Fifty years after the fact, Bigelow’s revisit of unrest and the color divide casts a historical light on the blight of blue-on-black injustice and the “Black Lives Matters” movement; given events then and now, it feels about the same.

The film’s focus isn’t so much a chronology of the five-day riot, but the siege of the Algiers Motel where – as history records – three young black men would be dead in the wake of a nightmarish evening of kangaroo-court interrogation tactics and heinous civil rights violations. How events conflate and the narrative takes root is a bit of a meander, but not a detraction. Beyond the shock of street violence we catch up with two young cops, full of swagger and fear, who jump out of their patrol vehicle to chase down a looter with what looks like just a bag of groceries. He’s fast, and they’re not going to catch him, but still it’s a shock when one of the officers, a baby-faced cop named Krauss (Will Poulter, who tackles the unenviable role with aplomb) whips out a shotgun and blasts the looter – seemingly just a scared family man – in the back. Initially, I thought it had to be rubber bullets or salt; but no, the man bleeds out under a car and Krauss is hauled in and interrogated. He doesn’t see much of a problem with what happened, even as higher-ups float murder chargers, and given what’s going on in the street, Krauss and partner Flynn (Ben O’Toole) are sent back out into the fray in the vicinity of the motel.

The other two threads involve Melvin Dismukes (a somber John Boyega), a black security guard watching over a convenience store across the way, and Larry Reed (Algee Smith), lead singer of the up-and-coming Motown group The Dramatics, whose show was canceled due to the unrest in the street. They end up at the Algiers after Krauss and other Detroit police respond to what they believe are gunshots. (Turns out some unwise soul was horsing around with a starter pistol.) Needless to say, the hotel gets shot up and all the residents rounded up and systematically terrorized by Krauss and Flynn, employing shenanigans that make the acts of Jason Clarke’s torturer in “Zero Dark Thirty” seem tame by comparison. Not only are Krauss and Flynn racist; they’re megalomaniacs. The one feeds the other in frenzied fashion as the night plays out in a long, agonizing, three-act format.

The nightmare draws eventually to its bloody conclusion and we fall into a courtroom, where a wily attorney (John Krasinski) defending Krauss and Flynn spins law and perception with adroit skill. Given where we are today, you know how it goes, but the maneuvering between the event and the trial is grotesquely eye-popping.

Bigelow and cinematographer Barry Ackroyd shot “Detroit” in and around Boston. Besides Krasinski, Boyega (of “Star Wars” fame) and Anthony Mackie (“Captain America” and “Hurt Locker”), who plays a recently retuned Vietnam vet caught in the Algiers with two white women, Bigelow employs relatively new faces. The film’s likely to launch Poulter and O’Toole the way Bigelow’s other films sent Jeremy Renner and Clarke onto bigger things. Poulter’s unapologetic, near amoral countenance becomes the film’s centerpiece and a lingering reminder of hateful indignation and miscarriage of justice that still stains our country today.