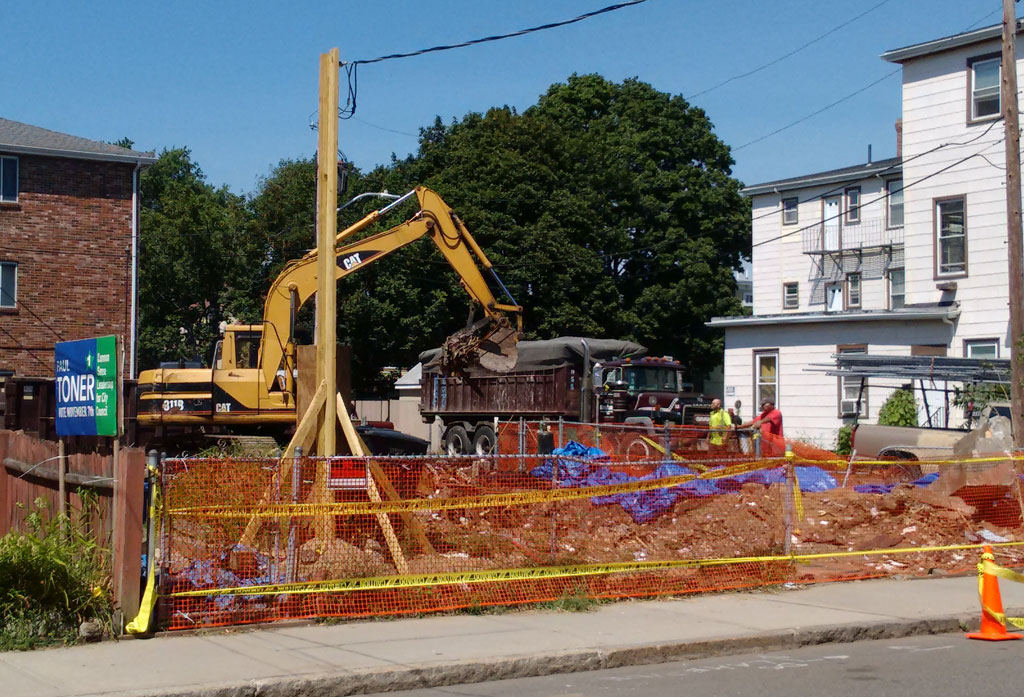 Workers clear away the wreckage of the home and garage at 43 Cedar St. last week. (Photo: Sue Reinert)

Leaders of a North Cambridge neighborhood group say lack of attention from city officials allowed a developer and a contractor to omit necessary safety precautions during the demolition of a condemned home and garage. The derelict building at 43 Cedar St. collapsed onto the sidewalk and street Aug. 11, burying a neighbor’s parked car. No one was hurt.

Michael Brandon, clerk of the neighborhood group North Cambridge Stabilization Committee, sent an email Aug. 7 to Inspectional Services Department Commissioner Ranjit Singanayagam and David Byrne, the inspector assigned to the property, asking them to “monitor the [demolition] closely,” make sure debris was watered to control dust, that stored debris was covered, that the site was properly fenced and, in a prescient warning, that “the streets and sidewalks are kept free of dirt and obstructions.” He didn’t get a response, Brandon said.

In an interview, Singanayagam and Byrne said ISD followed all required procedures. “It was normal,” Byrne said in an interview. “We can’t be monitoring everything,” Singanayagam said. “We rely on licensed professionals” such as Elton Allen of Dorchester, the demolition contractor who did the job.

A neighbor captured the scene on camera, showing debris spilling far out into the street and seeming to completely cover a parked car:

Allen declined to answer questions when approached at the site, and he didn’t return a phone message. Developer Brian O. Lavelle said he was with his son at an Indiana college when reached and could not immediately respond. Though he said he might be able to answer emailed questions, five days later he had not answered the email.

Brandon also asked for evidence that the buildings had been examined for asbestos, another requirement. Again, he received no response, he said.

A reporter found a report in department files indicating asbestos, a hazardous material, was found in flooring in a first-floor kitchen, but there was no indication it had been removed before the demolition, as required. Asked about it, Byrne said a licensed asbestos contractor had carted the flooring to an approved disposal facility, but the disposal report wasn’t in the file because the asbestos had been removed under the supervision of the state Department of Environmental Protection, not the city agency.

Inspectional Services officials “should have made sure” workers blocked the sidewalk and prohibited parking in front of the property during the demolition, given the precarious condition of the buildings and the “proximity of inhabited housing,” Brandon said. “It’s frustrating.”

Instead, the department did not require Lavelle or Allen to get permission to block parking and the sidewalk, records showed.

Brandon also said that upon arriving at the site shortly after the collapse, he saw clouds of dust rising from debris on the sidewalk and street, with no one wetting it down. An ISD inspector – not Byrne – was looking on while talking to a police officer; the inspector told a worker to hose the pile only after Brandon asked him to, Brandon said.

Byrne said that when he got to the property the debris was being watered properly. As for not blocking the sidewalk and restricting parking, he and Singanayagam said the building was at least 17 feet from the walkway and no one expected it to collapse the way it did.

Byrne said he was mystified by the collapse because workers usually take down a building by dragging material into the middle of the property. Why the house fell onto the sidewalk and street “is the million-dollar question,” he said.

Still, neither man knew who in city government, if anyone, was investigating the incident.

After the event, the department ordered demolition work halted until Allen covered the debris with a tarp and installed a six-foot-high chain-link fence along the sidewalk, Singanayagam said. (A four-foot fence had bordered part of the walk).

But work resumed before the higher fence was in place because Allen had difficulty finding one, Byrne said. In the meantime, workers filled the gap in the existing fence with orange plastic construction fencing. The contractor blocked the sidewalk and curb with plastic sawhorses and yellow construction tape; demolition was complete as of Tuesday. 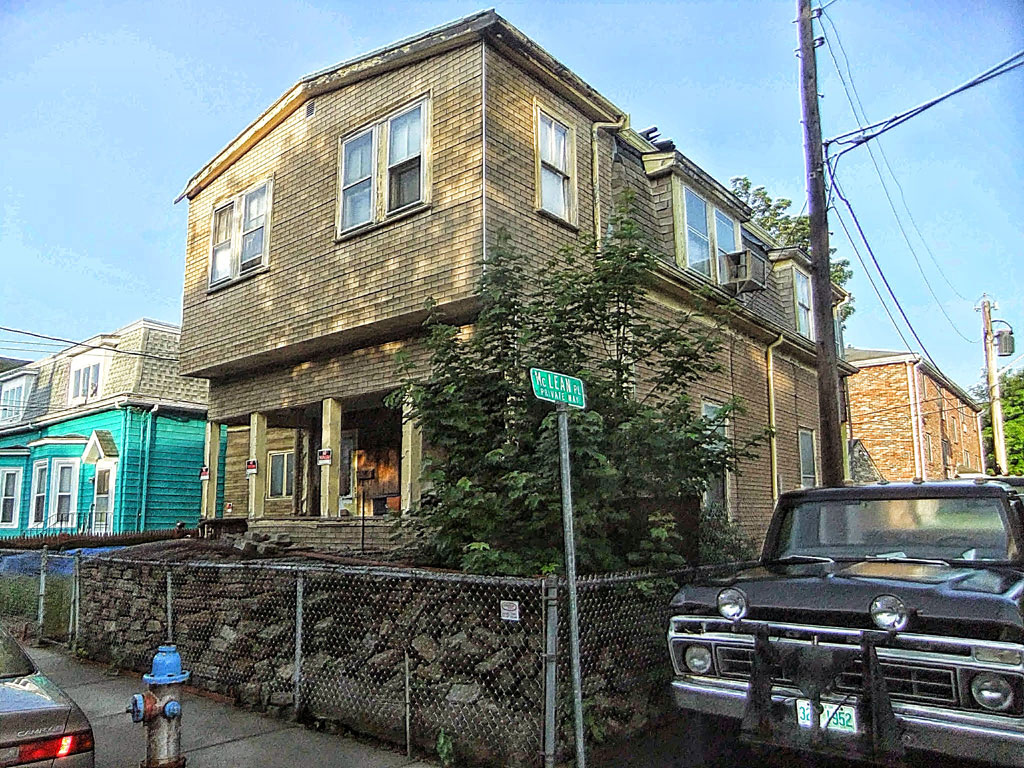 The home and garage have been deteriorating for years while neighbors, along with the North Cambridge Stabilization Committee, sought to get it repaired or demolished. Brandon believed the city had been hearing “intermittent complaints from abutters for close to two decades.”

Former owner Michael A. Pinksen obtained the property in 1999, apparently from a relative, according to records at the Middlesex Registry of Deeds. Pinksen had his own construction business.

According to records, financial problems mounted for Pinksen, who now lives in Malden. Electric and gas utilities sued him for unpaid bills. The city and state placed liens on his property for unpaid taxes. The bank that held a $150,000 mortgage on the property started foreclosure proceedings.

Pinksen paid off many of the debts, but the home and garage crumbled. The roof failed, letting water in and worsening the condition of the buildings. Pinksen tried to repair the roof himself; a neighbor recalled seeing him come home from a day’s work and attack the roof job at night. He didn’t succeed. 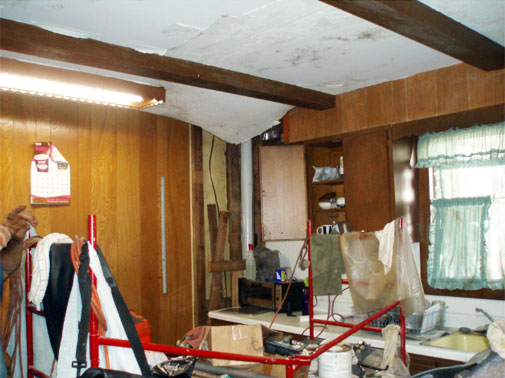 The kitchen ceiling at 43 Cedar St. was only one of many causes for concern found during an August 2015 visit by a Board of Survey.

He refused to let inspectors onto his property, and the city sued him in 2015, seeking to force him to make repairs. A private engineer, the fire chief and the city engineer made an in-depth inspection in 2015. They found mold, rotting wood, buckled floors, crumbled plaster, a portion of collapsed foundation and evidence that other structural elements were failing, along with other building violations.

Construction materials and equipment filled the garage; there was a pile of cobblestones in the yard. Defunct trucks were parked along side the property on McLean Place, a private street.

The city condemned the buildings. A Middlesex Superior Court judge appointed a receiver in 2016 to have the buildings repaired, but the receiver concluded that they couldn’t be, Brandon said. Instead, the receiver sought a buyer.

Lavelle, who had renovated a Cedar Street home and built another about a block away, offered to buy the house and garage, demolish them and build two townhouses on the site, but only if he obtained zoning permission to exceed the size limit for homes on the parcel, Brandon said. After agreeing to downsize his proposal slightly to meet objections from a neighbor, Brandon said, the Board of Zoning Appeal approved the project in April.

Brandon said the North Cambridge Stabilization Committee made a rare exception to its policy of not favoring zoning exemptions, supporting the project.

In May, Hawthorne Development Ventures bought the property from Pinksen for $860,000. Corporate records show Lavelle is the manager of Hawthorne Development. Another limited liability corporation, Hubbard Street Ventures, is also involved. The manager of Hubbard Street is Erik Jarnryd of Concord, co-chairman and co-chief executive of Harvey Industries of Waltham, a large building products company.

The deed cited the receivership case and provides that Hawthorne must bring the property into compliance with building codes within six months of when the deed was recorded at the Registry of Deeds. If not, Hawthorne will become the defendant in the city suit, the deed says. Although the sale went through in May, the deed was not recorded until July 24.

Singanayagam said the city will consider the property in compliance with building code once the buildings are gone; Hawthorne doesn’t have to complete construction of the townhouses, he said.

This post was updated Aug. 22, 2017, to correct details about Brian O. Lavelle’s previous work on Cedar Street and the name of the Board of Zoning Appeal.