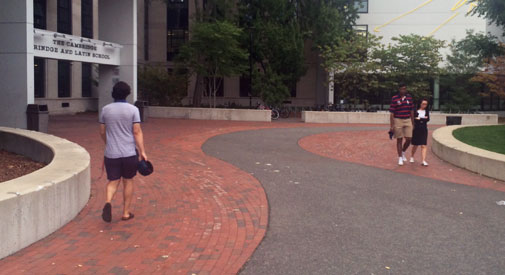 A near-total rewrite of the school district’s “Rights and Responsibilities Handbook” and Cambridge Rindge & Latin School student handbook for 2017-18 – neither of which most students have ever seen – was urged by members at length during the School Committee’s meeting Tuesday, the first of the school year.

The handbooks are massive, often overlapping documents edited piecemeal over years; “Rights and Responsibilities” is an odd mash-up of carefully crafted prose and staid legalese taking up 83 single-sided pages and available only online.

The high school student handbook, at more than 40 pages, tries to offer more specific CRLS-related policies and guidance in relatively clear language. (It, too, is apparently available only online.) It covers topics such as key dates and staff contact numbers; a mission statement; student services, including tutoring or college application assistance; and a large section from “Rights and Responsibilities” on attendance, behavior and disciplinary policies. Students do not receive mention of it in their annual August packet of forms and information.

At the beginning of each school year, district students and families get a paper copy of a separate, 49-page “Guide to Policies for Students & Families” and need to sign a form saying they have read it. It also seeks to summarize “Rights & Responsibilities,” which it refers to without providing a link. It does not mention the CRLS handbook.

As state requirements change – on bullying, special education or gender-identity protection, for example – portions of these documents have to be rewritten with assistance from the district’s legal counsel, Maureen MacFarlane. Revisions need School Committee approval. Changes require two votes, with a public hearing for comment between them. This week, MacFarlane presented edits in the Rights and Responsibilities Handbook and CRLS Student Handbook to reflect two changes: the providing of Chromebook computers to all first-year students, with more in other classrooms; and an update of some staff titles.

A recent major revision was last year’s rewrite of the dress code after a collaboration of high school students and staff. That change, though it can be found in the two online-only documents, is not reflected in the paper “Guide to Policies” – there is, in fact, no reference to dress code at all in the only document that goes to each home.

The Tuesday hearing, ostensibly about Chromebook and title changes, allowed reexamination of other parts of the regulations. Parent Karen Dobak, co-chairwoman of a special education advisory council, worried that the guidelines put too much emphasis on suspension as a form of punishment, referring to a Sept. 2 New York Times op-ed by David Kirp, “Don’t Suspend Students. Empathize.” Dobak argued that removing a child from the classroom is a form of suspension, and asked for a commitment to immediately track and reduce classroom removals.

Parent Corrine Espinosa drew attention to a “punitive” CRLS attendance policy that lowers a student’s final grade by a whole grade for four or more unexcused absences or tardiness; in addition, three tardies adds up to one absence. (Again, “attendance violation policy,” or AV, is not in the guide sent to student homes; it is referred to in the online CRLS Student Handbook, but characterized inaccurately.)

“The punishment is the same for being two minutes late as showing up 55 minutes late,” student School Committee member Paul Sullivan noted. He agreed with Espinosa that it disproportionately harms some students – those whose parents don’t call in with an excuse – many of whom “face real obstacles to being on time.”

Committee members agreed this and other issues need addressing. “These documents still remain highly punitive in my eyes,” member Kathleen Kelly said. “It does not emphasize solutions.”

“I know that every one of us has expressed concern about improving these [documents],” Member Patty Nolan said.

The question was how and when. Members discussed approving the proposed changes and committing to taking up discipline later; passing proposed changes while removing AV entirely, with a rewrite due later; or referring the document to a subcommittee without immediate passage. Tuesday’s vote was a “second reading,” meaning the vote would finalize the entire documents until a new recommendation.

“The AV stands no matter what we vote tonight,” Nolan said, “because if we vote it down, the current policy stands.”

Members decided to create an ad hoc committee to propose solutions by December, in time to preclude punishment applied to first-semester final grades if the language is amended. They also agreed in spirit to tackle a broader rewrite later, probably through a subcommittee. “A 100-page document isn’t going to get rewritten in two or three months,” Kelly acknowledged.

By Thursday, vice chairman Fred Fantini had appointed members Emily Dexter, Kelly and Nolan to the ad hoc committee, with Dexter to chair.

A joint motion by Kelly and Mayor E. Denise Simmons requesting an administration update on implementing districtwide non-discrimination and gender identity policies was passed unanimously and quickly. “It’s been two years since the policy passed,” Kelly said, “and I want to see how well it’s been implemented” in bathrooms and locker rooms, and how responsive staff are to “students’ chosen name and pronoun.” The report is due in October.

Also passed was a motion by Simmons and Dexter requesting an estimate of the total annual cost for the district to pay for “all field trips without parents paying any of the costs.” Chief Operating Officer James Maloney said he could get a “first cut” estimate by October, noting that the amount and procedure ranges widely across schools.

To that point, Simmons said she didn’t want jeopardize what Fletcher Maynard Academy Principal Robin Harris does: raising tens of thousands of dollars annually to take groups of students abroad. “I don’t want extraordinary school trips to stop,” she said, “if we [end up] wanting all schools to do the same thing.”

Member Manikka Bowman warned against making assumptions about poorer families’ relative abilities to raise funds – noting that she, like member Richard Harding, “grew up in public housing.” “Fundraising efforts can be galvanizing to communities,” she said.

A report on school-based nonprofit family organizations’ fundraising and organizational efforts and needs will be presented to the committee soon, said Fantini, based on work done by his governance subcommittee.

A $1 million Title I grant award was initially tabled by Nolan because she wasn’t supplied with information on how the district decides to allocate funds across the eight Title I schools – identified by the state based on poverty levels. She has requested the information with each year’s grant renewal. After whispered negotiations among administration and members, Nolan moved at the end of the meeting to allow a vote “because she did not want to put the district at risk re: the payment of salaries” funded by this grant; in turn, Superintendent Kenneth Salim promised to get the information to her in the next week. The motion passed.

Before the committee voted to approve a $195,000 Title IIA grant, Dexter noted that the new school budget seemed to support a “Teacher Induction” position. Salim acknowledged that changes in grant restrictions made that position ineligible for the grant funds, so it had been “moved to general funds”; other expenses in the general fund were being paid for by the Title IIA grant.

Although the total expenditures do not change in this arrangement, a position paid for by grant funds has been shifted to the district budget.

Members passed several contract allocations and grant acceptances for the new school year’s operations, including a $2.5 million allocation to several institutions for out-of-district special education day and residential tuition. A contract for $27,000 to transport an out-of-district student was pulled for discussion by Nolan, who inquired about the district’s legal requirements to provide full transportation costs for one student even though the district does not pay for transportation for CRLS students. Salim and Maloney assured members that the district is in fact required to pay, and that they had explored all alternatives. “Sometimes,” Maloney said, “we are able to cost-share with other communities, but not in this case.”

Passed unanimously without discussion were two amendments to educator contract agreements, clarifying and adjusting salaries for teachers and paraprofessionals in 11-month positions, as opposed to the usual 10 months assumed in contracts; and updating position titles in the district’s staff grievance policy.

Also passed without discussion were contract awards of $45,000 for legal services related to staff visa and immigration issues, $100,000 for Medicaid-related professional services, $135,000 to Riverside Community Care for special education services, $270,000 for three years of meat products (the contractor was the sole bidder) and $90,000 for “interactive display hardware”; and revisions to the policies surrounding sports-related head injuries to update state law references and “remove references to a proprietary product.”

Grant awards passed without comment were a $31,000 state grant for stipends for teachers mentoring new teachers, a $75,000 Perkins government grant for support for occupational education vocation skills, a $10,000 Nellie Mae grant for the kindergarten program, $30,000 in federal funds for supporting homeless students, $704,000 in state funds for continuing the extended school day at the FMA and the Martin L. King School (which is $22,000 less than last year’s grant) and $54,000 from the state to pay and support an inclusion paraprofessional.