‘Battle of the Sexes’: In tennis court battle, King’s score wound up higher than love 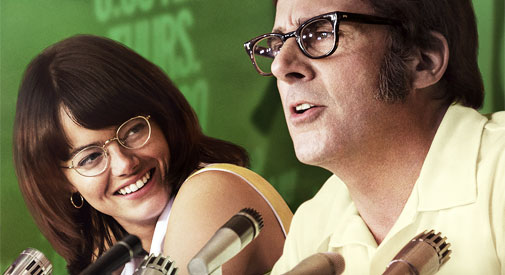 ‘Battle of the Sexes’: In tennis court battle, King’s score wound up higher than love

“Battle of the Sexes” is more than just an empowerment victory lap for women and others seeking equality; it’s a heartfelt love story or two, and a fantastic time capsule resurrecting the early ’70s with aplomb. It’s also a sad reminder of just how deeply chauvinistic mainstream culture used to be (and still is). Take the venerated sportscaster Howard Cosell commenting in the preamble of the titular event (an ABC primetime broadcast that was almost as big as the Super Bowl) that if tennis pro Billy Jean King (played by Emma Stone) lost her wire-rimmed glasses and bland bob, she might shock the world with movie star good looks. Did Jimmy Connors or John McEnroe ever get brought up for their appearance? 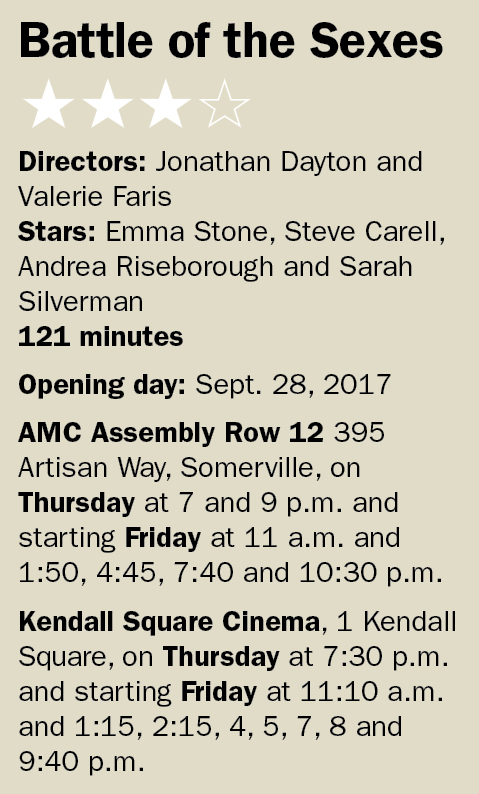 King by all rights was a trailblazer, the first female professional athlete to earn more than $100K in a year and a reluctant feminist icon who sought better pay for female players who were paid “eight times” less than their male counterparts. Resolute and unwavering to pro tennis tour honcho Jack Kramer (Bill Pullman) and his claim that men were the bigger draw, King retorts that the women sell just as many tickets at the same price. Solid logic, brushed aside. That’s when King and tennis promoter Gladys Heldman (a sly and deft Sarah Silverman) decide to create their own tennis circuit (what becomes the Virginia Slims Circuit). Kramer initially can’t believe the bluff and goes on the offensive in the media, saying the idea will fail – when it begins to take root. Not onscreen much, Kramer becomes the film’s de facto villain, more so than Bobby Riggs (Steve Carell), the other half of the “battle,” who at age 55, an anointed tennis legend (Grand Slam winner, former No. 1 player and tennis hall of farmer) bored with life and addicted to gambling, reinvents himself by calling out King after her fiscal milestone. He’s a lover of the limelight, and needs more than the bareknuckle tennis matches he and his scotch-sipping cronies stage – with handicaps, of course. In one deftly comical scene, Riggs has to hold a pair of Afghan dogs on leashes while dodging a series of folding chair obstacles placed on his side of the court. For his troubles he wins a Rolls-Royce.

The heart of the movie, as written by Academy Award winner Simon Beaufoy (“Slumdog Millionaire”) and directed by Jonathan Dayton and Valerie Faris, the dynamic duo behind the infectiously offbeat “Little Miss Sunshine,” lies in King’s quiet, personal travails and her intrepid spirit. Sure, she was on top of the world, top-ranked and with hunky husband (a somber and sensitive Austin Stowell), but the battles she undertakes against men of power and for the woman who unlocks her heart, hairdresser Marilyn Barnett (Andrea Riseborough, coy and caring in the part), bring stiff and unexpected challenges, especially at a time LGBT acceptance was lightyears away and exposure would mean crucifixion in the media and stripped sponsorships. It’s a buttoned-lipped burn that registers slowly yet surely in Stone’s brave performance. The actress, so good in “Birdman” and “La La Land,” finds another gear, making the most of her center court moment. With wide eyes and tremulous lips, she seizes on King’s uncertainty and cause with deep, empathetic care. It’s a dignified and game go, and you root for Stone the actress almost as much as for the persona she’s embodying.

King initially turned Riggs down, and she might not have given him a second chance had he not turned to her rival Margaret Court (played with effective, stoic homophobic undertones by Jessica McNamee) who still holds the record for the most singles win (Williams sisters included) and dispatched her with such chauvinistic, showoff glee. “Women belong in the kitchen and the bedroom,” becomes his boorish mantra. Through it all, Carell keeps Riggs likably buffoonish. You feel as if it’s just an act (and Kramer’s always in the wings to upstage him on the deep-seeded sexist side of things) and he’s offset by his caring yet fed-up wife (Elizabeth Shue, in a subtly soulful performance) who wants him to stop gambling and grow up. King and Barnett never become more, but Riggs and his wife, about to split, end up better afterward.

Of course the main event in the Astrodome eventually does come, and you can see Carell and the crew drooling over the fun to be had with all of Riggs’ pregame antics – posing nude, dressing up as Little Bo Beep for media sessions and so on. The cinematic rendering of the match, especially the choreography of the volleys, is crisp, realistic and resolutely clap worthy. In the end there’s triumph and wins on both side of the net. The world’s eyes are widened some too, as folk such as Kramer (as portrayed) and his ilk (Trump certainly a member of the tribe) bite down hard on their back teeth. Dayton and Faris’ whimsical tone becomes a satirical reflection of a time that’s also all too applicable now.