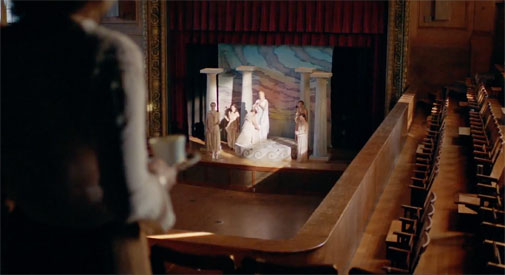 Arlington Town Hall was spotted by a Cambridge line producer as a location for the film “Professor Marston and the Wonder Women.”

Neighboring Arlington plays a role in the just-released biopic “Professor Marston and the Wonder Women” thanks to Cambridge’s Mike Bowes, a line producer who scouted the town originally for a documentary four or five years ago.

For two of the five-plus days a production crew was in town, Arlington’s Town Hall and Masonic Temple were used to shoot scenes in the life of a Harvard-educated psychologist and Tufts University professor with an intriguing life as an inventor and comic-book creator. (It opened nationwide Friday, including at theaters in Kendall Square and Somerville.)

Bowes called the Masonic Temple “a special place,” “fantastic” and “just what we needed” for the film whose period ranges from the 1920s to 1940s. Built in 1923, the structure rises above Academy Street with fine period woodwork, a terrazzo floor and antique furnishings.

While at the temple, he crossed Academy Street, peeked in at the 1913 town hall’s auditorium and was “blown away.” Town Meeting members who may have long gazed at the Beethoven image above the stage likely have imagined a space more geared to politics than the arts, but Bowes found the perfect “theater space.” It appears about one minute and 13 second into the “Professor Marston” trailer. Canton, Lowell, Milton, Norton, Tewksbury and Waltham were also used in making the film, though Marston lived most of his later years in Rye, N.Y.

“Professor Marston and the Wonder Women” is directed by Angela Robinson and stars Luke Evans, Rebecca Hall, Bella Heathcote, Connie Britton and Oliver Platt. It cost between $3 million and $5 million to produce.

It attracted national distribution, in part, because of a “Wonder Woman” effect: The success of that 2017 film about the Amazonian cartoon character has give it traction, Bowes said.

Bowes, who grew up in Lexington, has been working in the film industry since 1999. He graduated from the University of Massachusetts at Amherst with a degree in communications. As the line producer, he deals with the physical aspects of the production and makes it work,  hiring crew, dealing with the location and equipment.

Part of his job is to maintain relationship with local officials, explaining what a movie crew is up to. In Arlington, that meant Town Manager Adam Chapdelaine and Patsy Kraemer, who handles Town Hall-related issues.

Next spring, Bowes said he expects to use the Masonic temple again in a documentary about American cross-continental flight produced by Stephen Lyons, of Arlington.