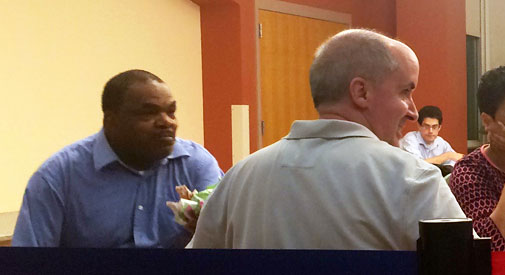 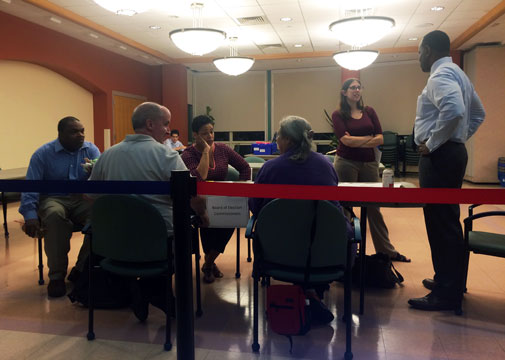 The Election Commission and staff prepares for a Sept. 8, 2016, primary ballot count. Chairman Larry Ward and commissioner Charles Marquardt, those seated farthest to the left, were absent from a Wednesday meeting that was canceled for lack of quorum. (Photo: Marc Levy)

There weren’t enough election commissioners on hand Wednesday to hold the random draw of precincts setting the order of Election Day’s ballot count.

“We didn’t have a quorum,” said Lesley Waxman, assistant director of the city’s Election Commission, reached by phone Thursday. Commissioners will set a next date for the random draw when they meet again next week, she said.

The order of precincts can play a role in deciding who gets elected because of Cambridge’s ranked form of voting. Starting with a precinct from East Cambridge where voters might choose candidates from that neighborhood, for instance, could mean that “discarded” votes cascade from one candidate to the next in a pattern different from if the first precinct is from West Cambridge. It’s enough of a signifier in Cambridge elections that the expected draw had a small audience of candidate representatives, politics watcher Robert Winters and a camera operator from Cambridge Community Television.

The delay is not a problem in itself. “The random draw is to be held on Election Day at the latest. It’s been on a variety of days in different years,” Waxman said. Oct. 18 is actually the earliest date she knew of for it to be scheduled. Election Day is Nov. 7.

But former election commissioner candidate Gary Mello, who has long criticized the commission for its pay structure and approach to municipal work, was also at the canceled draw, and sent a sharp letter Thursday to the City Council to explain what happened: Commissioners Ethridge King and Polyxane S. Cobb were at the meeting as expected; the other commissioners were not.

“Charles Marquardt had to work at his liquor store, and chairman Larry Ward was absent and unresponsive. Without the required quorum of three commissioners, this biennial draw, one of the very few commissioner responsibilities … couldn’t happen,” Mello wrote, describing what he saw and heard while sitting at the meeting watching staff try to pull together quorum.

Waxman said she would not comment on “what was going on with commissioners.”