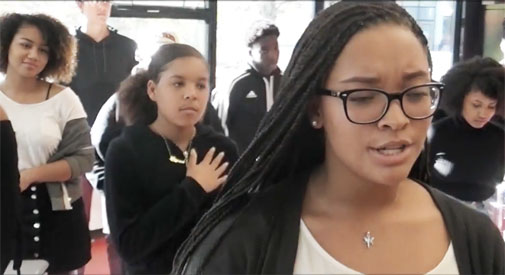 The nearly 20 students wanted their first project to be an invitation to everyone to think about the issues, including people coming at them from different perspectives. They wanted it to be different, to honor history and different voices. They wanted to emphasize their identities as teenagers. The students, Dua said, did research on how to foster a dialogue, and chose to create a video.

Lt. Gen. Jay B. Silveria, superintendent of the U.S. Air Force Academy, who made news when he lashed out at hate and prejudice after racial slurs were found written on the message boards of five black cadet candidates at his school.

Nine-year old Zianna Oliphant, whose impromptu speech to city councilors in Charlotte, N.C.,  after a fatal police shooting of a black man silenced the adults fighting in the chambers.

And their own, as they stand in a classroom while three fellow students sing “Lift Every Voice and Sing,” written by James Weldon and John Rosamond Johnson and reportedly read as a poem for the first time at a celebration of Abraham Lincoln’s birthday in 1900 as an introduction of honored guest Booker T. Washington to a segregated Florida school.

“As an adviser and an educator,” Dua said, “I was impressed at how it was done. They chose a member of the military and a young girl who are saying the same thing. Then we hear the teens singing a song from the era of Dr. Martin Luther King, which ties back to people’s lives. It’s not an attack on any party, any person, any group.” 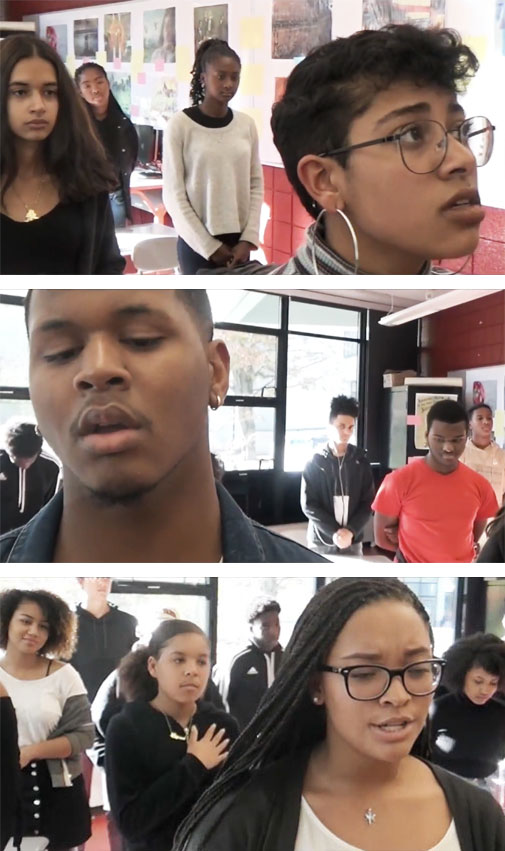 “It’s hard not to look at that and say, okay, maybe a conversation can be held,” he said.

Senior Jahnavi Zondervan can be heard as the first soloist in the CRLS class. She said the choice of song was a “natural” for her. The video nods to the debate surrounding “The Star Spangled Banner” – which the high school’s Falcons football team notably kneels for, part of protests seen nationwide at sports events; but the song in it is often referred to as the “Black national anthem,” and the students in the video stand to honor it.

“In my old school,” Zondervan said of the kindergarten-through-eighth grade King Open School she attended, “we always sang ‘Lift Every Voice’ every time we sang the National Anthem. I was surprised when I came to the high school and it wasn’t sung.”

Zondervan’s singing is followed by Richard Hinds and Leilani Pucci.

Dua, the Massachusetts 2017 History Teacher of the Year while at the Somerville schools, was drawn to Cambridge in part because he was moved by the students’ activism and their yearning to see changes in the school and community. Dua said he could see a role for himself at the school, especially in the education of students of color. It’s probably no coincidence that students’ decision to restart a Black Student Union came in Dua’s first weeks at CRLS.

Dua said he plans to show the video on campus Tuesday.