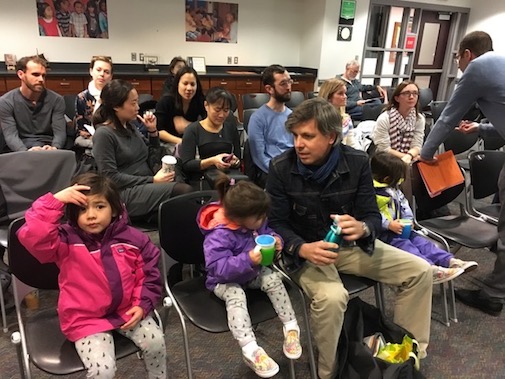 On the rocky road to the promise of world language for all dangled before parents in past years, the School Committee voted unanimously Tuesday to eliminate a four-year-old change in the kindergarten lottery that affects language immersion programs. Though applicable to the Portuguese Olá program at the King Open School, in practice the rule affected only the Martin L. King School’s Chinese Immersion program.

In an attempt to help diversify the program in terms of socioeconomic status, the committee, with parents’ urging, changed kindergarten lottery rules to allow Ni-Hao junior kindergartener “internal transfers” to have priority over others entering the kindergarten lottery for the immersion program. The hope was that more families in the “free lunch” category would be attracted to moving from Ni-Hao to the immersion program once they had had a year of exposure to Chinese instruction.

The unanticipated consequences, however, were a major blow to families who found that, although they already had one child in the immersion program, their younger child was often shut out – in direct conflict with a longtime district policy to try to keep families together in one school.

Typically, the district determines kindergarten openings in each school by counting the number of junior kindergartners in the school, and incoming kindergartners who are siblings of current students. Though “nothing is guaranteed,” as Chief Operating Officer Jim Maloney often says of the lottery, in practice younger siblings nearly always are admitted to the school of their older siblings. The internal transfers, though, were given priority over the siblings in the 2012 change, which took effect in January 2013.

In last year’s lottery, half of the incoming kindergarten siblings of current immersion program students were bumped by internal transfers, said parent Jason Homsy at the Nov. 21 meeting, repeating comments made in May. It turns out that the internal transfers have been overwhelmingly from the “paid lunch” category; it’s the paid-lunch kindergarten sibling applicants who are hardest hit in the lottery.

Although many of these siblings found a place during the school year, there is still one kindergarten sibling awaiting a seat. That child’s mother, Helen Jenkins, spoke in public comment, worried about the impact it has on younger siblings who want to be able to do what their older brother or sister is doing – speaking fluently in Mandarin – but are unable for reasons that, Jenkins pointed out, young children cannot understand.

Homsy reported that this year, there are 18 internal transfer requests for kindergarten. This not only essentially blocks most if not all siblings from enrolling, he said, but probably any other children as well.

Parent Jennifer Dunn pointed out that these internal transfer students are actually getting a second chance at the immersion program simply because of their birthdate. Only children who turn 4 years old between Sept. 1 and March 31 are eligible for junior kindergarten. They are allowed to enter the January lottery for a junior kindergarten seat. If they get into the the Ni-Hao program, they are eligible for an internal transfer to the immersion program for their kindergarten years.

But for children whose birthday is after March 31, they are not eligible for junior kindergarten. With this internal transfer rule, they were also essentially shut out from getting a seat in kindergarten Immersion program class.

Parents have long wanted a full world language program in Cambridge Public Schools, but it wasn’t rolled out with the creation of middle schools as promised by former superintendent Jeffrey Young. Recently teachers have echoed worries about how to include world language within the current, already packed school day – despite educators’ frequent discussion of the benefits of learning additional languages.

On Tuesday, Dunn highlighted a benefit of Mandarin education she did not anticipate: Her son’s reading disability did not appear in Chinese. “Every day he was given a chance to be just like anyone else in learning Chinese while learning to decode English,” she said, “While he is a young work in process, it may very well have saved him.”

After working with members Patty Nolan and Emily Dexter for a solution, King School parents supported a motion reworked from one filed and calendared Oct. 3. The final motion allows sibling priority over internal transfers for the school lottery one year from now – in January 2019 – but grandfathers in the right of current kindergarten Ni-Hao students to transfer to first grade for the next school year. Though it perpetuates the anomaly for one more year, Nolan and even the King parents acknowledged that it would be unfair to change the rules this late for the lottery in January.

They were joined by Graham Jones, parent of two of the 18 junior kindergarten Ni-Hao students planning on an internal transfer this year – someone who would be hurt, he said, by the late change in lottery rules. They moved to Cambridge in hopes of getting their kids into the program, he said. “The Family Resource Center told us [applying through the Ni-Hao program] would be perhaps the only way” to enter the immersion program. Noting that internal transfer policy has not led to the hoped-for socioeconomic diversity in the immersion program, Jones said “we will support Nolan’s revised motion to change the policy next year.”

“We recognize that the communications were not up to the standards that we wanted,” Nolan said. That posting in October, it turned out, was the first time many of the internal transfer families had heard changes were afoot. The feedback led Nolan to tweak her motion so the internal transfer rules hold for the upcoming January lottery only.

The committee also passed another lottery-related motion undoing a change. Passage brought back a cap for kindergarten and/or junior kindergarten students.

The cap, instituted for the January 2014 lottery, limited kindergarten admissions to not exceed the number of first-grade students the school could accommodate the next year under teacher contract, plus two extra spaces.

Last year, Maloney recommended removing the cap because there had been no difficulties in keeping first-grade classrooms at or below the maximum. The reinstatement is because “two immersion programs” – Chinese and Amigos – do face issues for next year’s first grade. Both those buildings are “tight,” and there has been no room to add more classrooms, which is how a problem with a cap is avoided in some other schools.

This post was updated Dec. 1, 2017, with clarifications about the motion revived from Oct. 3.