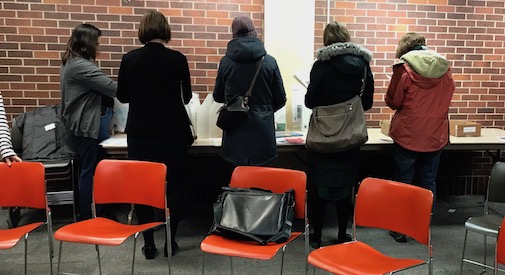 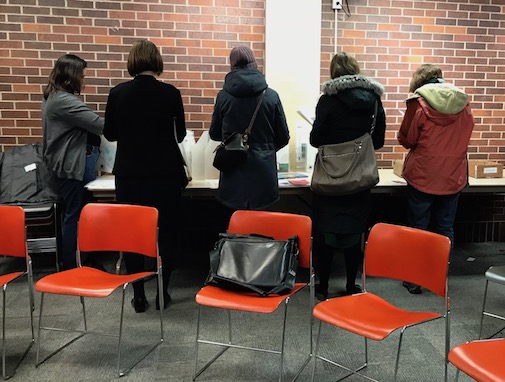 The “Small Press Collection” of zines is perused Thursday at an opening reception at the Somerville Public Library. (Photos: Marc Levy)

Before the Internet, there were zines – the small, often intensely personal publications copied off in feverish, after-hours abuse of office copy machine privileges as a way to pass on thoughts on punk music, serial killers, turbulent times or breakfast cereal conspiracy theories.

On Thursday, the Somerville Public Library introduced its regionally focused “Small Press Collection” of zines. An opening reception attended by a small crowd of fans and creators heard from artist and librarian Tim Devin, who has been organizing the collection effort over the past year, and speakers Jef Czekaj, who went from zines to writing and illustrating children’s books, and Pagan Kennedy, whose pioneering “Pagan’s Head” zine turned into a career as an author and columnist, including for The New York Times. 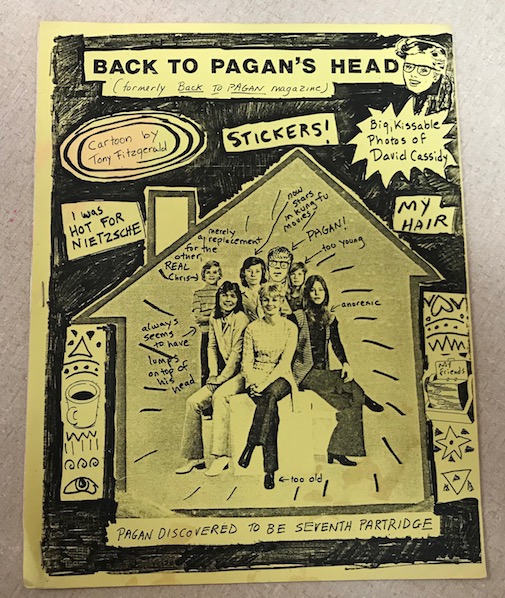 “There was this underground network of people sharing a very slow-motion bunch of blogs,” Kennedy said, reminiscing about her arrival in Allston in the late 1980s and early 1990s, when the Internet was too clunky for common use and all of her housemates were making their own magazines and “having so much more fun than I was.”

In figuring out how she wanted to join the zine world – no John Wayne Gacy, no poetry, yes to the Partridge Family and autobiographical tales of an ovarian cyst – she became what Wired magazine later dubbed “Queen of ’Zines.”

At the time, though, “I can’t even tell you how strange this was to people,” Kennedy recalled.

It’s not so strange today, after an era in which personal homepages and then blogs, YouTube and Twitch channels, social media and podcasts have proliferated, turning anonymous voices into pundits earning potentially millions of dollars a year. 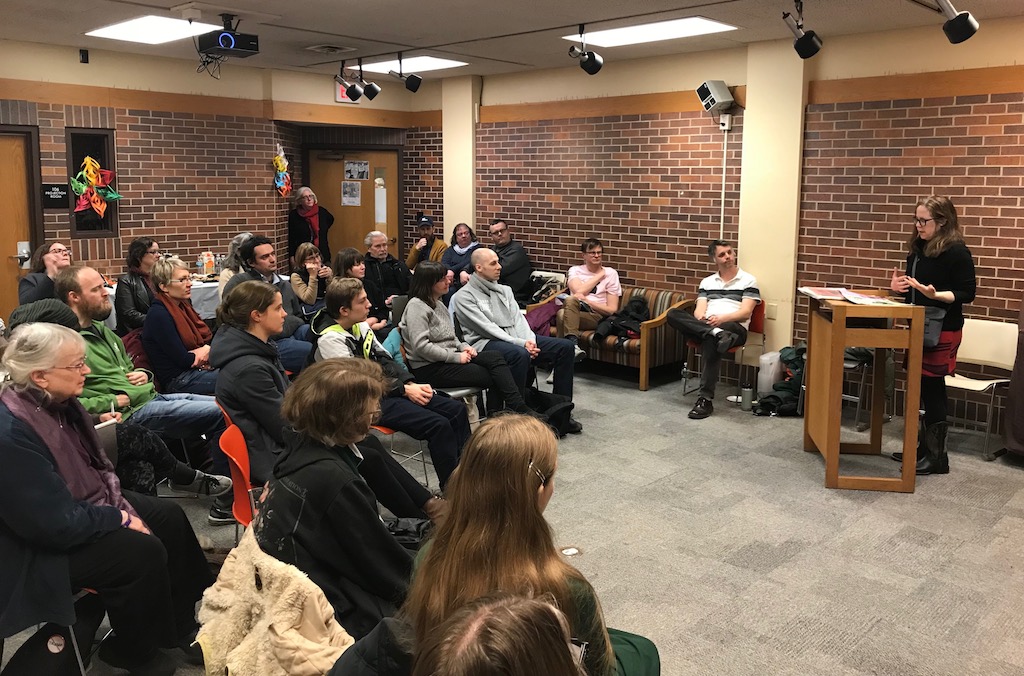 Czekaj told of a time growing up in upstate New York when, miserable because he had health problems and no friends, he decided to create a zine in his chosen format: as a mini-comic. “I didn’t know how to draw. It’s hard to remember exactly what my motivation was,” he said. But he was excited when he got reviewed by Factsheet Five, a magazine that reviewed zines, further excited when we was later able to move to Boston, where he knew zine culture thrived (centered around Harvard Square and impromptu Allston Mall punk parties), and even more excited when he visited The Million Year Picnic comic book store in Harvard Square and asked workers if they wanted to resell copies of his zine – and they took 20 of each. 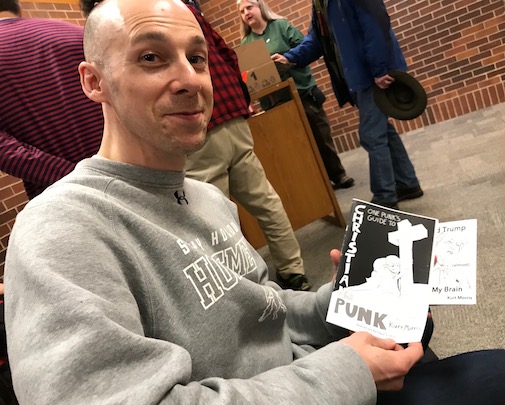 Music critic Kurt Morris shows off some of his most recent zines at the reception.

The audience Thursday included librarians and comic book store workers with extensive knowledge of the culture, intrigued newcomers such as zine-curious aspiring writer McKenna Marsden and old hands such as Kurt Morris, a music critic who began doing zines when he was 15 or 16 and said he was shocked to find he was still contributing to them and putting out his own – at a loss – at 38, investing time, money and care on high-quality screeds against President Donald Trump or an analysis of Christian punk because “I want people to really hold onto it.”

The examples of zines shown off by Devin included everything from a glossy-bound book of prints called Accordion to a biographical comic by local artist Dave Ortega in the format of a newspaper. A blue environmental pamphlet the size of a napkin called “Cheep Peach Plastic Beach” kept folding out to the size of a placemat, with the art expanding with every step; the multicolored and mysterious “Zanty Misfit Dreambook” was hand-sewn, and came with dangling charms attached by thread. 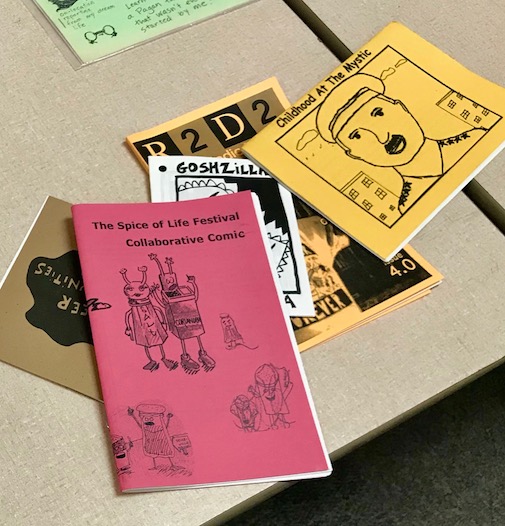 More zines contributed to the Small Press Collection, including work by Czekaj.

The area is not short of zine collections; the 14-year-old volunteer and newly nonprofit Papercut Zine Library recently moved back to Harvard Square’s Democracy Center from Somerville with some 15,000 zines, and there are collections at Harvard University libraries as well, such as the gender-focused collection of Zines at Schlesinger Library. The Somerville Public Library’s collection is unique in that Devin has focused it on publications from “Greater Somerville.”

“Boston has this whole history of small-press publishing, but nobody’s really collected this stuff. As a result, a lot of it is just gone. It’s a shame,” Devin said, using as an example the disappearance of all but a few issues of the Popwatch music zine put out by Somerville’s Leslie Gaffney. “The Somerville Public Library feels strongly about supporting local culture and local voices, and not just voices that get the stamp of approval from large publishers – not that there’s anything wrong with that. This is another way to do that.”

The Small Press Collection is stored near the graphic novels on the second floor of the Somerville Library’s 79 Highland Ave. building on Prospect Hill, with items made in 2000 and beyond generally available for checkout. The collection launched with some 160 items, including rarities from the 1980s and 1990s contributed by Kennedy that on Thursday earned her a Staplery award – a stapler wrapped in tin foil, presented to her by Devin. Donations to the collection are welcomed.

This post was updated Jan. 31, 2018, to identify the “Small Press Collection” as the new name for the zine catalog.