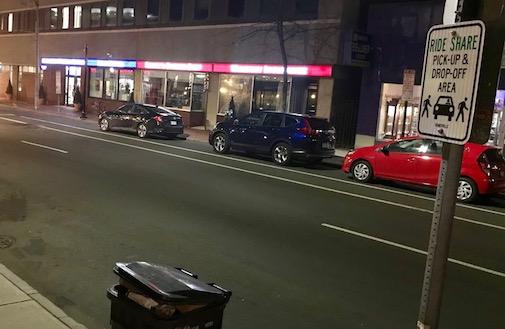 A sign delineates a space to be used by drivers for ride share pickups and drop-offs in Somerville’s Davis Square. (Photo: Marc Levy)

Cambridge is beginning to look at carving out space for ride share services such as Lyft and Uber to pick up customers, said Joseph Barr, director of the Traffic, Parking & Transportation Department.

There’s a test case underway just across the town line in Davis Square, where Somerville set aside five car drop-off and pickup spaces starting in December that are open to the public, taxis and ride share services. There are three spaces in front of a large Citizens Bank on Elm Street; one on Holland Street across from a T stop entrance; and another at 414 Highland Ave., in front of a nail salon.

The change was necessary in one of Somerville’s busiest areas “to reduce double-parking and improve safety for all,” Mayor Joseph Curtatone said in a Jan. 11 press release. A study of the area in August showed a dozen examples of double-parking within just two hours on a Friday night at the Citizens Bank.

Though there are obvious hot spots for transportation clogs and conflicts in the city, such as in Harvard and Central squares, it is too early to say where Cambridge might implement its own such spaces.

“It’s something we’re starting to discuss internally. We hope to in the not-too-distant future at least be able to pilot something,” Barr said Monday. “We are not as far along as Somerville.”

Somerville officials said they would go on adjusting its Davis Square plan as needed and would also be using it as a model in looking at pickup and drop-off spaces elsewhere in the city.