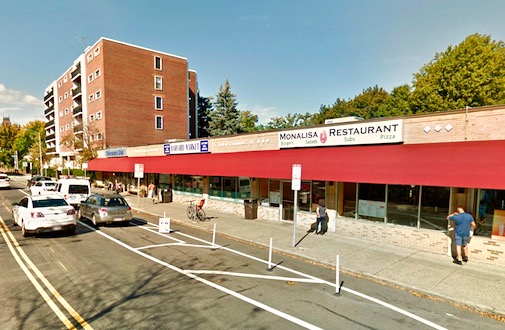 A Cambridge Street bike lane has been dividing residents in addition to keeping bikes and cars separate. (Photo: Google)

Protected bicycle lanes on Cambridge Street will remain in place and stay largely as is, officials said Monday, a disappointment to several citizens who came to the City Council to complain it was unsafe and hurting businesses – and to councillors who also thought they were seeing a bike lane concept test rather than a permanent installation. 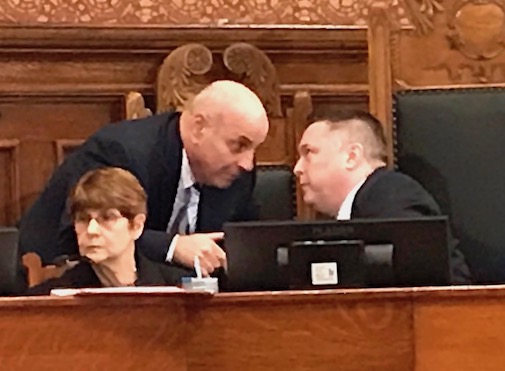 City Manager Louis A. DePasquale took the unusual step of breaking into the council agenda to make a statement on the bike lanes as well as the similarly contentious issue of a redesign for Inman Square: Plans are pretty much set.

“I stated when we put these separated bike lanes in that we were in somewhat uncharted waters and we were going to evaluate and we would make tweaks and adjustments,” DePasquale said. “I committed that we were going to make these lanes work in the long term, and I really think we have been moving in that direction.”

Installing a bike lane next to a Cambridge Street sidewalk eliminated some parking spots and moved others to a space between car traffic on the right and bicycle traffic on the left. Critics say it complicates deliveries for businesses, leaves the old and sick feeling vulnerable as they navigate a greater distance to pick up prescriptions at Skenderian Apothecary and squeezes cars into tight lanes that leave them nowhere to go if an ambulance, fire truck or police car needs to get through.

The lanes, installed in August from Quincy Street to Antrim Street, was already due for formal discussion in spring, after the city had a chance to pull together enough data for a serious assessment, said DePasquale and Joseph Barr, director of the Traffic, Parking & Transportation Department. A protected bike lane on Brattle Street in Harvard Square has also been promised a new look.

Nearly two dozen members of the public came out to support or oppose the lanes Monday after hundreds of emails flooded council inboxes over the weekend, split equally between pro and con; the nine council members entered debate just as divided. Councillor Tim Toomey called the lanes simply “a disaster.”

Pilot nature up in the air

It was an order by councillor Alanna Mallon, co-sponsored by Mayor Marc McGovern and councillor Craig Kelley, that challenged the city manager’s approach, saying “consistent feedback [that the Cambridge Street lanes have] not yet met the city’s goal of increasing safety for all” justified a call for action with a “new working group” – with the understanding that everything was on the table for reconsideration.

“At the meetings I went to, [the lanes] were referred to over and over as a pilot program, and what went up was very temporary looking. That’s what our residents heard when they went to meetings and that’s what they saw when the bike lanes went in,” Mallon said. “It felt temporary, was called a pilot and that there would be a call for reevaluation, and that’s what they’re reacting to.”

There’s some cause for confusion: When the council ordered bike lanes in October 2016, it was for “pilot program protected bike lanes,” but when the Cambridge Street lanes went in the next year it was identified as a “bicycle safety demonstration project” – a potential model for other streets in the city.

Worked up over group

And while Mallon’s order referred to a advisory group that “previously existed” in calling for a new working group to be formed, councillor Quinton Zondervan said he couldn’t vote for an order that ignored that the original group was still in place, waiting to be called together in the spring.

Mallon also felt the first group had been flawed in who it gathered and in its facilitation by city’s staff, noting that some stakeholders walked away before the work was done. But questioning the validity of a city process is hardly unique to this project; similar charges have been leveled over the “C2” reenvisioning of Central Square, Harvard Square kiosk and plaza planning and a lighting task force.)

Broadening the existing working group was a compromise, but not a surefire one, McGovern said.

“There’s no guarantee that because we have everyone at the table that everybody’s going to walk away feeling good about what the decision is. In fact, that’s probably unlikely in this case. I’m certainly for bringing all those different groups together, but if the result of that group is recommendations some of that group don’t like, it’s not that they weren’t listened to – it’s that another decision was made,” McGovern said. “There’s a difference between listening and agreeing.”

With councillors’ debate nearing 50 minutes and centering at times around single words in the phrasing of Mallon’s order, McGovern gave a few reminders that he saw Mallon’s order as reaffirming a process that was already due, and that the city manager had made the city’s position clear: “Those lanes – we may tweak them, but they’re staying.”

“For me, the stakeholder group is about how do we minimize impact and make sure we’re doing it right, but not about whether we’re going to do it. We’re doing it,” McGovern said.

Still, despite him urging councillors not to “wordsmith this to death” given the somewhat predetermined nature of the outcome, the council divided over whether the order was to reconvene the existing working group (an amendment proposed by Zondervan that failed 4-5) or “establish a new working group” (Mallon’s original language, which passed 5-4).

That last idea could face opposition from transportation planners. One benefit of the plastic bollards is that cars can run over them without damage if they need to get right to make room for emergency vehicles. With residents calling the design dangerous because drivers have nowhere to go and Mallon proposing planters that would be more likely to damage a car, it was clear the benefit is little known.