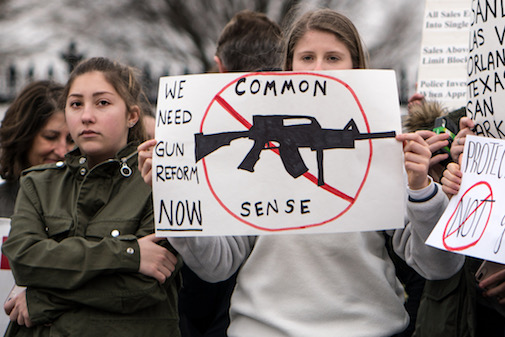 Students protest at the White House in Washington, D.C., on Feb. 20, after 17 students were slain in a school shooting in Parkland, Florida. (Photo: Lorie Shaull via Flickr)

In the wake of the Valentine Day’s school shooting in Florida, President Donald Trump and the National Rifle Association have repeated calls to have more armed staff in schools, with Trump suggesting paying teachers extra as incentive to having them pick up guns. “You give them a little bit of a bonus, so practically for free, you have now made the school into a hardened target,” he said.

What’s the likelihood of seeing armed teachers in Cambridge public schools, in addition to its armed police officers?

Slim to none, according to statements by the district’s superintendent, educators’ union president and mayor.

“It is unfathomable that arming teachers would ever be a proposal that would be taken seriously in our community,” said Superintendent Kenneth Salim.

Salim said he has been reassuring concerned teachers and family members that the city does continual reviews and updates of safety and security procedures.

“Bringing more guns into our schools does nothing to protect our students and educators from gun violence. Our students need more books, art and music programs, nurses and school counselors; they do not need more guns in their classrooms. Parents and educators overwhelmingly reject the idea of arming school staff. Educators need to be focused on teaching our students. We need solutions that will keep guns out of the hands of those who want to use them to massacre innocent children and educators. Arming teachers does nothing to prevent that.”

Mayor Marc McGovern dismissed Trump’s suggestion as “yet another foolish policy that is meant to distract the country from the real conversation we should be having, which is how do we pass meaningful gun control measures and how to not let the NRA control this conversation.”

In Trump’s on-the-fly policy-making, he guesstimated that between 10 to 40 percent of school staff nationwide would be qualified to handle a weapon, according to The New York Times. But to his notion that ex-military and ex-police officers now teaching can pick up arms, Cambridge schools’ Human Resource Officer Barbara Allen and the union’s Monahan both said there is “no real way of knowing” how many, if any, of the district’s staff would qualify. Neither tracks these statistics because “they are not particularly relevant to the many, many qualities, experiences and credentials CPS seeks in its teachers,” Allen said. 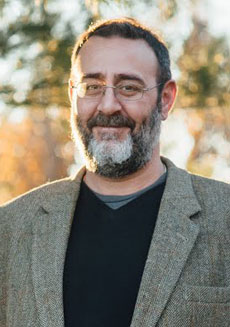 Jesse Kaplan has been a special education math teacher at Cambridge Rindge and Latin high school – now in his 16th year of teaching – and is a U.S. Army veteran who served in Saudi Arabia and Iraq who said he has “considerable experience with assault rifles in the military.”

“It is just such a ludicrous idea” to expect teachers to take up arms, Kaplan said. “At the end of the day, regardless of the training, it is unrealistic to add this responsibility to a teacher’s duties. Nobody who signed up for teaching signed up for this. Students and fellow staff members would be horrified if I or anyone carried a gun at school.” Kaplan was clear that his assault weapon days were confined to the military.

Asked if he had any idea what portion of Cambridge staff members were veterans, Kaplan said it is “inevitable,” given the amount of years the country has been at various wars, “that we will have more veteran staff,” though he said he was aware of just two at the high school aside from himself.

Cambridge has an armed officer assigned to each school, said Jeremy Warnick, director of communications and media relations for Cambridge police.

These Youth Resources Officers – who are fully trained police officers – are “a valuable asset,” said Warnick, part of a program that connects officers to school students, staff, families and outside organizations to create a support system for schools and individual students. CRLS and the High School Extension program each have one dedicated, full-time officer. Other officers are split between two or three schools (the two officers with three schools cover one upper schools, the elementary school in the same building, and one other elementary school feeding into their upper school).

The officers work with the schools to resolve issues before they become criminal and to partner with individual students, families and schools to create “diversion strategies” alongside their investigative duties. This Safety Net Collaborative program was recently credited in a WCVB-Channel 5 story as the reason for Cambridge’s significantly lower rates of arrests on school property compared with other urban school districts.

Warnick said that he has not received inquiries from worried parents since the Florida shooting, which is somewhere between the seventh and eighteenth school shooting of 2018 depending on how “school shooting” is defined (seven of the incidents have been attacks during school hours in which someone intended and succeeded in injuring people, according to tallies by everytown.org, a gun opposition nonprofit). The police get more inquiries after local events, Warnick said, pointing to past years’ school bomb threats as times the department heard from a lot of parents.

Warnick said the police department declines to make any statements on whether teachers should arm themselves.

Organizers behind the popular Women’s March that have arisen since Trump’s election have called for a nationwide 17-minute walkout of teachers and students on March 14 – one minute for each victim of the Marjory Stoneman Douglas High School shooting in Parkland, Florida. Other organizers are planning a March for Your Lives in Washington, D.C., for March 24. On Monday, however, the National Parks Service reported that there were already applications in for using the National Mall that day, and they were working with the group to find another location.

Another movement, spurred by Connecticut students near Sandy Hook – the scene of a December 2012 elementary school shooting – is calling for a National School Walkout on April 20, the 19th anniversary of the Columbine School shootings in Littleton, Colorado, which at the time was the worst school shooting in national history.

Cambridge students and staff have not finalized plans. On March 14, the high school has a delayed opening with teacher-parent conferences scheduled for 8 to 11 a.m. Teacher “strikes” are illegal under state law, and some staff were reportedly trying to work out whether a “walkout” of 17 minutes keeps the event from being illegal.

Update on March 5, 2018: Student organizers from Cambridge Rindge and Latin School confirmed in an email that there would be a March 14 walkout and rally, “with hundreds of people set to participate, including CRLS students, teachers and community members,” later than most because of the pre-scheduled delay due to parent-teacher conferences. The walkout will begin at 2:10 p.m. and include a moment of silence at 2:17 p.m. Speeches may go on after the school day ends at 2:30 p.m.

Salim’s email also addressed potential walkouts, which may give comfort to concerned staff. “CPS will neither promote nor punish these actions,” he wrote. “Principals and administrators have been asked to maintain an open-door policy for any students or staff members who wish to participate in these types of actions … We respect the right of all individuals to exercise their free speech.”