‘A Wrinkle in Time’: Bringing novel to life, DuVernay is brilliant, but best at the dark 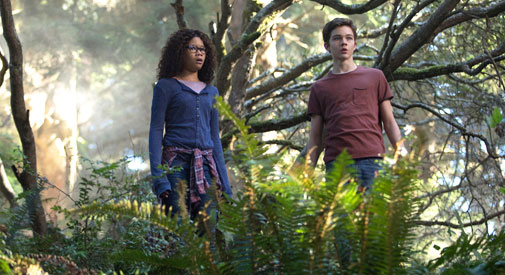 ‘A Wrinkle in Time’: Bringing novel to life, DuVernay is brilliant, but best at the dark

Gloriously indulgent, sentimental, moving and dripping in pastel colors, Ava DuVernay’s “A Wrinkle in Time” succeeds despite being haphazardly composed. It also is unfailingly a movie made for a younger demographic, meaning audiences looking for a stricter adaptation of YA author Madeleine L’Engle’s more philosophical leanings from 1962 may be sorely disappointed. 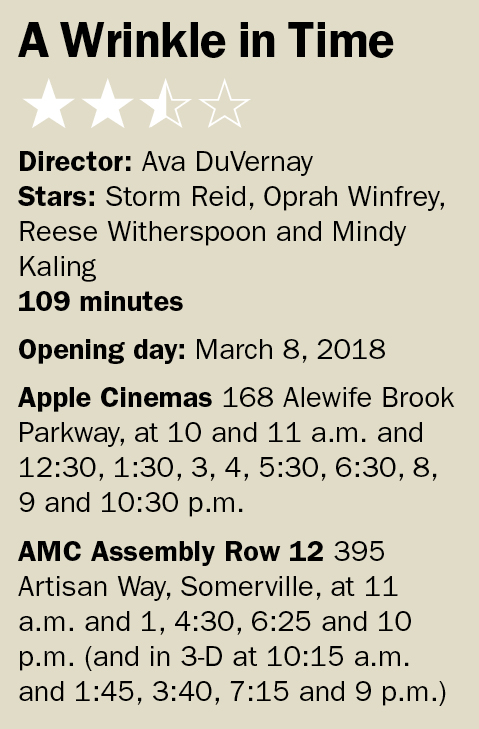 Meg (Storm Reid – fantastic) has been on a downward spiral since the disappearance of her scientist father (Chris Pine) four years ago. One day, she and her brilliant younger brother Charles Wallace (Deric McCabe) and her schoolmate Calvin (Levi Miller) come in contact with three astral travelers – godlike beings that travel time and space – Mrs. Whatsit (Reese Witherspoon), Mrs. Who (Mindy Kaling) and Mrs. Which (Oprah Winfrey) who tell her that her father is being held captive in a faraway world. To succeed in a seemingly impossible rescue mission, they must face dangers and darkness together, such as jealousy, self-doubt and the push to conform.

The inherent strengths of the film, such as the direction, emotional core, score and performances, are tempered by a script that doesn’t quite know when to play it safe or go full throttle off the deep end of weird; because of it, the first half of the film strikes an unbalanced tone and pace. The script by Jennifer Lee digs in its heels, while the images and performances surrounding it try to defy the gravitational pull of reality. This is a film that can live in simplistic planes of dialogue and explanations, but should to be allowed to embrace all that’s strange about it. Everything from the costuming to the striking cinematography by Tobias A. Schliessler and the score by Ramin Djawadi promises a larger-than-life spectacle. Lee doesn’t let us forget the heart of the story (Meg’s lack of sense of self), but does it so dryly that it nearly sacrifices the magic.

When darker notes such as issues of conformity, fear and desperation are the highlights, the writing and visuals hit a pitch-perfect harmony. (When Meg sees an idealized version of herself, in which she represents a more stereotypical, European style before ridding herself of that specific demon, is visually grim as well as thematically mature.) It’s when the concern is more about how to get from point A to point B in the plot, and not the journey that happens in between, that the entirety of the story suffers.

Luckily, DuVernay is in charge and able to add a spark to the proceedings, enlivening every frame with a refreshing gusto. The sense of adventure is palatable, no matter how long it takes for it to actually arrive. She’s strengthened by a remarkable cast with smaller, supporting roles for everyone from Zach Galifianakis, Gugu Mbatha-Raw, Michael Peña and André Holland, but it’s Reid and Pine that leave the greatest impressions. Reid is a star in the making, anchoring a film that would lose its grip without her, and Pine is so charismatic in such a few short moments that we, like Meg, miss him the moment he’s off screen.

There’s an abundance of mess in this unadaptable adaptation. The pacing is inconsistent, the driving force suspiciously lacking and the motivations of each character tend to slip to better befit moments in the film – the one that will help move the plot along. The most interesting aspects of the universe DuVernay has summoned into three dimensions – especially anything pertaining to the IT – is given only momentary attention; the film’s more intent on allowing Witherspoon, Kaling and Winfrey to mug to the cameras. Despite these flaws – and they do exist – the beauty at the heart of the film is immense. The core of this film is one girl’s struggle to not only find herself, but to be happy and content with the girl that she finds. She’s riddled with insecurities, she’s angry in ways girls her age are told not to be, she’s disorganized and can’t let herself fall into an imaginative oblivion like her father, friend or brother. Yet what makes “A Wrinkle in Time” immediately appealing beyond a star-making performance by Reid and some tremendously striking compositions is its belief in young girls’ ability to persist through darkness. Captured through light that warms that edges of the screen and spools from Meg’s fingertips, DuVernay’s vision of the story directs a stunning focus on the need for self-worth and the understanding that even in the pools of darkness in the universe, everything is connected, love conquers all fear, all doubt, and it takes only a spark of hope to lead a wayward soul home.